Review: 'Tolkien: Maker of Middle-earth' at The Morgan Library & Museum 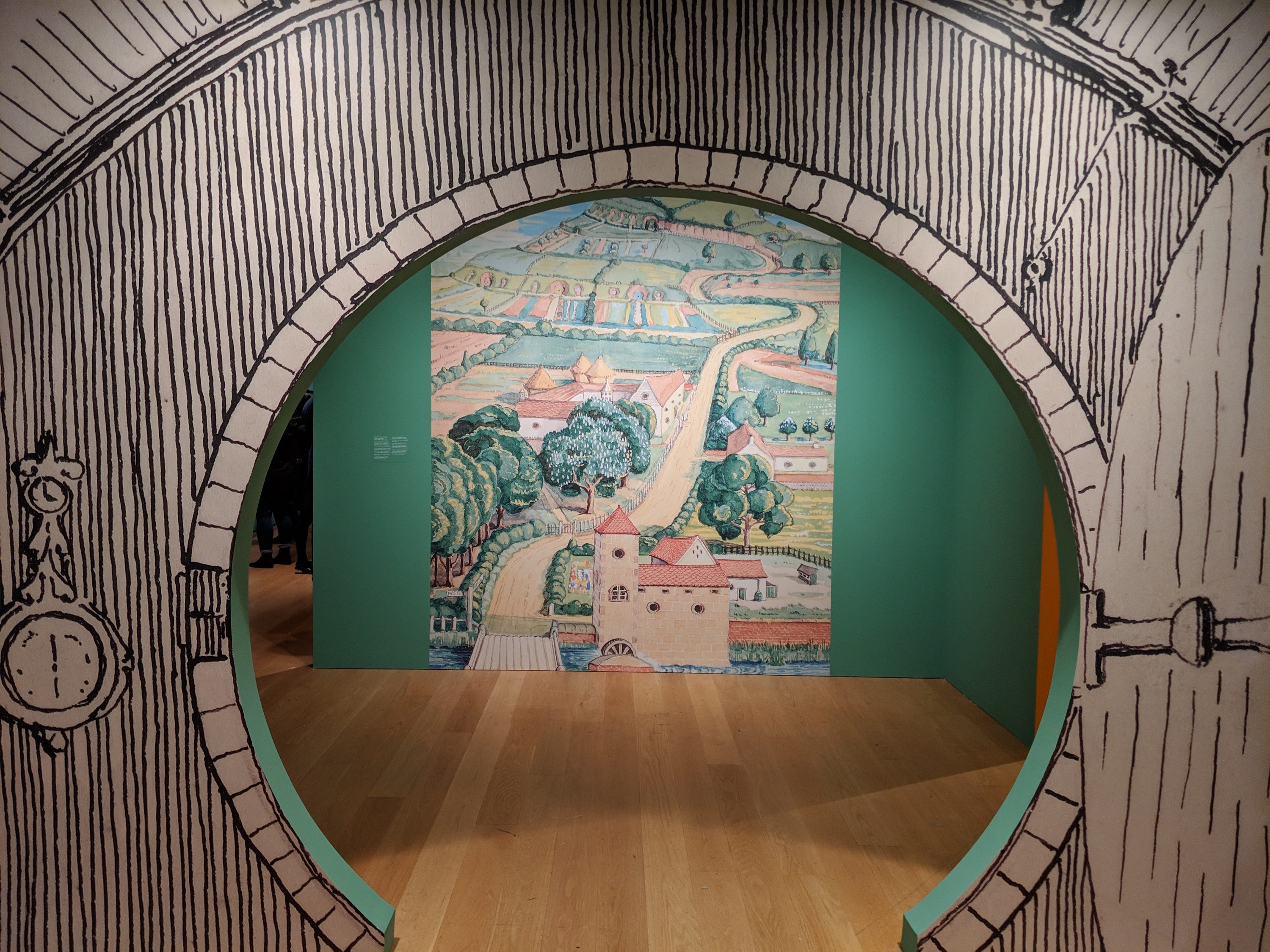 John Ronald Reuel Tolkien's fantasy world Middle-earth had been decades in the making before The Hobbit was published in 1937. An orphan by age 12, Tolkien cradled a pure, child-like imagination his whole life. He began creating the language of his Elves when he was a teenager, he illustrated fantasy worlds in striking watercolor paintings that would influence his vision for Middle-earth's landscapes, and he began writing lore for the nascent world in a unique, arabesque script that closely resembled that of his deceased mother. Until May 12, these manuscripts, paintings, and other personal items of the author are on view at the Morgan Library and Museum in New York City, in its captivating exhibit "Tolkien: Maker of Middle-earth." It has drawn crowds of fans eager to see the genesis of The Lord of the Rings—last century's most influential and beloved fantasy series described by Tolkien's friend C.S. Lewis as "a lightning bolt from a clear sky."
The exhibit proves that most Middle-earth fans are as invested in Tolkien the man as the lore itself. You're unlikely to find a more polite museum crowd. Quiet visitors patiently waited in lines until their turn to get a close look at photographs from Tolkien's childhood, to read love letters he wrote to his wife, or to get a look at his artwork and manuscripts. No one took photos of the displays, as is common in museums these days—it was as if the papers with sprawling script were delicate relics of Middle-earth itself.
Tolkien was born in 1892 in a small town outside of Capetown. His father was working with the Bank of Africa and died when Tolkien was four years old. Tolkien, his younger brother Hilary, and his mother Mabel moved to a cottage in Warwickshire, outside of Birmingham. The rural life inspired Tolkien's peaceful visions of hobbits and the Shire, while his mother spurred his interest in etymology. When Mabel died in 1904, she left her sons under the care of a Catholic priest.
Tolkien's strict Catholic upbringing is reflected in the spiritual undercurrent of his works, where love, hope, faith, egalitarianism, and courage triumph over evil. Similarly, his years fighting in World War I drove his theme of human responsibility to protect pristine nature against industrial destruction. The emotional torture of war is also indelibly described in The Lord of the Rings.
Love is seen at its most powerful in Tolkien's story of the man Beren and elf maiden Luthien
Tinuviel, which is central to The Silmarillion. He based this story on his own love for his wife, Edith. Many versions of the tale were written, and hand-written manuscripts lie waiting for visitors at the library, beside soft color pencil drawings of emblems for elves.
The most powerful pieces in the entire exhibit showcase Tolkien's talent as an illustrator. He insisted on painting illustrations and the original dust jacket for The Hobbit, and his publishers were delighted with the results. An ink drawing of "The Trolls" is exquisitely detailed, with curling wisps of fire lighting up a thicket of trees. An illustration of the city Rivendell glows with bright color and light—a suitable nestling place for elves in a valley. The drawing of Bilbo floating on a barrel down the river to the "Huts of the Raft-elves" beguiles with its color and composition; the drawing is reminiscent of stained glass.
The exhibit also comes with surprises: Readers of manuscripts will learn that the beloved tree-ent Treebeard was originally cast to be evil, while Gandalf the wizard was almost named Thorin.

The most exciting manuscripts on view are those of The Lord of the Rings. The three-part series took Tolkien 14 years to write. Before he began, he drew detailed maps—now hanging on the exhibit's walls—which helped situate his world and make the distances his characters traveled as realistic as possible. He developed charts for the characters that explained their backgrounds and connections. Only then did he begin to write his masterpiece.
"It is written in my life-blood," Tolkien said, "such as that is, thick or thin; and I can no other."
Draft title pages show "The Magic Ring" crossed out, with "The Lord of the Rings" written below. When the manuscript was being finalized, Tolkien created a new title page, writing the title in runes at the top, in the Latin alphabet in the middle, and in both the Elvish scripts Tengwar and Quenya at the bottom.
One visitor clutched his friend while reading what could be considered the exhibit's piece-de-resistance: the manuscript containing the famous "Ring Verse."
"One Ring to rule them all, One Ring to find them," the visitor whispered, "One Ring to bring them all, and in the darkness bind them." He then started crying.
Certainly the exhibit aptly demonstrates how Tolkien's work has affected his readers for decades. (Some more than others—you can sort out the indifferent visitors who were dragged along, thinking, "I never knew my friend was this much of a nerd.") What else would you expect, though, when Tolkien's life was utterly devoted to Middle-earth?
But visitors see that he was also a family man, a good father and husband. Despite his work as a professor of English at Merton College, Oxford, he managed to find time to invent stories for his children. The most charming in the exhibit are Father Christmas stories accompanied by delightful watercolor illustrations, with plots that turned stranger and darker as his children grew older. In one tale, Father Christmas and his polar bear friend fend off hordes of goblins.
In 1913, Tolkien painted a bright and wistful watercolor: "There (when you don't want to go from here) & Here (in an exciting place)." A portentous purple, red, and blue-gray mountain at the top of the page represents "there," while "here" is shown in a circle containing chimerical, mushroom-like trees. Tolkien, like any ordinary human being, was afraid of the unknown—much like his hero hobbits Bilbo and Frodo. The hobbit, perhaps, is a reflection of Tolkien himself: a lover of simple pleasures and brimming with child-like wonder, but capable of courage and adventure. The hobbit represents the ability of one single being to make a leap into the unknown and generate incredible waves of change. And what did Tolkien do if not that?
Posted by jtf at 8:35 AM