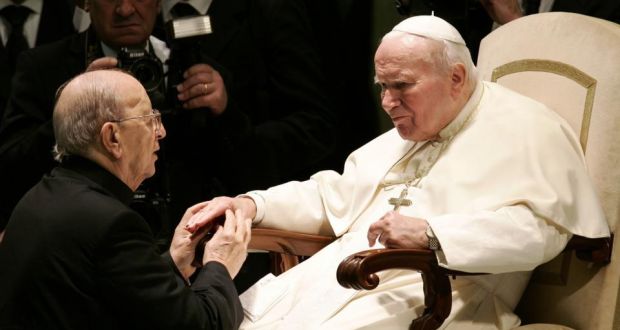 Cardinal João Bráz de Aviz, prefect of the Congregation for Institutes of Consecrated Life and Societies of Apostolic Life, has disclosed that the Vatican had documents on the abusive conduct of the disgraced founder of the Legionaries of Christ, Father Marcial Maciel, from as long ago as 1943.
The Brazilian cardinal told the Spanish Catholic online magazine Vida Nueva that “those who covered it up were a mafia, they were not the Church.”

Maciel was publicly accused of sexual abuse by nine men in 1997, but the order denounced them vigorously as liars and opportunists. Members of the order and its lay auxiliary, Regnum Christi, used to phone me regularly at National Review in 2002 to urge me to write pieces condemning the persecution of Father Maciel. I didn’t do it. I didn’t know for sure that Maciel was guilty, but I knew I was being spun.
Maciel was a favorite of John Paul II, who loved him for his orthodoxy; it surely didn’t hurt that Maciel always brought lots of money to Rome to spread around. The Congregation of the Doctrine of the Faith, then run by Cardinal Ratzinger, announced in 1999 that it was not going to investigate the allegations from the nine. Some blamed Ratzinger, but others said that he was following John Paul’s orders. I believe the latter, given that a few days before John Paul died, when he was totally incapacitated, Cardinal Ratzinger ordered Maciel to leave the order. Ratzinger re-opened the investigation, and then ordered Maciel removed from ministry. It came out that Maciel had also had several “wives” and had fathered several children. He died in 2008, unrepentant. An exorcist was present in the hospital room.
In 2010, a lawsuit filed by Maciel’s secret sons alleged that their father had sexually abused them too. Yes, the all-holy founder of a militantly conservative Catholic religious order not only secretly had wives and children, but also allegedly molested those children.

“[Marcial Macial, his father] told me that his uncle sometimes made him masturbate him and basically the idea of my dad was to transmit that idea to me,” said Gonzalez.
His father also instructed him to take photographs with a Polaroid camera.
“My feeling is those photos maybe were passing to other people, like pornography,” Gonzalez recounted during the interview in which he broke down and cried when describing the abuse by his father.
“He would always tell us how to kiss, and we had to kiss him because that was the way we were going to learn how to kiss a girl when we grew up,” Gonzalez said.
Gonzalez says that over nearly a decade of repeated abuse, he never confronted his father about the sex acts or the revelation that he was a prominent priest.
He said his father, even after acts of abuse, always told him, “‘Go to mass, don’t smoke, don’t drink.'”

Jesus, Joseph, and Mary, have mercy.
Think about this new revelation: the Vatican had compromising material on Macielfor over 60 years, and let him do his thing. This cardinal saying those who covered it up were “a mafia … not the Church” is lying, to others and probably to himself. Yes, they were a mafia … and they were also leaders of the Church.
The traditionalist Catholic blogger Steve Skojec notes that on the same day that Pentin’s report appeared, Legionaries of Christ worldwide openly celebrated the founding of their order.  Skojec is unsparing of the LCs, because he was once part of Regnum Christi. He writes now:

I am not, I must admit, unbiased when it comes to the Legionaries of Christ. I have a long history with them. They were a profoundly formative influence on me – and they almost cost me my faith. I am fortunate inasmuch as I was never a victim of the sexual abuse that finally brought down their founder. But he created a fiction – an organization designed to give him power, money, and access to victims – dressed up in a superficial veneer of Catholic orthodoxy that drew in countless good men and women wanting to live their faith in a difficult time in the Church. It used up many of them and tossed them out, hurting and lost. It was essentially a spiritual bait and switch, with loud papal approval, and it has damaged countless souls.
I was one of them.

Skojec talks about how, as a teenager and young man, he lived with the Legionaries, went on mission trips with them, and was being groomed for the priesthood by them. But something was wrong. He finally talked to a parish priest about it, and the priest urged him to get away from the Legion for his own good. And then:

The Legionaries didn’t do amicable separations. It was a cult operation, and you were either all in or all out. They deployed Saul Alinsky’s thirteenth rule against me so fast it made my head spin: “‘Pick the target, freeze it, personalize it, and polarize it.’ Cut off the support network and isolate the target from sympathy.”
The Legionaries contacted my friends around the country in other assignments. They contacted my acquaintances. They called my girlfriend’s mother and sister – and I had never even met her sister. They began telling everyone who knew me that I had left because I “wasn’t generous” and that they should not get involved with “what happened between Steve and the Legion.” One friend was told by a couple of seminarians that he didn’t really know the “whole story” of what I had done. Another had it explained to him as follows: “You have to look at it like you and Steve were marching into battle together up a mountain. On the way up the mountain, Steve was shot and fell back down the hill. But you have to leave him behind. The war must be fought. You have to press on. There’s no time to look back.” When my friend laughed in the priest’s face about this, the priest insisted, “He’s a fallen comrade. You have to leave him behind.”
Many of these friends stayed with me. Eventually, many of them came to also see the truth and left. Some are now the godparents of my children, twenty years later. At the time, though, the damage these betrayals did to me, and to my faith, was incalculable. The Legionaries were not just something a person could be loosely associated with. They became my identity. They became my way of relating to God. They became my surrogate family and, in a way, my surrogate Church. They had so long acted as though the Legionary way was superior, that the standard institutions of the Church were so inferior, that they had created in me an active dislike of any manifestation of “normal Catholicism” as something beneath us. They would go on and on about the poor formation of diocesan priests and bishops, make hostile comments about other religious orders, and constantly hold themselves up as the foot soldiers of Christ in this grand battle for the soul of the world.
Maciel was at the heart of all of it, being deified as a living saint who never said no to Christ.
I was a member of a cult, and the cult subverted the good of the individual to the good of the enterprise – which existed to serve the cult leader. Even though I never had a conversation with Maciel, my entire life was dominated by the culture he created. And even these outward rings were incredibly damaging.

Please read the rest of Skojec’s account of how the Legion worked (works?), and his stories about trying to fight their recruiting on his Catholic campus (Franciscan University of Steubenville). Incredibly, given the satanic evil at the heart of the order, the Vatican did not suppress and disband it. Skojec speculates that this is because the Legionaries had a well-deserved reputation for cultivating wealthy Catholic donors. Skojec:

Doesn’t it always come down to this? Every time the Vatican allows corruption to go unchecked, follow the money. It was the story with McCarrick, arguably the Church’s most prolific fundraiser, and it has always been rumored to be the story with the Legionaries. It is an awful thing to consider that such a base motivation can be used to allow evil to flourish by men who are supposed to be entirely devoted to God.
But how can anyone take the Catholic Church seriously on the sex abuse crisis, when the Legionaries of Christ are a textbook case study of the Church’s failure to act on information it had for decades? As long as they continue to exist – no matter how many times their constitutions are changed and they attempt to rebrand themselves – they stand as a black mark against the credibility of the Holy See in dealing with the corruption of clergy and predation on those in their spiritual care.

Read the whole thing.
So, Pope Francis has just released an eight-page letter to US bishops, now meeting privately at Mundelein Seminary. I just read it, looking for parts to comment on, and excerpt. It’s just talk. Somewhat encouraging talk, but just talk. Why won’t the Pope answer the Vigano accusations directly? It’s because Archbishop Vigano perfectly well knows about the “mafia” in the Vatican responsible for these things.
Posted by jtf at 8:31 AM