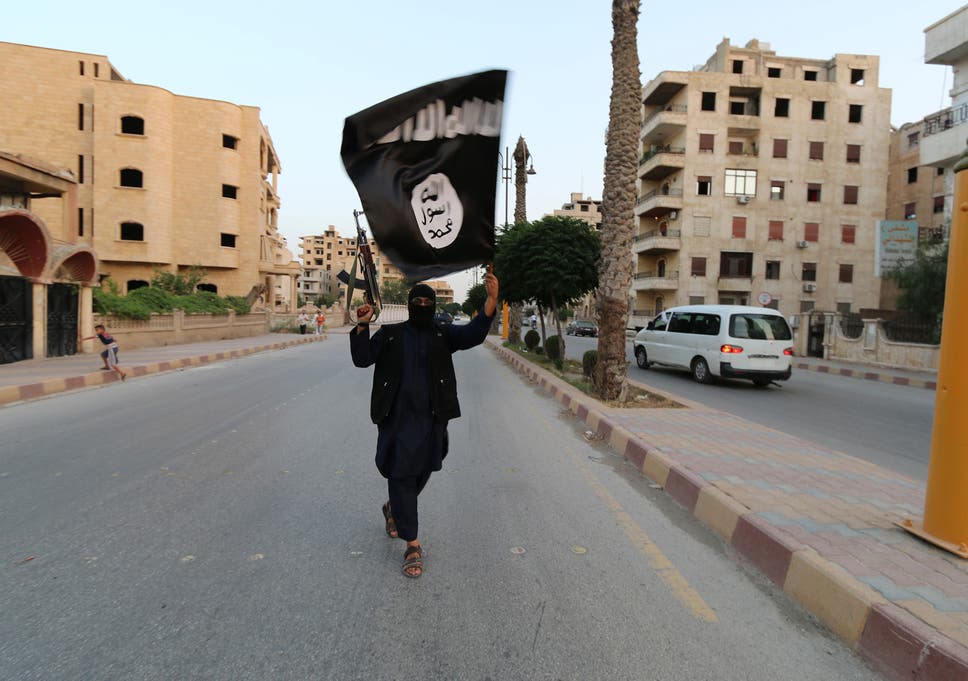 (AFP)
There has never been any vacuum in Syria (or Iraq). Sharia supremacism fills all voids. In focusing on ISIS, David discounts sharia supremacism as “an idea.” But it is much more than that. It is a cultural distinction — even, as Samuel Huntington argued, a civilizational one. It will always be a forcible enemy of the West. It doesn’t matter what the groups are called. You can kill ISIS, but it is already reforming as something else. In fact, it may no longer even be the strongest jihadist force in Syria: Its forebear-turned-rival al-Qaeda is ascendant — after a few name changes (the latest is Hayat Tahrir al-Sham, the Levant Liberation Organization) and some infighting with other militant upstarts. There is a better chance that ISIS will reestablish ties with the mothership than fade away.

The fact that al-Qaeda, which triggered the “War on Terror,” does not factor into American clamoring about Syria is telling. The anti-ISIS mission David describes was not always the U.S. objective in Syria. First we were going to pull an Iraq/Libya redux and help the “moderates” overthrow Assad. But the “moderates,” in the main, are Muslim Brotherhood groups that are very content to align with al-Qaeda jihadists — and our fabulous allies in Syria, the Turks and the Saudis, were only too happy to abet al-Qaeda. Syria had thus become such a conundrum that we were effectively aligning with the very enemies who had provoked us into endless regional war.
When ISIS arose and gobbled up territory, beheading some inhabitants and enslaving the rest, Obama began sending in small increments of troops to help our “moderate” allies fend them off. But the moderates are mostly impotent; they need the jihadists, whether they are fighting rival jihadists or Assad. Syria remains a multi-front conflict in which one “axis” of America’s enemies, Assad-Iran-Russia, is pitted against another cabal of America’s enemies, the Brotherhood and al-Qaeda factions; both sides flit between fighting against and attempting to co-opt ISIS, another U.S. enemy. The fighting may go on for years; the prize the winner gets is . . . Syria (if it’s the Russians, they’ll wish they were back in Afghanistan).

Degrading ISIS into irrelevance would not degrade anti-American jihadism in Syria into irrelevance. If sharia didn’t ban alcohol, I’d say the old wine would just appear in new bottles. It was, moreover, absurd for President Trump to declare victory just because ISIS has been stripped of 95 percent of the territory it once held. Caliphate aspirations notwithstanding, ISIS’s mistake was the attempt to be an open and notorious sovereign. It was always more effective as a terrorist underground, and it still has tens of thousands of operatives for that purpose.
If we stayed out of the way, America’s enemies would continue killing each other. That’s fine by me. I am not indifferent to collateral human suffering, but it is a staple of sharia-supremacist societies; we can no more prevent it in Syria than in Burkina Faso. And I am not indifferent to the challenge David rightly identifies: terrorists occupying safe havens from which they can plot against the West. But that is a global challenge, and we handle it elsewhere by vigilant intelligence-gathering and quick-strike capabilities. We should hit terrorist sanctuaries wherever we find them, but it is not necessary to have thousands of American troops on the ground everyplace such sanctuaries might take root.

The Kurds are a more complicated problem. We have had a good deal with the Kurds: We protect them from Turkey, they kill jihadists. I could not agree more with David (among others) that it is shameful to abandon them, and it is shame multiplied by cowardice if, as reporting indicates, Trump decided to pull out after a threat by Ankara.
When we look a little deeper, though, we see why Americans will no longer support Washington’s incoherent Middle East adventurism. When we made our arrangements with the Kurds, we knew the backbone of their fighting forces was the PKK, which the U.S. government has designated a terrorist organization. We knew the Kurds had territorial ambitions over which the Turks (and the Iranians, for that matter) are spoiling to go to war. We knew, further, that Turkey is our purported ally in NATO — quite apart from its failure to keep its defense commitments, this Western alliance maintains as a member the regime of Recep Tayyip Erdogan, a sharia-supremacist in the Muslim Brotherhood mold who despises the West. We knew, therefore, that conflict between Turkey and the Kurds was inevitable, that we would eventually have to make an excruciating choice, and that the freight of the NATO alliance would tip the scales in Erdogan’s favor. In fact, in the very conversation in which Erdogan advised Trump to steer U.S. troops clear of Turkey’s imminent anti-Kurd operations, Trump offered Erdogan a Patriot air- and missile-defense system in order to dissuade the Turks from completing a purchase of Russia’s S-400 missile-defense system.
Could we defy Erdogan and keep — or even beef up — the U.S. military presence to protect the Kurds (including protecting the designated terrorists with whom we’ve managed to ally)? Sure we could . . .but by what authority? 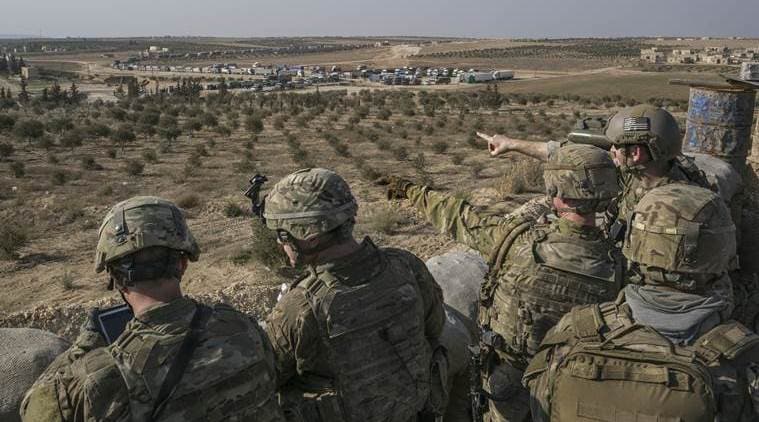 (New York Times)
I felt like a lonely voice around here in April 2017, when I condemned President Trump’s airstrikes on Syria as an unconstitutional act of war and an embarrassing contradiction of Trump’s broadsides against Obama for doing the same thing. I was therefore delighted when, addressing Syria a few months later, David asserted, “The Constitution cannot be discarded when it’s inconvenient.” He elaborated:

It’s past time for a true congressional vote on American engagement in Syria. Any argument that previous use-of-force resolutions applicable to Iraq or al-Qaeda also apply to the current conflict evaporate the instant American forces find themselves holding foreign territory in hostile opposition to the foreign sovereign. There is no credible argument that any current authorization allows American forces to occupy a single square inch of Syria without the consent of its government.

Amen. The Constitution is not a suggestion; it is our law. But this week, it is somehow not even a consideration. I hold no brief for Trump on Syria (as noted above, I believe his lawless aggression risked a wider war no one wants). But I find it remarkable that, as the president was rebuked across Capitol Hill — from Senator Lindsey Graham, who is a true believer in American adventurism, to Democrats, who will exploit any pretext to attack Trump — congressional critics never paused, ever so slightly, over the fact that the troops they want the president to keep in Syria were never authorized by Congress to be in Syria.
Some commentators sensed the problem but tried to finesse it, allowing that it would be good for Congress to have a “debate” about Syria because it would give clarity to the mission. That misses the point. The clarifying debate is a residual benefit we get from the constitutional necessity of obtaining congressional authorization before committing acts of war against other countries that have not threatened us. If the mission is not authorized, its clarity is immaterial.
Which brings me back, finally, to the excellent discussion on The Editors. Here’s David again, defending the mission:

This is one of the clearer missions that I’ve seen. This is not a nation-building mission. This is a mission that is a degrade and destroy a specified enemy, and then hold a geographic line against geopolitical foes who would seek to take that geography and crush our allies. That’s a clear mission

Yes, it’s clear. But so was David’s declaration, a year ago, that there is no lawful authorization in existence that “allows American forces to occupy a single square inch of Syria.” How, then, is it permissible for our forces to be “holding a geographic line” in a foreign country? What does it matter that, rhetorically speaking, Syria, Iran, and Russia are “geopolitical foes” if Congress has never authorized the use of force against them?
We all know the answer to this. Obama did not seek congressional authorization for combat operations in Syria because Congress would have refused. And Congress does not want any president to ask for authorization because members do not want to be accountable — they want to go on cable TV and whine that whoever is president has been heedless, whether for going in or for pulling out.
Want to declare war against ISIS? I’d be up for discussing that. Or, as a matter of honor, an authorization of military force to protect the Kurds for what they’ve done on our behalf? I could be persuaded. Or even a declaration of war against Iran — it wouldn’t require us to invade, but it might be useful as part of a real “maximum pressure” strategy, rather than just making mean faces at them in Syria. I’d be open to all of that; but not to more unprovoked military interventions that don’t have congressional authorization.
There is nothing for America in Syria. We haven’t defeated ISIS by taking its territory, and it wouldn’t matter if we did because sharia-supremacist culture guarantees that a new ISIS will replace the current one. The names change, but the enemy remains the same. And if you want to fight that enemy in an elective war, the Constitution demands that the people give their consent through their representatives in Congress.
ANDREW C. MCCARTHY — Andrew C. McCarthy is a senior fellow at the National Review Institute and a contributing editor of National Review. @andrewcmccarthy
Posted by jtf at 9:05 AM