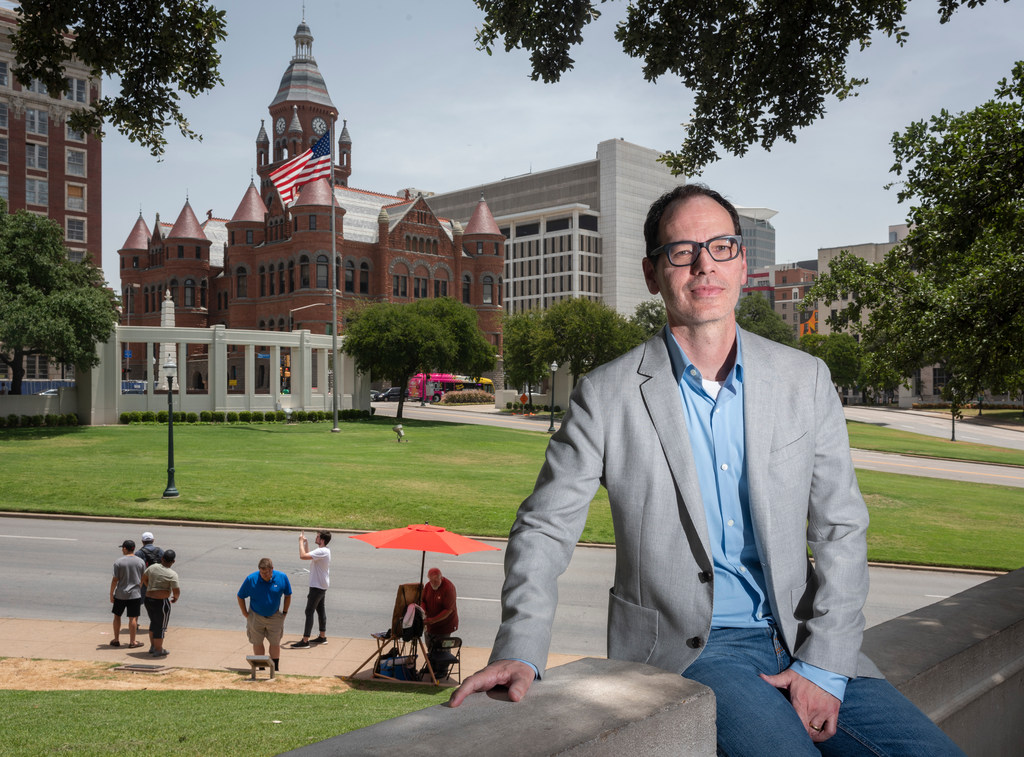 Lou Berney in Dallas
To say that Lou Berney's terrific new novel, November Road, is about the JFK assassination is sort of correct. The story is set in motion by that fateful November day 55 years ago, a day that Berney, born eight months later in Oklahoma, heard about throughout his childhood. But that's just the starting point.
"My mother always told me that I was conceived the night Kennedy was shot, but that is a little sketchy, a little bit off," Berney says over lunch in New York this summer. "But it's plausible. My mom was also a really good storyteller, so I'm never quite sure."
Berney must have picked up the tale-weaving gene. November Road (William Morrow, $26.99, on sale Tuesday, Oct. 9), his fourth novel, tells a propulsive, romantic and danger-laden story centered on two people taking to the open road, running from past mistakes. One, the smooth-talking New Orleans hood Frank Guidry, is a peripheral patsy in the JFK shooting, orchestrated here (and in the minds of many conspiracy theorists) by Bayou mob boss Carlos Marcello. The other, a rebellious Oklahoma housewife named Charlotte Roy, is fleeing a bad marriage from an alcoholic lay-about.
Charlotte packs up her two young daughters and heads West. Frank is going that way, too, and when Charlotte's car breaks down he sees an opportunity to pose as a family man. On their heels is Paul Barone, a killer who takes pride in a job well done.
In Berney's hands, these are the ingredients of a crime novel with a rare combination of emotional weight and gunshot speed. You'll probably foresee Frank falling for Charlotte, but Berney gets inside his characters so gradually and gracefully that November Road easily transcends genre conventions. All that, and he keep things moving at a lively clip.
"I always wanted it to be about the characters, but I also wanted the reader to keep turning the page," he says. "I like books and movies that do both. I don't like just people sitting in a room talking."
That's not a problem with these people. They talk, and kill, and run and make love. They plan and they plot. They make side deals. Charlotte is perhaps the fullest character in the book; Berney's female characters aren't window dressing.
Some of them, in fact, are downright fascinating. Take Seraphine, the Creole criminal mastermind who has Marcello's ear in all matters. (Marcello was a real man; Seraphine is a Berney creation). She's a past love interest for Frank, and the brains behind the sprawling Marcello crime operation. She's the Louisiana spice in Berney's stew.
"I just wanted a character that was a little bit unexpected for the right hand of the king," Berney says. "New Orleans is the one place it might make sense to have a mixed-race woman in that role, and that made her a much more interesting character to write, more fun than a typical guy. I've seen The Godfather a million times and I love Tom Hagen, but I wanted do something different."
November Road is indeed something different. There's no shortage of JFK fiction, but this one belongs up there with the best.
Posted by jtf at 12:52 PM