The Strange Career of White Privilege 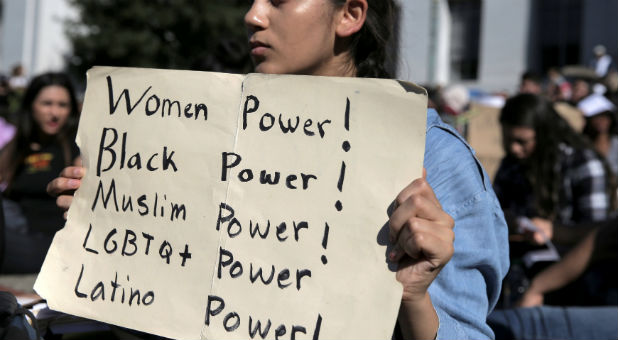 You hear the phrase “white privilege” nonstop in America these days, as the slogan has transcended the campus and entered popular culture.
Historically, the term apparently refers to the original European settlers who came to the United States and later equated the protections of the U.S. Constitution solely with their own majority ethnicity and race — a tribal and chauvinistic mindset that still governs politics and immigration the world over, from China and Japan to most African and South American countries.
Yet the singular transcendent logic of the Constitution and the Declaration of Independence was that all people were created equal. It took over two centuries on the ground to catch up to such lofty idealism.
Yet given that immigration by the early 19th century was already bringing in millions of so-called non-white immigrants, in addition to Native and African Americans, America soon was at least evolving into a multiracial democratic nation united under one shared culture — a radical idea and the first such edgy experiment in human history.
During the civil-rights movement of the 1960s, the nation’s racial tensions were mostly still defined as a binary of a dominant white majority and an often discriminated-against African-American minority.

Years of past prejudice had sparked the idea of affirmative action, or federal reparatory programs accorded to a historically discriminated-against black minority.
However, by the 1980s, owing to new cycles of massive immigration, other minorities likewise explained their own inequality in terms of white-majority oppressors. They lobbied to be included in government reparation programs in job hiring and college admissions.
During the Obama administration, affirmative action was informally recalibrated again well beyond grievances by black and Latino groups against the white majority. Now it was superseded by a far more comprehensive notion of expansive “diversity” — a sort of update of Jesse Jackson’s old notion of a Rainbow Coalition of various aggrieved groups uniting to press their claims for various set-asides to a white majority.
The bizarre academic term “intersectionality” likewise followed, suggesting that gays, feminists, and minorities were united in focusing on supposed white-privilege pathologies. Yet no one quite new how to calibrate all the competing claims of victimhood by race, class, gender, and sexual orientation — as if a white transgendered actor should merit more grievance points than a black impoverished lesbian versus an Egyptian immigrant female CEO or a gay Latino policeman. Such musings are not caricatures, but the logic of the preambles to the usual progressive politicking, when a politico such as Hillary Clinton or Barack Obama did not welcome a crowd as a collective of Americans but ticked off all the various identity-politics groups present, all with claims against the majority.

Unfortunately, “diversity” was never exactly defined — and perhaps could not be. The ad hoc buzzword now referred to all white people on one side who enjoyed supposedly innate skin-color-based privilege, set against almost everyone else — at least sort of.
Those purportedly without white-based privilege included everyone from African Americans and Latinos to recent immigrants from Asia, Africa, and South America. A graduate student could be a descendent of a white Italian immigrant to Argentina, but have come to the U.S. as a “minority” because of his Latinate name and Spanish-speaking ability. The diversity assumption was that the minute a wealthy grandee from Buenos Aires applied for a teaching job in the U.S., he “counted” as a minority, although he could often be more affluent and whiter than those born with “white privilege” in the U.S.
“Diversity,” unlike prior affirmative action for blacks, rested on a number of other assumptions that soon proved even more incoherent.

What exactly did “white privilege” mean in an ethnically diverse society?
Mere appearance? Yet many Arab Americans and Latinos were indistinguishable from fifth-generation Southern European Americans or Armenian Americans. Politics had something to do with skin color, but how and why was inferred rather than defined. If a white-looking second-generation Arab American put on a head scarf and declaimed against U.S. policy, and if she had a name that was clearly not European in origin, then she too was a “minority” and could advance claims against “white privilege.” But should she dress in assimilated fashion and voice support for the state of Israel, then she probably possessed “white privilege” and joined the victimizers rather than the victims.
Intermarriage is increasingly common, if not the near norm. Millions of Americans are one-quarter something, one-half something else, and again one-quarter something still different.
Once race rather than character became preeminent, stranger ideas followed. In the racist past, a non-white or someone of mixed lineage sought to “pass” as white to obtain parity; in our racist present, someone of mixed descent seeks to pass as non-white to obtain advantage.
So, for careerist reasons, some Americans of mixed descent emphasized their supposed non-white lineage. They began ethnicizing, accenting, or hyphenating their names, knowing that their mere appearance might not easily prove that they were non-white. The number of students, friends, and associates I’ve known who, for careerist concerns in their adult years, recalibrated their ethnic identity by nomenclature, fashion, and politics is legion.
Sometimes even slight changes in self-identification have consequences. For the children of intermarried couples, it can be a career-changing decision to evolve from Robert Smith to Robert Garcia Smith (or even better Roberto Garcia Smith) to reflect one’s maternal Latino roots – an effort especially appreciated by universities and employers. As I have written in the past, if George Zimmerman had focused on his Afro-Peruvian mother’s lineage and become rebranded as Jorge Mesa or at least Jorge Mesa Zimmerman, an exasperated New York Times might not have reinvented Zimmerman as a “white Hispanic,” and the entire Trayvon Martin national controversy would have been retold as a fatal fight between an Afro Latino and an African American — and not become a supposed national referendum on white supremacy and racism. Unfortunately for Zimmerman, his name instead conjured up victimizing Germanic racism, not a victimized indigenous person.

In some cases, the more desperate have invented minority pedigrees out of whole cloth, like the false but self-serving and opportunistic claim of Senator Elizabeth Warren (D., Mass.) that she was Native American (on the basis of “high cheekbones” or family mythology), or Professor Ward Churchill’s similar fake Native American get-up that got him hired as a minority at the University of Colorado.
But even if we were all to wear DNA badges and could agree on a magical non-white percentile that qualifies us for minority status, contradictions would still surround the construct of “white privilege.”
Does the white Appalachian coal miner in West Virginia really have an innate leg up on the Punjabi immigrant exec in Silicon Valley on the basis of his appearance? Yet somewhere along the line in a supposed racist America, being a white male in Fayette County, W. Va., did not innately trump being a techie immigrant from Mumbai in Menlo Park. Does multibillionaire Oprah Winfrey have less privilege and opportunity than a white cook in Provo, Utah?
Does the recently arrived undocumented immigrant who has lived his entire life in the Mexican state of Oaxaca become eligible for career and job enhancement because he does not superficially look like the out-of-work lathe worker in southern Ohio? Is the theory that the minute the immigrant crosses the border to the U.S. from his formerly racist society, his children will become eligible for federally mandated advantages on the reasoning that from now on, they will face racism as a non-white in the country to which he fled in order to avoid racism in the country of his birth?

Federal statistics reveal that in terms of average median household income, those who loosely identify as Asian are far wealthier ($80,720 per year) than whites ($61,349). Do they enjoy “Asian privilege” of having on average $20,000 more as a family to spend each year than whites?
More specifically, the top three ethnic income groups in the United States are not categorized as “white”: Indian American ($110,026), Taiwanese American ($90,221), and Filipino American ($88,745). What sort of non-privilege allowed them to vastly outdistance their supposedly racist white-majority hosts — superior education, smarter professional choices, more cohesive family structures, all of which somehow trumped their outward appearance?
In terms of the most indigent counties in the United States, four of the five poorest have overwhelmingly white populations. That might suggest not only that the term “white” is increasingly undefinable, at least in terms of status, class, and privilege, but that “white” includes a vast array of disparate cultures and experiences that make impossible any conclusive idea of white-privilege solidarity.
In many ways, the greatest polarization in the country today is along class, not racial, lines, especially between lower- and middle-class whites and rich, coastal-elite whites — as we were reminded by Hillary Clinton’s recent disdain shown the “deplorables” and “irredeemables.”
One of the strangest elements of the American obsession with superficial appearance is the habit of very well connected and affluent whites faulting poor whites for their “white privilege.” It has become a sort of rite-of-passage virtue-signaling in which rich, white college students at tony universities damn white privilege and the supposedly racist, nativist, xenophobic, and sexist Trump Neanderthals. With this, they establish their spiritually pure fides or, more practically, earn a sort of insurance policy in case the all-seeing eye of the diversity tower turns its focus on them someday.
Donald Trump rode to victory in part on the furor of voters in the Midwest and rural states who were derided for their privilege (though they did not seem to have much) by those who most certainly did enjoy privilege.
Do not underestimate the Trump voter. When they channel-surfed cable news, or heard of the antics that took place on college campuses, or saw street-theater demonstrations on television, they boiled at the idea that they had often worked at minimum wage, saw their jobs outsourced, never discriminated against anyone, and yet were being damned by smug youth who in a few years would draw on their college B.A. cattle brand, their parents’ lobbying, and the good-old-boy network of being rich, white, and from the proper zip code to inherit their rightful place in business, investment, politics, entertainment, the media, or the university. Google all the rich, white, privileged pundits who at one time or another, both in jest and in all seriousness, have called to deport the deplorables and in their stead give amnesty to illegal aliens or import “better” people from abroad.
In sum, the terms “diversity” and “white privilege” have now been stretched to denote so many things, and yet they encompass so many paradoxes and contradictions, that they have become words that mean nothing much at all.
How odd that the current revolutionary mode is to keep these reactionary Byzantine classifications and programs that no longer sync with reality, and to damn as reactionary the truly revolutionary act — which would be to start treating people as unique individuals whose appearance is a secondary consideration.