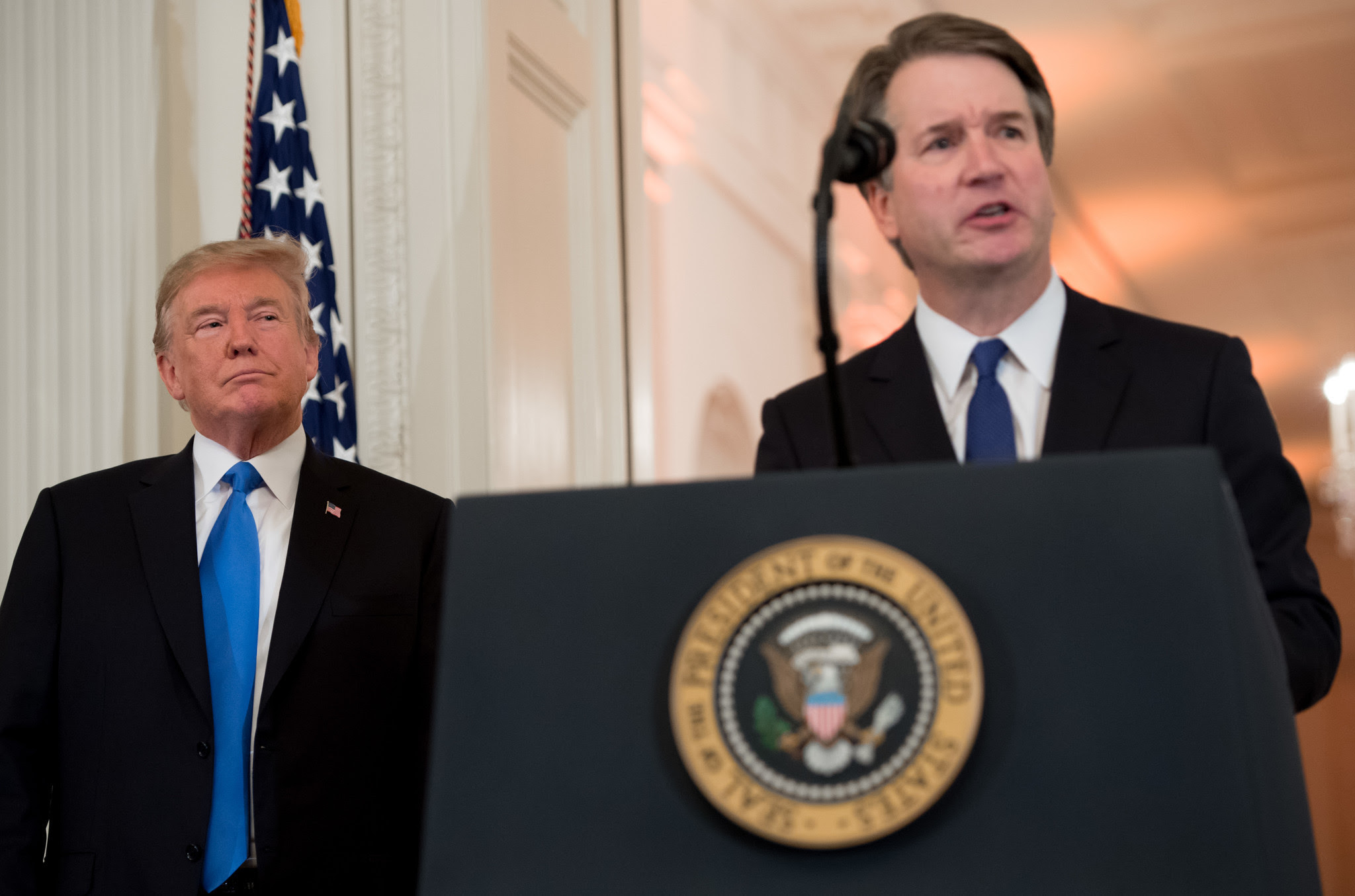 Judge Brett Kavanaugh speaks after being nominated by President Donald Trump to the Supreme Court in the East Room of the White House on July 9, 2018.
(Saul Loeb / AFP/Getty Images)
Liberals know they can't stop Kavanaugh's confirmation, so they'd just as soon not hear any news about it at all. Please cheer us up with stories about Paul Manafort's solitary confinement! But there was one very peculiar reaction to the nomination. The nut wing of the Democratic Party instantly denounced Kavanaugh by claiming that his elevation to the high court would threaten all sorts of "rights." Sen. Cory Booker, D-N.J., tweeted: "Our next justice should be a champion for protecting & advancing rights, not rolling them back -- but Kavanaugh has a long history of demonstrating hostility toward defending the rights of everyday Americans." Sen. Bernie Sanders, I-Vt., tweeted: "If Brett Kavanaugh is confirmed to the Supreme Court it will have a profoundly negative effect on workers' rights, women's rights and voting rights for decades to come. We must do everything we can to stop this nomination." If only these guys could get themselves elected to some sort of legislative body, they could pass laws protecting these rights! Wait, I'm sorry. These are elected United States senators. Of all people, why are they carrying on about "rights"? If senators can't protect these alleged "rights," it can only be because most Americans do not agree that they should be "rights." That's exactly why the left is so hysterical about the Supreme Court. They run to the courts to win their most unpopular policy ideas, gift-wrapped and handed to them as "constitutional rights." What liberals call "rights" are legislative proposals that they can't pass through normal democratic processes -- at least outside of the states they've already flipped with immigration, like California.

Realizing how widely reviled their ideas are, several decades ago the left figured out a procedural scam to give them whatever they wanted without ever having to pass a law. Hey! You can't review a Supreme Court decision! Instead of persuading a majority of their fellow citizens, they'd need to persuade only five justices to invent any rights they pleased. They didn't have to ask twice. Apparently, justices find it much funner to be all-powerful despots than boring technocrats interpreting written law. Soon the court was creating "rights" promoting all the left's favorite causes -- abortion, criminals, busing, pornography, stamping out religion, forcing military academies to admit girls and so on. There was nothing America could do about it. OK, liberals, you cheated and got all your demented policy ideas declared "constitutional rights." But it's very strange having elected legislators act as if they are helpless serfs, with no capacity to protect "rights." It's stranger still for politicians to pretend that these putative "rights" are supported by a majority of Americans. By definition, the majority does not support them. Otherwise, they'd already be protected by law and not by Ruth Bader Ginsburg's latest newsletter. On MSNBC, Sen. Elizabeth Warren, D-Mass., said people storming into the streets and making their voices heard about Kavanaugh is "the remarkable part about a democracy." Actually, that isn't democracy at all. Liberals don't do well at democracy. Why don't politicians run for office promising to ban the death penalty, spring criminals from prison or enshrine late-term abortion? Hmmm ... I wonder why those "I (heart) partial-birth abortion!" T-shirts aren't selling? Unless the Constitution forbids it -- and there are very few things proscribed by the Constitution -- democracy entails persuading a majority of your fellow Americans or state citizens to support something, and then either putting it on the ballot or electing representatives who will write it into law -- perhaps even a constitutional amendment. Otherwise, these "rights" whereof you speak are no more real than the Beastie Boys' assertion of THE RIGHT TO PARTEEEEEEEE! Gay marriage, for example, was foisted on the country not through ballot initiatives, persuasion, public acceptance, lobbying or politicians winning elections by promising to legalize it. No, what happened was, in 2003, the Massachusetts Supreme Court suddenly discovered a right to gay marriage lurking in the state's 223-year-old Constitution -- written by the very religious John Adams. (Surprise!) After that, the people rose up and banned gay marriage in state after state, even in liberal bastions like Oregon and California. The year after the Massachusetts court's remarkable discovery, gay marriage lost in all 11 states where it was on the ballot. Everywhere gay marriage was submitted to a popular vote, it lost. (Only one state's voters briefly seemed to approve of gay marriage -- Arizona, in 2006 -- but that was evidently a problem with the wording of the initiative, because two years later, the voters overwhelmingly approved a constitutional ban on gay marriage.) Inasmuch as allowing people to vote resulted in a resounding "NO!" on gay marriage, liberals ran back to the courts. Still, the public rebelled. The year after the Iowa Supreme Court concocted a right to gay marriage, voters recalled three of the court's seven justices. A handful of blue state legislatures passed gay marriage laws, but even in the Soviet Republic of New York, a gay marriage bill failed in 2009. And then the U.S. Supreme Court decided that was quite enough democracy on the question of gay marriage! It turned out that -- just like the Massachusetts Constitution -- a gay marriage clause had been hiding in our Constitution all along! Conservatives could never dream of victories like this from the judiciary. Even nine Antonin Scalias on the Supreme Court are never going to discover a "constitutional right" to a border wall, mass deportations, a flat tax, publicly funded churches and gun ranges, the "right" to smoke or to consume 24-ounce sugary sodas. These are "constitutional rights" every bit as much as the alleged "constitutional rights" to abortion, pornography, gay marriage, transgender bathrooms, the exclusionary rule and on and on and on. The only rights conservatives ever seek under the Constitution are the ones that are written in black and white, such as the freedom of speech and the right of the people to keep and bear arms. Mostly, we sit trembling, waiting to see what new nonexistent rights the court will impose on us, contravening everything we believe. So when you hear liberals carrying on about all the "rights" threatened by Kavanaugh, remember that by "rights," they mean "policy ideas so unpopular that we can't pass a law creating such rights."
Posted by jtf at 5:28 AM