Deputy Assistant FBI Director Peter Strzok testifies on FBI and Department of Justice actions during the 2016 Presidential election during a House Joint committee hearing on Capitol Hill in Washington, DC, July 12, 2018.(Saul Loeb/AFP/Getty Images)
Although his texts to his paramour indicate he hated Donald Trump as much or possibly more than most of us hate Hitler or Saddam Hussein, Peter Strzok insists his extreme feelings did not affect his work in the Hillary Clinton email matter or the subsequent Russia probe.

He repeated that ad nauseam throughout the circus-like congressional hearing Thursday. But no matter how many protestations the man makes, under oath or not, Occam's razor plus most of our life experiences tell us that Strzok is full of it.

Still, you need concrete evidence and, in a situation like this, that is hard to come by.  Only a real nincompoop would generate it and -- though Strzok was clearly no genius, leaving a huge digital trail of his extra-curricular activities (astounding for a counter-intelligence officer) -- none has surfaced yet. And if the FBI has its way, none will surface until roughly a thousand years after humanity has left Earth for another galaxy.

So we are left to our own devices to determine whether this man is lying. During the hearings, Louie Gohmert applied the old Roman precept -- falsus in uno, falsus in omnibus (you lie about one thing, you lie about everything) -- making the audience gasp by speaking aloud the elephant in the room.  Strzok had obviously lied to his wife about his affair.  Why should he be believed about anything?

Well, good question, except that it would disqualify about two-thirds of American presidents and who knows how many people currently in that very hearing room. (You can hazard your guess in the comments.)

So we're all liars and maybe we are, but I'll tell you what convinced me -- besides an overwhelming amount of circumstantial evidence equivalent to the O.J. trial -- that Strzok was not just your garden variety prevaricator but an out-and-out conniving, evil S. O. B.: his smirk.

The shrinks call that "inappropriate affect" and it sure was.  What the hell was this guy smirking about? Even in the remote possibility (oh, how remote) that his bias had no direct political and investigatory consequence, he had shamed himself, his family, and the FBI and its personnel tremendously, damaging the organization materially for years to come. And yet he was smirking.


In fact, he wasn't just smirking.  He was fighting back as if he were the wounded party. One "useful idiot" on the Democratic side even said he deserved the Purple Heart. 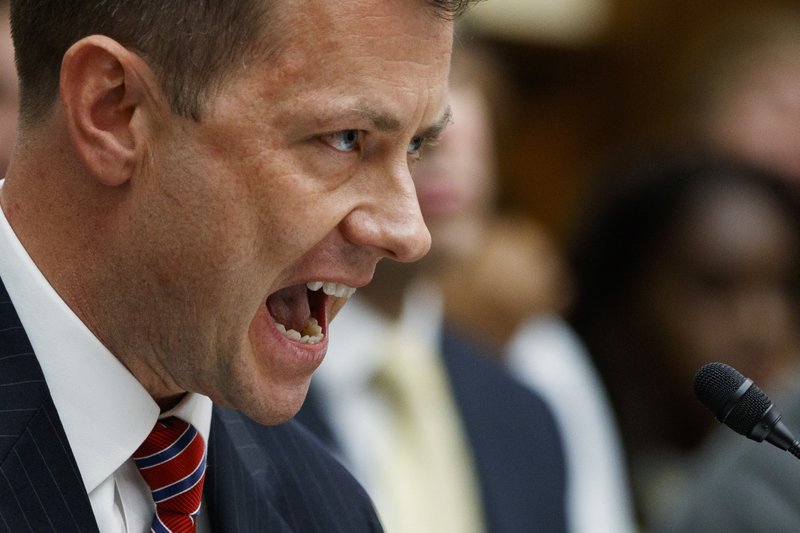 It was a nauseating display of moral turpitude on the part of the Democrats and Strzok.  Who paved the way for that?  Well, I'll tell you: Inspector General Michael Horowitz.

Listening to the hearings today convinced me more than ever that he, like Strzok, is a liar -- only a far subtler and therefore ultimately more dangerous one. In fact, he's so good he probably believes his own lies  Unlike Strzok, he doesn't smirk or get angry.

But he told a whopper in the most clever way.  He gave us hundreds of pages of unequivocal bias on the part of FBI leadership and then said it didn't really matter, that the Hillary decision was correct because there was a similar precedent with Bush's AG Alberto Gonzalez, all of the time ignoring the fate of Navy sailor Kristian Saucier, who went to jail for far less than Gonzalez and, certainly, Clinton ever did.

Horowitz conveniently omitted Saucier from his overview for obvious reasons -- it would have blown it out of the water.  Instead, he has given cover to the likes of Strzok and to the FBI he appears to be criticizing so strongly, but really isn't.

The whole IG report was quite brilliant, if your covert goal was to maintain the status quo.  We saw that at work during Thursday's hearings.

Roger L. Simon - co-founder and CEO Emeritus of PJ Media - is an author and Academy Award-nominated screenwriter.
Posted by jtf at 6:38 AM