BY JOHN CHEVES
jcheves@herald-leader.comhttp://www.kentucky.com/
May 27, 2017 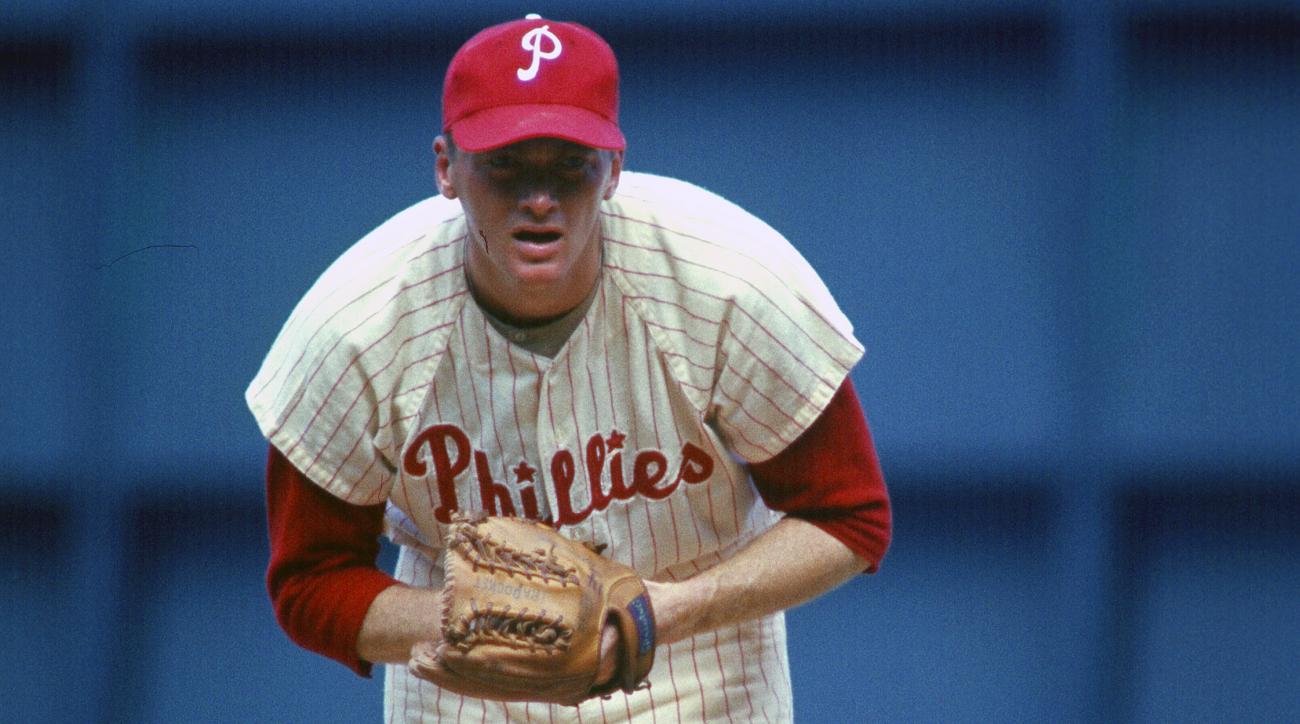 Jim Bunning, a dominating man who pitched a no-hitter in 1958 for the Detroit Tigers and a perfect game in 1964 for the Philadelphia Phillies, and who followed his Major League Baseball career by representing Kentucky in Congress for 24 years, died Friday, his family announced.
Bunning, who was 85, had suffered a stroke last October at his home in Southgate.
Bunning was a staunch conservative, first as a U.S. representative from Northern Kentucky’s 4th Congressional District and later as a two-term U.S. senator. He butted heads with his own Republican Party leaders when he believed they were too quick to compromise with Democrats on issues such as deficit spending.
He also was cantankerous. He snapped “tough s---!” at a senator pleading with him to drop his objection to an unemployment benefits package. He said his 2004 Senate challenger looked like one of Iraqi dictator Saddam Hussein’s sons, and he suggested the man was gay. In a 2009 speech, he predicted that U.S. Supreme Court Justice Ruth Bader Ginsburg would be dead within a year from cancer. Bunning later offered an apology “if my comments offended Justice Ginsburg.” Ginsburg remains alive and on the court.
Facing questions about his behavior, Bunning ended his political career in 2009 when he announced that he would not seek a third Senate term the next year. He blamed Kentucky’s senior U.S. senator, Mitch McConnell, and other GOP leaders for allegedly drying up his fundraising sources and pressuring him to retire.
On his way out, he exacted a measure of revenge by endorsing Rand Paul, another maverick Republican, as his successor. Paul easily defeated Kentucky Secretary of State Trey Grayson, whom McConnell had been grooming for Bunning’s seat.
Always outspoken, Bunning did not shy away from fights.
“I have been booed by 60,000 fans at Yankee Stadium, standing alone at the pitcher’s mound, so I have never really cared if I stood alone here in Congress as long as I stood by my beliefs and my values,” Bunning said in his farewell speech on the Senate floor in 2010.
“I have also thought that being able to throw a curveball never was a bad skill for a politician to have,” added Bunning, who was inducted into the National Baseball Hall of Fame in 1996.
Whatever their past disagreements, McConnell was among those praising Bunning on Saturday.
“Sen. Jim Bunning led a long and storied life,” McConnell said in a prepared statement. “From his days in the major leagues to his years as my colleague in the Senate ... Jim rarely shied away from a new adventure. This Hall of Famer will long be remembered for many things, including a perfect game, a larger-than-life personality, a passion for Kentucky and a loving family. Elaine and I offer our sincere condolences to Mary and the entire Bunning family.”
“Kentucky lost a true gem today,” Republican Gov. Matt Bevin wrote on Twitter. “Jim Bunning, Baseball Hall of Famer-turned public servant, was a champion of conservatism and the embodiment of Kentucky’s tenacious spirit. Bunning’s unique sense of humor and outlook on life often drew attention, but he was never one to back down. He understood that ‘difficult times require difficult decisions,’ a philosophy that guided him well as he served our state and country.”

James Paul David Bunning was born Oct. 23, 1931, in Southgate and received a Roman Catholic education across the Ohio River in Cincinnati at St. Xavier High School and Xavier University, where he majored in economics. In 1952, he married longtime sweetheart Mary Catherine Theis, who survives him.
Jim and Mary Bunning had nine children and dozens of grandchildren and great-grandchildren. Among their notable progeny are son David Bunning, the federal district judge who jailed Rowan County Clerk Kim Davis in 2015 for refusing to issue marriage licenses after the U.S. Supreme Court legalized same-sex marriage, and grandson Patrick Towles, who was a starting quarterback for the University of Kentucky football team.
Mary kept the family together while her husband started in baseball as a $150-a-month rookie, author Frank Dolson wrote in his 1998 biography of Bunning.
“Without a devoted, understanding wife, Jim Bunning couldn’t have survived those seven years bouncing around the minor leagues — from Richmond, Ind., to Davenport, Iowa, to Williamsport, Pa., to Buffalo, N.Y., to Little Rock, Ark., back to Buffalo, and finally to Charleston, W.Va.,” Dolson wrote. “She was home with the kids when he was on the mound trying to establish himself as a pitcher good enough to face big league hitters. He was able to concentrate on what he had to do because he knew that she was doing what she had to do.”
Bunning proved himself worthy of 17 seasons in big league baseball, pitching primarily for the Tigers and Phillies. The Hall of Fame credits him with 224 career wins and 2,855 strikeouts.
“I am most proud of the fact I went through nearly 11 years without missing a start. They wrote my name down, and I went to the post,” Bunning once remarked, according to the Hall of Fame.
When Bunning entered politics in the late 1970s, he surprised some friends who considered him too rough-edged for election campaigns. They were wrong. Bunning went on to serve on the Fort Thomas City Council and in the Kentucky Senate. He won the Republican nomination for governor in 1983, but Democrat Martha Layne Collins defeated him that fall.
In 1986, Bunning got another shot at high office. Gene Snyder, the Republican who had represented politically conservative Northern Kentucky in the U.S. House for 20 years, announced his retirement. Bunning won that seat and held it until 1998, when he moved up to the U.S. Senate seat that was vacated by retiring Democrat Wendell Ford.
Bunning in some ways anticipated the rise of the Tea Party in Republican politics. He was skeptical of government in general, fiercely opposed to the federal debt and critical of the market-influencing powers of the Federal Reserve. He did not hesitate to oppose Republican lawmakers, or even Republican presidents, when he disagreed with them.
In 2006, for instance, Bunning cast one of the Senate’s two votes against President George W. Bush’s choice of Robert Gates as defense secretary. Bunning said he distrusted Gates’ strategy for “directly engaging” nations like Iran and Syria that were known to sponsor terrorism.
“I do not support inviting terrorists to the negotiating table,” Bunning said.
Bunning also drew criticism from some quarters. Time magazine ranked him as “one of America’s five worst senators” in 2006, noting that he had few accomplishments to show for his time in Congress.
“In addition to being hostile to staff members on Capitol Hill and occasionally even other senators, Bunning shows little interest in policy unless it involves baseball, according to congressional experts and colleagues,” Time wrote. “Congressional observers consider Bunning a disappointment ... because his sharp questioning of former Federal Reserve Chairman Alan Greenspan on fiscal matters during hearings over the past couple of years suggest he has the smarts to be an effective senator but doesn’t put in the effort.”
Bunning left the Senate at the end of his second term in early 2011 and made few public appearances afterward, although he continued to spend time with his family. Towles, his grandson who played football for UK, told the Herald-Leader in 2015 that Bunning took him to lunch and advised him to toughen up as an athlete.
“He talked about how I was a super-friendly guy off the field, and he wanted to make sure that wasn’t the case on the field,” Towles said. “You’ve gotta play with that whole mentality, that I’m worried about my guys and my guys are gonna play well, and everything else doesn’t matter. You know, he was spit on in Yankee Stadium. He’s been through the wringer. ... We’re used to that. We Bunnings ... we’re used to criticism. So it doesn’t really mean much to us.”
Funeral arrangements are pending at Dobbling, Muehlenkamp-Erschell Funeral Homes in Northern Kentucky.