On Memorial Day we consider the infinite, unpayable debt we owe to the heroic dead. 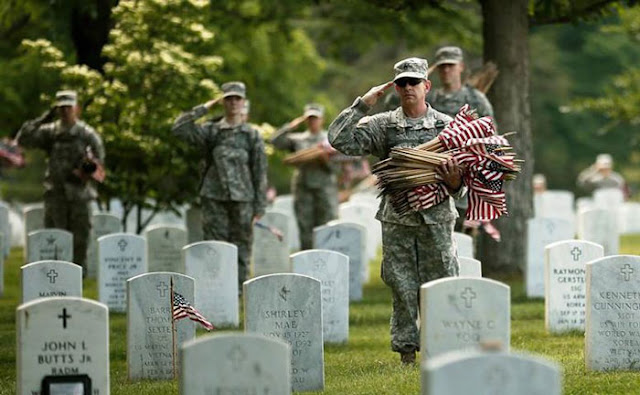 An event called “Flags In” takes place before every Memorial Day weekend in honor of those veterans who have lost their lives.

The first soldier to give his life in service to America was Isaac Davis, a gunsmith shot through the heart at the Battle of Concord on April 19, 1775. The most recent was Kyle Milliken, a Navy senior chief petty officer killed May 5 by Islamist irregulars near Mogadishu, Somalia. Overall, some 1.2 million young Americans have died while under arms, more than one-half of them during the Civil War.

Monday is their day—Memorial Day, when Americans traditionally take a moment to hold in their hearts a thought, a prayer, for those who, as Abraham Lincoln noted, “gave the last full measure of devotion” to the ideals expressed so profoundly in the Declaration of Independence. “We hold these truths to be self-evident, that all men are created equal.” And so it goes—a statement of fundamental purpose, a potential death warrant for those who signed it, and, above all, a unique distillation of centuries of moral evolution, philosophical disputation, and political conflict.

A document worth dying for, in other words.

But original purposes fade over time, obscured by shifting understandings of history and by a failure to grasp that what’s obvious today was not necessarily so clear at the beginning. This seems especially true in America today, where an escalating loss of faith in the animating principles of what Lincoln also termed the “last great hope of earth” is well under way.

The erosion of trust in the values of our forebears is obvious in academia, which exerts a malign influence on American culture generally. Partisan advantage-taking and information-age attention deficits also contribute to the notion that since so many of the Founders were flawed by contemporary standards—most especially because their ideals found room for slavery—then the entire American enterprise was illegitimate, or even evil.

But men are not angels. The adaptation of revolutionary principles often demands the application of evolutionary politics, and so it was for America, which accepted the contradictions of its founding, tried dutifully to work around them, and soon found that to be impossible. The Civil War, sanguinary beyond contemporary comprehension, followed.

At least 620,000 combatants died during the four-year struggle; recent estimates put the total closer to 750,000, or more than 2 percent of the nation’s population at that time. More soldiers died in prison camps alone than America lost during the entire Vietnam War. Perhaps more to the point, some 350,000 Union soldiers died during the conflict, abolitionists in effect if not always in intent. Adjusted for population, that would amount to almost 5 million service deaths today, amounting to a blood sacrifice more than sufficient to redeem whatever moral or intellectual inconsistencies there are to be found in America’s founding documents.

And if that’s not sufficient? Well, then, nothing will be. But for most Americans—and for much of the rest of the world—it is more than enough. From the outset those documents have been far more than just words on parchment—they were a symbol, a beacon, and a standard to be applied to all nations; that most don’t begin to measure up is in itself a powerful argument for American exceptionalism.

All of this is distant in time and experience, of course. Technology and the nature of modern conflict have rendered industrial wars and their endless casualty lists obsolete. The legacy of the old way resides in the nation’s 147 national cemeteries, in the 26 permanent military cemeteries America maintains overseas, and in the uncountable informal war graves around the world—sunken warships and shattered aircraft containing what remains of men for the most part counted as missing in action.

Today, the fallen largely are numbered in single digits, and that is a blessed thing. But it also means that Memorial Day has become an abstraction to many, and that’s problematic. It’s not that the nation is growing disrespectful of its war dead; if anything, the opposite is true. But it does seem as if combat casualties are now viewed solely as tragedies to be mourned individually, with scant recognition of the collective sacrifices involved—which, after all, is what gives death in service to one’s country true meaning.

Sixteen years of unbroken low-intensity warfare doubtless fuels such dislocations, and it certainly contributes to the ennui to be found on campuses and in the popular culture. Sooner or later, this must be addressed. But Memorial Day is not the day for that. Memorial Day is the day to mourn the individual losses, for sure, but also to commemorate the sacrifices in the aggregate—humbly, quietly, respectfully, as a great nation must. Some debts never can be repaid. But honor demands that they be recognized.

Bob McManus is a City Journal contributing editor. Email: bmcmanus@city-journal.org.
Posted by jtf at 6:30 AM