Why the Paris Massacre Will Have Limited Impact 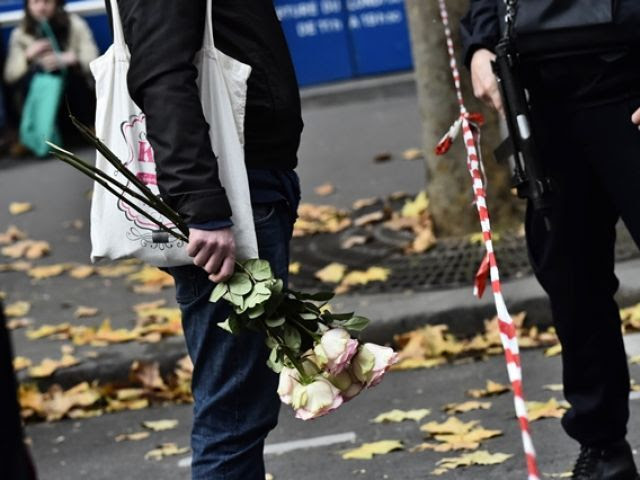 A civilian holds flowers next to a policeman near the Rue de Charonne in Paris on November 14, 2015, following a series of coordinated attacks in and around Paris late Friday which left more than 120 people dead. PHOTO: AF

The murder of some 127 innocents in Paris by a jihadi gang on Friday has again shocked the French and led to another round of solidarity, soul searching, and anger. In the end, however, Islamist violence against Westerners boils down to two questions: How much will this latest atrocity turn public opinion? And how much will it further spur the Establishment to deny reality?

As these questions suggest, the people and the professionals are moving in opposite directions, the former to the right, the latter to the left. In the end, this clash much reduces the impact of such events on policy.

Public opinion moves against Islamists specifically and Islam more generally when the number of deaths are large enough. America’s 3,000 dead on 9/11 stands out as by far the largest body count, but many other countries have had their equivalent attack — the Bali bombings for Australia, the railroad bombing for Spain, the Beslan school massacre for Russia, the transportation bombings for Britain.

Sheer numbers are not the only consideration. Other factors can multiply the impact of an assault, making it almost the political equivalent of mass carnage: (1) the renown of those attacked, such as Theo van Gogh in the Netherlands and the Charlie Hebdo office in France; (2) the professional status of the victim, such as soldiers or police; (3) high-profile circumstances, such as the Boston Marathon bombing.

In addition to the thousands of attacks globally connected to Islamists since 9/11, a huge increase in illegal immigration from the Middle East to Europe recently exacerbated feelings of vulnerability and fear. It’s a one-way street, with not a single soul ever heard to announce, “I used to worry about Islamism but I don’t anymore.”

These cases make more Westerners worried about Islam and related topics from the building of minarets to female infibulation. Overall, a relentless march rightwards is underway. Surveys of European attitudes show 60 to 70 percent of voters expressing these concerns. Populist individuals like Geert Wilders of the Netherlands and parties like the Sweden Democrats are surging in the polls.

But when it comes to the Establishment — politicians, the police, the press, and the professors — the unrelenting violence has a contrary effect. Those charged with interpreting the attacks live in a bubble of public denial (what they say privately is another matter) in which they feel compelled to pretend that Islam has no role in the violence, out of concern that to recognize it would cause even more problems.

These professionals bald-facedly feign belief in a mysterious “violent extremist” virus that seems to afflict only Muslims, prompting them to engage in random acts of barbaric violence. Of the many preposterous statements by politicians, my all-time favorite is what Howard Dean, the former governor of Vermont, said about the Charlie Hebdo jihadis: “They’re about as Muslim as I am.”


This defiance of common sense has survived each atrocity, and I predict that it will also outlast the Paris massacre. Only a truly massive loss of life, perhaps in the hundreds of thousands, would force the professionals to back off their deeply ingrained pattern of denying an Islamic component in the spate of attacks.
That pattern has the very consequential effect of shutting out the fears of ordinary voters, whose views thereby have negligible impact on policy. Worries about sharia, rape gangs, exotic diseases, and bloodbaths are dismissed with charges of “racism” and “Islamophobia,” as though name-calling addresses these real issues.
More surprising yet, the professionals respond to the public’s move to the right by themselves moving to the left, encouraging more immigration from the Middle East, instituting more “hate speech” codes to suppress criticism of Islam, and providing more patronage to Islamists. This pattern affects not just Establishment figures of the Left but more strikingly also of the Right (such as Angela Merkel of Germany); only Eastern European leaders such as Hungary’s Viktor Orban permit themselves to speak honestly about the real problems.
Eventually, to be sure, voters’ views will make themselves heard, but decades later and more weakly than democratically should have been the case.
Placing the murderous rampage in Paris into this context, it will likely move public sentiments substantially in one direction and Establishment policies in quite the opposite way, therefore ultimately having only a limited impact.

— Daniel Pipes is president of the Middle East Forum. Follow him on Twitter @DanielPipes © 2015 by Daniel Pipes. All rights reserved.
Posted by jtf at 8:00 AM