As the CIA goes begging tech titans for help, the hacker collective goes on offense. 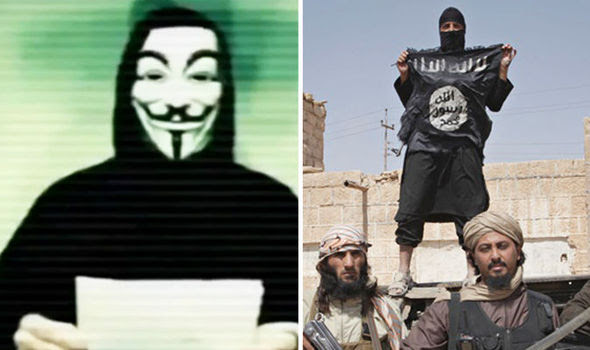 When the hacker group Anonymous announced it was launching a campaign against the Islamic State (“These are not the 72 virgins they were expecting,” as one now immortal online quipster put it), something happened that was, in its way, remarkable: Most everybody took them seriously.

Anonymous has taken credit for eliminating some 3,800 pro-ISIS social-media accounts, and it has suggested that, as in its campaign against the rather less significant Ku Klux Klan, it will gather a great deal of real-world information on Islamic State sympathizers and confederates and make it public. In the case of the Klan, that would mean mainly exposure to social opprobrium; in the case of Islamic State groupies and co-conspirators, that could mean a great deal more.

Anonymous is a famously fractious coalition of individuals and factions with internal rivalries and disagreements — a collective front rather than a united front, as Jamie Condliffe put it in Gizmodo — but it is generally regarded as being reasonably good at what it does. Terrorist groups are critically dependent upon electronic communication for everything from recruitment and motivation to actual operations, and there is some reason to suspect that groups such as Anonymous will prove more adept at disrupting that communication than our conventional intelligence and law-enforcement forces have. The Islamic State isn’t really a state, yet; like al-Qaeda, it is a non-state actor, and it is likely that other non-state actors will be enormously important in countering it.

Compare Anonymous’s cocky declaration of war with the efforts of Senator Dianne Feinstein (D., Calif.) and CIA Director John Brennan, who after the Paris attacks resumed their sad little campaign to convince Silicon Valley technology firms — sometimes bullying, sometimes wheedling — to simply design software and devices in such a way as to give government intelligence and law-enforcement operatives an easy “back door” into secure communication. Senator Feinstein is, incredibly enough, one of the most powerful people in the world, a senator representing the largest and wealthiest state in the most powerful country on earth, with the world’s greatest center of technological innovation in her constituency. Brennan directs the most fearsome public agency in the free world. And these two are forced to go pleading to the nerds at Apple to do their work for them.

The nerds aren’t budging. In a post published via Cyber Dust, a secure messaging app, Mark Cuban insisted: “I view encryption like many view the Second Amendment. Encryption is a fundamental underpinning of the freedom of speech.” Groups such as the Electronic Frontier Foundation frame the question as one of privacy and civil liberties.

But there’s a simple competence question, too: Can Uncle Stupid be trusted with a universal back door? There’s reason to think otherwise.

The recent hack of the Office of Personnel Management — probably the most significant data breach in history — was the result of defective practices and bureaucratic laziness, not the work of super-genius Bond villains abroad. The OPM brass and the rest of the federal ass-covering apparatus is going dark: An hour before a closed House Armed Services Committee oversight hearing on the OPM breach, representatives from the Department of Homeland Security, the OPM, and the Office of Management and Budget all suddenly said that they would refuse to permit their personnel to testify, because the testimony would be — get this — written down.
Closed hearings of the committee are transcribed, and those transcripts are classified; a Capitol Hill source insists that this is no mere formality, that the records are stored and handled in a manner befitting their classified status. The Department of Defense and the Director of National Intelligence’s office both attended and made no objection to the transcription. Funny how the OPM suddenly gets security-conscious when its reputation is on the line.

Maybe somebody could just ask Anonymous who pillaged those OPM servers.

Once, it took a nation-state — and not just any nation-state but a strong and credible one such as Germany — to be the government of France’s most critical threat. The Islamic State counts in its ranks a fair number of hardened war-fighters, but also a lot of dopey suburban kids from second-rate European cities who find themselves transfixed by a great transcendent idea that has, so far as their narrowly proscribed lives are concerned, no striking competitor.

Which is to say, the Islamic State and Anonymous have a great deal in common.

Somewhere back in the shadowy early history of the Internet, somebody with a radical idea in one part of the world started coordinating with a few scattered like-minded men on an online bulletin board, and at that moment we entered into a new kind of politics, even if it wasn’t obvious until 9/11. Anonymous isn’t a friend of the U.S. government, but, as Henry Kissinger said (echoing Charles de Gaulle before him), a nation doesn’t have friends, only interests. In the matter of the Islamic State, the interests of the U.S. government and the interests of Anonymous coincide. No doubt the same is true of organizations darker and more traditional than Anonymous in what they mean by “declaring war.” Like it or not, in the long term, collaboration with and between these groups is going to be an inevitable, and inevitably ugly, necessity.

The balance of power has shifted, and if politicians want to stay in the game as credible players, they are going to have to learn the new rules. Anonymous is going to war — what is the U.S. government doing?

RELATED: ISIS Is a Direct Threat to National Security
Posted by jtf at 11:04 AM

Email ThisBlogThis!Share to TwitterShare to FacebookShare to Pinterest
Labels: ISIS