Barack Obama was elected president in 2008 because he was not George W. Bush. In fact, he was elected because he was the furthest thing possible from Mr. Bush. On some level he knew this, which is why every time he got in trouble he'd say Bush's name. It's all his fault, you have no idea the mess I inherited. As long as Mr. Bush's memory was hovering like Boo Radley in the shadows, Mr. Obama would be OK. 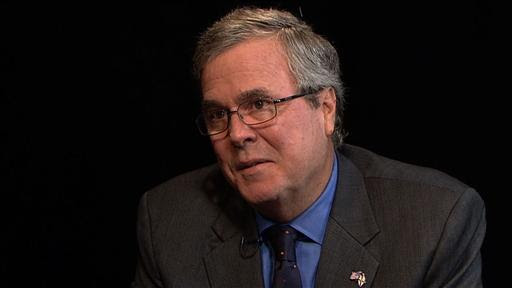 In an excerpt from a longer interview, former Florida Governor Jeb Bush is asked by Peter Robinson of the Hoover Institution whether he plans to run for president in 2016. "Uncommon Knowledge" is produced by the Hoover Institution for WSJ Live.
This week something changed. George W. Bush is back, for the unveiling of his presidential library. His numbers are dramatically up. You know why? Because he's the furthest thing from Barack Obama.
Obama fatigue has opened the way to Bush affection.

In all his recent interviews Mr. Bush has been modest, humorous, proud but unassuming, and essentially philosophical: History will decide. No finger-pointing or scoring points. If he feels rancor or resentment he didn't show it. He didn't attempt to manipulate. His sheer normality seemed like a relief, an echo of an older age.
And all this felt like an antidote to Obama—to the imperious I, to the inability to execute, to the endless interviews and the imperturbable drone, to the sense that he is trying to teach us, like an Ivy League instructor taken aback by the backwardness of his students. And there's the unconscious superiority. One thing Mr. Bush didn't think he was was superior. He thought he was luckily born, quick but not deep, and he famously trusted his gut but also his heart. He always seemed moved and grateful to be in the White House. Someone who met with Mr. Obama during his first year in office, an old hand who'd worked with many presidents, came away worried and confounded. Mr. Obama, he said, was the only one who didn't seem awed by his surroundings, or by the presidency itself.
Mr. Bush could be prickly and irritable and near the end showed arrogance, but he wasn't vain or conceited, and he still isn't. When people said recently that they were surprised he could paint, he laughed: "Some people are surprised I can even read."
Enlarge Image 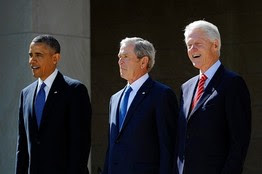 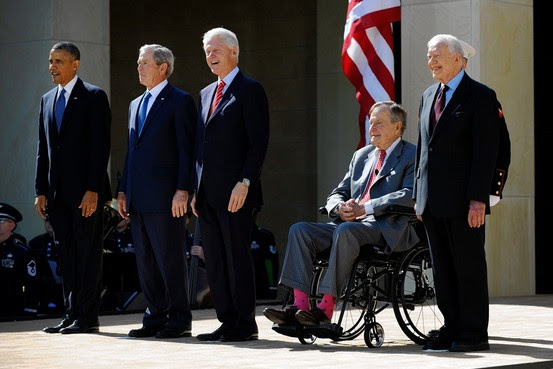 Presidents present and past gathered for the dedication of the George W. Bush Presidential Center in Dallas, April 25.
Coverage of the opening of his presidential library Thursday was wall to wall on cable, and a feeling of affection for him was encouraged, or at least enabled, by the Washington press corps, which doesn't much like Mr. Obama because he's not all that likable, and remembers Mr. Bush with a kind of reluctant fondness because he was.
But to the point. Mr. Obama was elected because he wasn't Bush.
Mr. Bush is popular now because he's not Obama.
The wheel turns, doesn't it?
Here's a hunch: The day of the opening of the Bush library was the day Obama fatigue became apparent as a fact of America's political life.
When Bush left office, his approval rating was down in the 20s to low 30s. Now it's at 47%, which is what Obama's is. That is amazing, and not sufficiently appreciated. Yes, we are a 50-50 nation, but Mr. Bush left office in foreign-policy and economic failure, even cataclysm. Yet he is essentially equal in the polls to the supposedly popular president. Which suggests Republicans in general have some latent, unseen potential of which they're unaware. Right now they're busy being depressed. Maybe they should be thinking, "If Bush could come back . . ." Actually, forget I said that. Every time Republican political professionals start to think that way, with optimism, they get crude and dumb and think if they press certain levers the mice will run in certain directions.

The headline of the Bush Library remarks is that everyone was older and nicer.


Jimmy Carter, in shades, with wispy white hair, was gracious and humorous. Anyone can soften with age, but he seemed to have sweetened. That don't come easy. Good for him.
George H.W. Bush was tender. He feels the tugs and tides of history. "God bless America, and thank you very much." He rose from his wheelchair to acknowledge the crowd. That crowd, and the people watching on TV—the person they loved and honored most was him.

Daily declarations from the Wall Street Journal columnist.
Bill Clinton does this kind of thing so well—being generous to others, especially former opponents. "We are here to celebrate a country we all love," he said. He was funny on how he wanted Mr. Bush to paint him and then saw Mr. Bush's self-portrait in the bath and thought no, I'll keep my suit on. He got a laugh when he called himself the black sheep of the Bush family.
I said everyone was older and nicer. It's occurred to me that the Clintons and both Bushes were president when baby boomer journalists were in their 30s and 40s and eager to rise. Everyone was meaner, both the pols and the press, because they were all young. Now they're in their 60s. When they went through the 9/11 section of the library, the day before the opening, some had tears in their eyes. They understood now what that day was. Young journalists: You're going to become more tolerant with time, and not only because you have more to tolerate in yourself. Because life will batter you and you'll have a surer sense of what's important and has meaning and is good.
President Obama was more formal than the other speakers and less confident than usual, as if he knew he was surrounded by people who have something he doesn't. "No matter how much you think you're ready to assume the office of the president, it's impossible to understand the nature of the job until it's yours." This is a way of seeming to laud others when you're lauding yourself. He veered into current policy disputes, using Mr. Bush's failed comprehensive immigration reform to buttress his own effort. That was manipulative, graceless and typical.
George W. Bush was emotional: "In the end, leaders are defined by the convictions they hold. . . . My deepest conviction . . . is that the United States of America must strive to expand the reach of freedom. I believe that freedom is a gift from God and the hope of every human heart." He then announced that on Saturday he would personally invade Syria.
Ha, kidding. It was standard Bush rhetoric and, in its way, a defiant pushing back against critics of his invasions and attempts to nation-build. Who isn't for more freedom? But that bright, shining impulse, that very American impulse, must be followed by steely-eyed calculation. At the end Mr. Bush wept, and not only because the Bush men are weepers but because he means every word of what he says, and because he loves his country, and was moved. John Boehner weeps too when he speaks about what America means to him. You know why they do that? Because their hearts are engaged. And really, that's not the worst thing.
Back to the point. What was nice was that all of them—the Bush family, the Carters and Clintons—seemed like the old days. "The way we were." They were full of endurance, stamina, effort. Also flaws, frailty, mess. But they weren't . . . creepy.
Anyway, onward to Obama fatigue, and the Democratic Party wrestling with what comes next. It's not only the Republicans in a deep pit.
A version of this article appeared April 26, 2013, on page A13 in the U.S. edition of The Wall Street Journal, with the headline: The Presidential Wheel Turns.
Posted by jtf at 9:20 PM