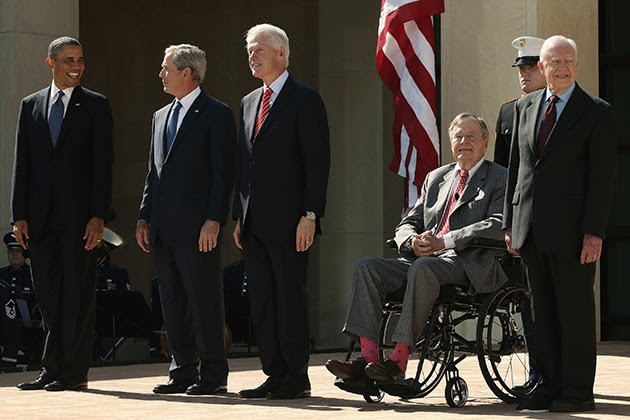 Clare Boothe Luce liked to say that “a great man is one sentence.” Presidents, in particular. The most common “one sentence” for George W. Bush is: “He kept us safe.”

Not quite right. With Bush’s legacy being reassessed as his presidential library opens in Dallas, it’s important to note that he did not just keep us safe. He created the entire anti-terror infrastructure that continues to keep us safe.

That homage was paid, wordlessly, by Barack Obama, who vilified Bush’s anti-terror policies as a candidate, then continued them as president: indefinite detention, rendition, warrantless wiretaps, special forces and drone warfare, and, most notoriously, Guantanamo, which Obama so ostentatiously denounced — until he found it indispensable.

Quite a list. Which is why there was not one successful terror bombing on U.S. soil from 9/11 until last week. The Boston Marathon attack was an obvious security failure, but there is a difference between 3,000 dead and three. And on the other side of the ledger are the innumerable plots broken up since 9/11.

Moreover, Bush’s achievement was not just infrastructure. It was war. The Afghan campaign overthrew the Taliban, decimated al-Qaeda and expelled it from its haven. Yet that success is today derogated with the cheap and lazy catchphrase — “He got us into two wars” — intended to spread to Afghanistan the opprobrium associated with Iraq.

As if Afghanistan was some unilateral Bush adventure foisted on the American people. As if Obama himself did not call it a “war of necessity” and Joe Biden, the most just war since World War II.

The dilemma in Afghanistan was what to do after the brilliant, nine-week victory. There was no good answer. Even with the benefit of seven years’ grinding experience under his predecessor, Obama got it wrong. His Afghan “surge” cost hundreds of American lives without having changed the country’s prospects.
It turned out to be a land too primitive to democratize, too fractured to unify. The final withdrawal will come after Obama’s own six years of futility.

Iraq was, of course, far more problematic. Critics conveniently forget that the invasion had broad support from the public and Congress, including from those who became the highest-ranking foreign-policy figures in the Obama administration — Hillary Clinton, John Kerry, Chuck Hagel and Biden.

And they forget the context — crumbling sanctions that would, in short order, have restored Saddam Hussein to full economic and regional power, well positioning him, post-sanctions, to again threaten his neighbors and restart his WMD program.

Was the war worth it? Inconclusive wars never yield a good answer. Was Korea worth it? It ended with a restoration of the status quo ante. Now 60 years later, we face nuclear threats from the same regime that was not defeated in a war that cost 10 times as many American lives as Iraq.

The Iraq War had three parts. The initial toppling of the regime was a remarkable success — like Afghanistan, rapid and with relatively few U.S. casualties.

The occupation was a disaster, rooted in the fundamental contradiction between means and ends, between the “light footprint” chosen by Gen. George Casey and the grand reformation attempted by Paul Bremer, who tried to change everything down to the coinage.

Finally, the surge, a courageous Bush decision taken against near-universal opposition, that produced the greatest U.S. military turnaround since the Inchon landing. And inflicted the single most significant defeat for al-Qaeda (save Afghanistan) — a humiliating rout at the hands of Iraqi Sunnis fighting side-by-side with the American infidel.

As with Lincoln, it took Bush years of agonizing bloody stalemate before he finally found his general and his strategy. Yet, for all the terrible cost, Bush bequeathed to Obama a strategically won war. Obama had one task: Conclude a status-of-forces agreement and thus secure Iraq as a major regional ally. He failed utterly. Iraq today is more fragile, sectarian and Iranian-influenced than it was when Bush left office — and than it had to be.

Like Bush, Harry Truman left office widely scorned, largely because of the inconclusive war he left behind. In time, however, Korea came to be seen as but one battle in a much larger Cold War that Truman was instrumental in winning. He established the institutional and policy infrastructure (CIA, NATO, the Truman Doctrine, etc.) that made possible ultimate victory almost a half-century later. I suspect history will similarly see Bush as the man who, by trial and error but also with prescience and principle, established the structures that will take us through another long twilight struggle and enable us to prevail.