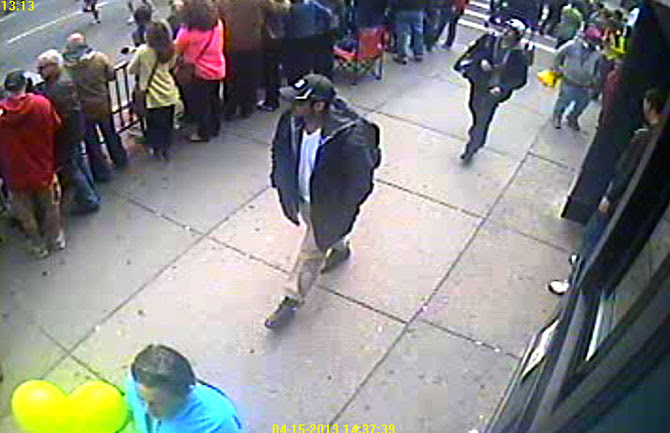 Image of the Tsarnaev brothers captured from a video surveillance feed.

Unlike you, federal government officials are immune from charges of fraud. The executive branch, vested with all of the government’s prosecutorial authority and discretion, is not going to investigate its own operatives for carrying out its own mendacious policies.
That is the story of last week’s Boston Marathon bombing and the frantic efforts of the bombers, the brothers Tsarnaev, to evade capture, shoot it out with police (two of whom they killed), and — we’re now told — detonate more bombs in Times Square. 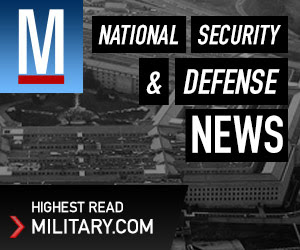 The Times Square non-attack is quite interesting. The specter of it, projected in the immediate wake of the Marathon murders and maimings, is horrific . . . so horrific that the government, in leaking this tidbit from its botched interrogation of Dzhokhar Tsarnaev, knew that news media were certain to lead their broadcasts with it. The press would never wonder why they, and thus we, were being told about it.


But why were they told? Remember, the Times Square bombing not only never happened, it never came close to happening. It was, at most, a passing jihadist fantasy, one that the jihadists in question peremptorily dismissed as implausible. The threat was no more real than those that regularly stream out of Islamic-supremacist mosques and, just as regularly, go studiously unreported.

Mind you, there is nothing inappropriate about government officials’ speaking about matters on the public record — such as the allegations lodged in criminal complaints. But the Times Square non-attack is not mentioned in the complaint filed against Dzhokhar Tsarnaev. In fact, the complaint includes no information from Tsarnaev’s interrogation.

Yet somehow the airwaves are now full of startling revelations from his Miranda-aborted 16-hour post-arrest interview, including not least his confession, and, of course, his assurance, as Allah is his witness, that no one other than he and his Svengali older brother — and certainly no foreign Islamic terrorist organization — had anything to do with their terror spree.

Strange, isn’t it? We are governed by leftists given to finger-wagging about their commitment to due process and the rule of law — they’re not like those bad old warmongering Bushies. Still, here we are in the post-arrest phase of the civilian prosecution the administration was hell-bent on commencing — the phase when due process obliges government officials to remain mum about non-public investigative information that could taint the jury pool and undermine the defendant’s right to a fair trial — and we’re being inundated with stunning confession evidence.

Remember, this is the same crowd that labels the Fort Hood massacre “workplace violence” and won’t honor its victims with Purple Heart medals. To do so, they sniff, might prejudice the objectivity of the trial of a jihadist mass murderer who has publicly announced he’d like to plead guilty. Now, though, in Tsarnaev’s case, government agencies are leaking like sieves.

Because you are being softened up. Steered by its Gitmo Bar veterans and Lawyer Left compass, the Obama administration is executing a massive national-security fraud: the farce that the jihad against America can be judicialized, that civilian-court processes are a better answer to enemy warfare than are combat protocols.

That is why Eric Holder’s Justice Department, together with the FBI, darted into federal court in Boston last Sunday evening to file the complaint against Tsarnaev. Obama was determined to end the public debate over whether the jihadist is a wartime enemy combatant or a mere criminal defendant. As in the case of Sulaiman Abu Ghaith, Osama bin Laden’s son-in-law and al-Qaeda’s alleged “consigliere,” who was whisked into the country and into civilian court before anyone even realized he’d been captured, the administration calculated that a fait accompli is the best way to impose the president’s deeply unpopular preferences.

So now, the next necessary deception in the campaign is to convince you that — all together now — “the system worked.” In reality, the civilian justice system did not work, and that is because it cannot work — not if the objective is the swift acquisition of vital national-defense information.

It could not be more obvious to an objective, rational person that if the aim is intelligence collection, it is far better to interrogate a terrorist without limitations on time and subject matter, without the interference of a defense lawyer, and without empowering the detainee by giving him plea-bargaining leverage to trade for information. The Obama administration, however, is telling you, with a straight face, that the imposition of civilian due process will produce intelligence just as effectively, if not better.

Most people, of course, realize that this is impossible if Miranda warnings must be given. So the administration rolls out canard No. 1: the “public-safety exception.” The public is led to believe that this exception means agents have at least 48 hours of freewheeling interrogation before Miranda kicks in and the terrorist clams up (upon lawyering up). This is brazenly false.

Advertisement
The public-safety exception is an exceedingly limited end-around. It applies only when arrest is accompanied by an immediate threat to public safety. It is not designed to provide the government with an information-gathering advantage against the arrestee. It is narrowly tailored to address the threat that triggers the exception.


There is no 48 hours. The exception ends when the threat ends — which, in the view of most courts, happens as soon as the detainee is rendered defenseless. This usually amounts to something closer to 48 seconds than to 48 hours. Moreover, the exception is not a license to do an extensive intelligence debriefing; the pre-Mirandaquestioning must be tailored to the threat — along the lines of, “Where is the gun?” or “Where are the unexploded bombs?” The public-safety exception does not cover “Where did your brother get terrorist training in Dagestan?”

For intelligence purposes, the public-safety exception to Miranda does not come close to putting arrest in the civilian-justice system on par with enemy-combatant detention. The administration rightly figures the public does not know this, but to anyone with a passing acquaintance with the relevant law, the suggestion that the two paths are comparable is insulting.

Thus canard No. 2: The judge did it. The administration and its accomplices on Capitol Hill have spread the story that the Tsarnaev interrogation was going just swimmingly when, to the shock of everyone, a magistrate judge barged into the hospital room and Mirandized the terrorist, abruptly ending the hugely successful intelligence effort. This, too, is utter nonsense.

As the Justice Department well knows, the filing of the criminal complaint is the action that vested the federal court with jurisdiction to act. The moment the complaint was filed, everyone involved in that decision knew that the rules of criminal procedure mandated a prompt “presentment” hearing before a magistrate judge, who would be required by statute to advise Tsarnaev of his rights to counsel and to stop speaking with government agents. Indeed, it is customary that the Justice Department prosecutors on the case orchestrate these proceedings as soon as they file the complaint. They make sure a defense lawyer is assigned by the court, schedule a hearing time with the magistrate judge, and arrange for a court reporter and, if necessary, an interpreter.

The whole point of the presentment is to get the arrested person out of the government’s clutches and into the Bill of Rights’ carapace. Moreover, when an arrestee is incapacitated, as Tsarnaev was, it is unexceptional to convene the presentment at a hospital — and the magistrate judge and defense lawyer cannot get into the location where the detainee is held under heavy security unless the Justice Department arranges for that to happen.
It was not the magistrate judge who decided Tsarnaev should be Mirandized. It was President Obama and Attorney General Holder.

That being the case, we are now witnessing canard No. 3: There may have been a few bumps in the road, but we learned everything we needed to know in the Tsarnaev interrogation.

Ridiculous. A competent intelligence debriefing involves weeks, if not months, of questioning. That’s because its aim is to develop a complete threat mosaic and arrange our defenses accordingly. By contrast, a post-arrest interrogation by law enforcement is designed to obtain a confession for use at trial. It is not an intelligence-gathering exercise, which is why its purposes can be served by 16 hours of questioning — and often a lot less.

An intelligence debriefing means following the leads uncovered in the questioning of the detainee, then repeatedly coming back to the detainee for clarification and additional insight as new information is discovered. That is not something that can or should be permitted in the case of a criminal defendant presumed innocent; it is for the extraordinary case of a wartime enemy operative who is part of the forces waging jihad against our country.


Obama and the Lawyer Left know this.
Anyone who took a few minutes to think about it would know it. But in their twisted conceit that the threat to our nation results not from the enemy’s ideology but from American aggression, they have convinced themselves that American aggression (what the rest of us call national defense) must be hamstrung by civilian due process — that war can be reduced to crime, even if the enemy declines to play by the rules.

So in the effort to tame you into believing civilian due process has proved wildly successful in the Marathon bombing investigation, just as Obama and Holder promised it would, the government is now strategically leaking interrogation details.

Sure it may look like the investigation was a tragicomedy of errors in which our $100 billion national-security edifice, despite investigating Tamerlan Tsarnaev for a year and a half before the bombing, had to ask the public’s help in identifying a picture of him. But look: We stopped a spectacular bombing at Times Square! And sure, there’s a lot of innuendo about Islam and overseas “extremists,” but after 16 hours of penetrating scrutiny we’ve figured out that this was just wanton “homegrown” violence committed by a couple confused kids — the sort of thing that is bound to happen if we don’t crack down on gun ownership and Islamophobia.

The fraud is on. Will we keep falling for it?

— Andrew C. McCarthy is a senior fellow at the National Review Institute and the executive director of the Philadelphia Freedom Center. He is the author, most recently, of Spring Fever: The Illusion of Islamic Democracy.
Posted by jtf at 5:56 AM