The “walked” guns draw blood south of the border. 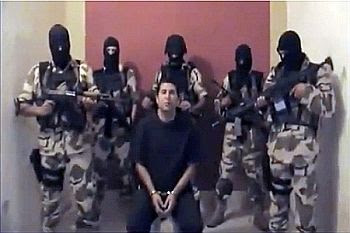 Testimony has revealed that ATF weapons were also traced to the torture and killing of a prominent Mexican attorney, Mario Gonzalez Rodriguez, a sibling to a former attorney general in violence-plagued Chihuahua state.

The American people finally have heard of Brian Terry. He is the best-known victim of Fast and Furious, an Obama-administration conventional-weapons-proliferation program. Between November 2009 and January 2011, Team Obama arranged for licensed firearms dealers to sell guns to straw buyers, who transferred them to known violent criminals in Mexico. Two of these firearms, AK-47s, were found near Rio Rico, Ariz., where suspected smugglers fatally shot Terry, a 40-year-old former Marine, on December 15, 2010.

“I do not fear death,” Terry once wrote. “I do fear the loss of my honor, and would rather die fighting than have it said I was without courage.”

While Brian Terry is the most visible victim of this notorious policy, he is not its sole casualty.

Largely overlooked is this plan’s calamitous impact on Mexico, its people, and U.S.-Mexican relations. Fast and Furious has spilled American blood. But south of the border, it has made blood gush like an oil strike.

“One of the things that’s so offensive about this case is that our federal government knowingly, willfully, purposefully gave the drug cartels nearly 2,000 weapons — mainly AK-47s — and allowed them to walk,” Representative Jason Chaffetz (R., Utah) told NBC News. These arms were supposed to lead federal agents in Phoenix to the Mexican thugs who acquired them. Instead, Fast and Furious guns melted into Mexico without a trace.

These weapons became invisible, but not silent.

Approximately 300 Mexicans have been killed or wounded by Fast and Furious guns, estimates former Mexican attorney general Victor Humberto Benítez Treviño. Now the chairman of the Mexican Chamber of Deputies’ Justice Committee, Benítez told the Los Angeles Times that Fast and Furious “was a bad business that got out of hand.”

On October 21, 2010, Sinaloa drug cartel members kidnapped Mario Gonzalez Rodriguez, brother of Chihuahua State’s then–attorney general, Patricia Gonzalez Rodriguez. She believed his abduction was in retaliation for her prosecution of Sinaloa narco-traffickers. A video promptly emerged showing Mario in handcuffs, surrounded by five armed, masked captors. That November 5, his tortured body was discovered in a shallow grave. Mexican police soon nabbed his suspected kidnappers after a shootout. Serial numbers confirm that two of the 16 weapons seized from eight of these hoodlums were Fast and Furious guns. These also were tied to the kidnappings of two people.
Patricia Gonzalez Rodriguez said, “The basic ineptitude of these officials caused the death of my brother and surely thousands more victims.”

Fast and Furious guns have befouled at least 200 crime scenes. Among them:

Two weapons purchased by Fast and Furious targets were recovered in Sonora on July 1, 2010, and tied to a “Homicide/Willful Kill — Gun,” the U.S. Justice Department revealed last September 9.

Four Fast and Furious guns were found on January 8, 2010, and connected to a “kidnap/ransom.”

Eleven Fast and Furious firearms were discovered in Atoyac de Álvarez after Mexican soldiers saved a kidnap victim on November 14, 2009.

As of December 2010, 241 Fast and Furious guns had been recovered in Mexico and 350 in America.
In one striking case, these weapons did not walk across the border; they ran. “Within a span of 24 hours,” Issa and Grassley learned, “a straw purchaser bought guns at a gun store in Arizona and facilitated their transport to Naco, Mexico with the intent of delivering the guns to the Sinaloa cartel.”
On November 20, 2009, 42 AK-47 assault rifles and a Beowulf .50-caliber rifle were recovered. In just one day, 20 of these guns traveled from Arizona to Sonora, Mexico.

The woman who transported these armaments told investigators that she planned to deliver them directly to the Sinaloa mob. Noting that this was the first Fast and Furious repossession, Issa and Grassley explained: “From the very first recovery of weapons, ATF officials knew that drug trafficking organizations (DTOs) were using these straw purchasers.”

Team Obama’s defenders correctly argue that Bush-administration investigators distributed some 450 guns in Mexico. But there are several key differences: Operation Wide Receiver caused no known deaths. Many of that program’s weapons (unlike most Fast and Furious guns) featured radio tracking devices. Also, Mexico’s government knew about and supported Wide Receiver.

In contrast, Issa and Grassley observed, “ATF and DOJ leadership kept their own personnel in Mexico and Mexican government officials totally in the dark about all aspects of Fast and Furious.”

Mexican attorney general Marisela Morales told the Los Angeles Times that she first learned about Fast and Furious via news accounts. “In no way would we have allowed it,” she said, “because it is an attack on the safety of Mexicans.” In June 2011, a U.S. official informed Morales that, eight months earlier, Mario Gonzalez Rodriguez’s murderers used Fast and Furious guns.

Consequently, another casualty here is America’s friendship with Mexico. Though not mortally wounded, this relationship is in serious condition.

“Fast and Furious has poisoned the well-spring of public opinion in Mexico as it relates to the cooperation and engagement with the United States,” Mexico’s envoy to America, Ambassador Arturo Sarukhan, told Washington, D.C.’s New Democrat Network on May 31. “The thinking that you can let guns walk across the border and maintain operational control of those weapons is really an outstanding lack of understanding of how these criminal organizations are operating on both sides of our common borders.”

This foreign-policy fiasco is the brainchild of an administration whose transparency was supposed to stun the world and whose sagacity promised to smooth international relations after the alleged small-mindedness of the G. W. Bush years.

Diplomatic headaches aside, the real victims of Fast and Furious are those whom this policy helped kill, and the Team Obama–supplied firearms that still haunt the horizon.

“This is the perfect storm of idiocy,” ATF’s Carlos Canino told Representative Issa’s investigators: “Unfortunately, there are hundreds of Brian Terrys probably in Mexico. . . . We [ATF] armed the [Sinaloa] cartel. It is disgusting.”

And, as Issa and Grassley concluded last July 22, 1,048 of those weapons “remain unaccounted for.” Unlike carrier pigeons, these Fast and Furious guns will not fly safely home. Instead, for years to come, they will keep drawing blood in Mexico — and points north.

— New York commentator Deroy Murdock is a Fox News contributor, a nationally syndicated columnist with the Scripps Howard News Service, and a media fellow with the Hoover Institution on War, Revolution, and Peace at Stanford University.
Posted by jtf at 10:46 AM