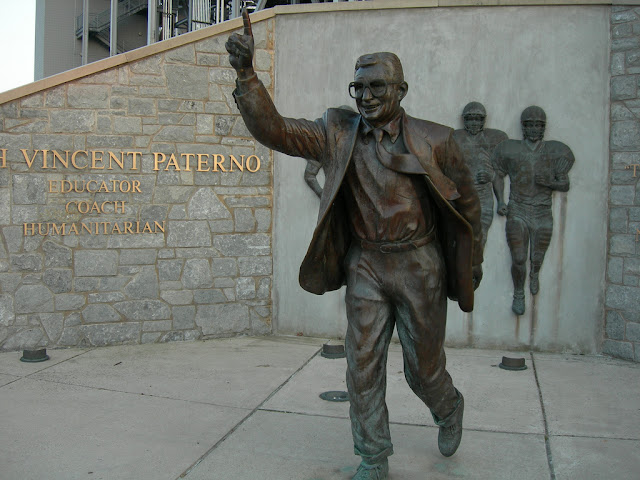 The story of the Joe Paterno and his considerable impact at Penn State continues to evolve, apparently for the worse, even after he is long gone.

It is news that will likely re-shape the image of Paterno about 180 degrees in the wrong direction.

A damning CNN report on Friday detailed a 2001 email exchange among athletic director Tim Curley, vice president Gary Schultz and president Graham Spanier with regard to a 2001 incident in which then-graduate assistant Mike McQueary witnessed Sandusky, PSU's former defensive coordinator, showering with a young boy in the football building.

According to that report, Curley, Spanier and Schultz were prepared to stop Sandusky, convicted earlier this month of 45 counts of molestation, 11 years ago. The trio devised a plan to talk to Sandusky, contact his Second Mile youth charity and notify child welfare authorities.

And then, according to the report, they called a horrifying audible.

Apparently after discussing the plan of action with Joe Paterno.

The report strongly suggests the Sandusky plan was discussed with Paterno, who died in January at the age of 85 after a battle with lung cancer.

According to CNN, Curley, in an email, admits to "talking it over with Joe" and being "uncomfortable with what we agreed were the next steps."

The plan was never acted on. PSU officials never reported the 2001 incident to police or welfare authorities.

The CNN report sheds a harsh light on Paterno, who during his testimony to a grand jury in 2011, claimed that when informed of the 2001 incident by McQueary, he forwarded the information to Curley and was no longer involved.

The CNN report opens the door for this question to be asked: Did Paterno influence Curley, Spanier and Schultz not to act on their initial Sandusky plan?

Saturday, the Paterno family released a statement through its attorney maintaining Paterno did not "Interfere with or attempt to compromise any investigation" involving Sandusky.

The CNN report suggests otherwise. It suggests Paterno, Division I's all-time wins leader (409) was in the loop back in 2001.

And this Paterno doesn't jibe with the Paterno many Penn State fans thought they knew. The coaching icon. The father figure. The man behind "The Grand Experiment", the idea that academics and athletics go together for a student-athlete.

It is a report that further damages Paterno's legacy. When the university fired him last November -- by phone -- soon after the Sandusky scandal broke, Paterno admitted he should have done more.

And it's obvious many Penn Staters, past and present, and many former PSU players and many PSU fans forgave him.

Many thought he deserved better than the quick hook the university handed him./p
Thousands mourned him at his viewings in late January.

And there was the Joe Paterno memorial in January at Bryce Jordan Center, attended by a sold-out crowd of 12,000. During it, former players eulogized him, remembered him and praised him. And it was there that Nike founder Phil Knight, a longtime Paterno friend, uttered these words in defense of the former PSU coach:

"If there is a villain in this tragedy, it lies in that investigation and not in Joe Paterno's response.''

I reached out to a half-dozen prominent former PSU football players for reaction to the CNN report Saturday afternoon and evening. Only one was willing to talk, with the provision that we were off the record.

This latest bombshell brings with it more questions, some of which will never be answered with Paterno gone.

It also brings with it more cries for the NCAA to consider Penn State for the death penalty, which prohibits a school from competing in a sport for a year. It's only been handed down once to a football program once, to SMU in 1987.

"The CNN report re: handling of Sandusky by PSU from Spanier to Paterno, makes me wonder what qualifies program for death penalty these days,'' said ESPN college commentator Desmond Howard, the Heisman winner from Michigan, on his Twitter account Saturday.

Joe Posnanski, one of the country's top sportswriters, is in the process of finishing a book on Paterno. He moved to State College prior to the 2011 season to do much of his reporting.

"Will not comment re: Paterno because I don't think it's my place now,'' Posnanski tweeted Saturday.
"But I will say that all of this and more is in the book.''

Additional media reaction to Paterno and the CNN report was swift Saturday. One national columnist, Gregg Doyel of CBSsports.com, called for Paterno's statue outside Beaver Stadium to be torn down.

Another, Yahoo sports columnist Dan Wetzel, wrote, "the beloved saint of the Nittany Lions, is left looking nothing like the man everyone believed he was.''

And what about the future of Penn State football?

New coach Bill O'Brien and his staff continue to work long hours making over the Penn State team in their image. O'Brien, the former New England offensive coordinator, is installing a more diverse offense, more aggressive defensive schemes and, most important, he's trying to upgrade the Lions' talent base with a more national recruiting approach.

And seemingly every month, or every week, there is more news coming out about Sandusky or, now, Paterno. Bad news. That can make the process of selling Penn State football challenging at the very least.

But nowhere near as difficult as believing in the former Penn State leader.

Joe Paterno coached at Penn State for more than 60 years, 46 of them as head coach.

He was elected into the College Football Hall of Fame.

The university named a library after him.

He was an icon, a title that was six decades in the making.

Then the Sandusky news broke in November.

And now comes the CNN report involving him, Curley, Spanier, Schultz and the aborted Jerry Sandusky plan. Was there a coverup?

And you wonder, with regard to Paterno, if everything goes out the window after the last two days.

nice posting.. thanks for sharing.