Andy Griffith, A Champion of Bluegrass 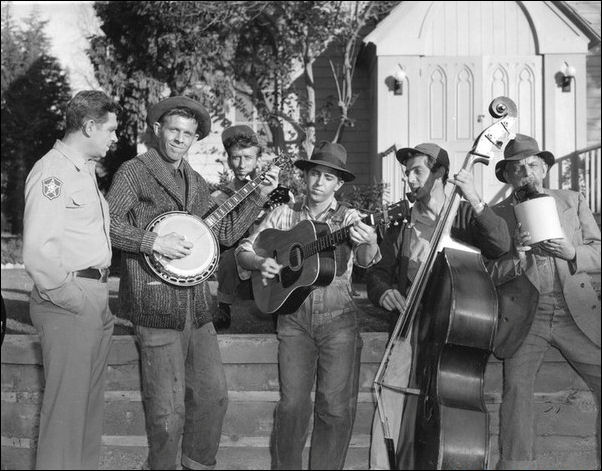 Andy Griffith’s background as a singer and guitarist were obvious during the long run of “The Andy Griffith Show,” in which he would periodically pull out a guitar to strum and sing a bit. He also welcomed the opportunity to incorporate other bona-fide musicians onto the set when producers invited the Dillards bluegrass group from the Ozark Mountains to portray a family band called the Darlings.

The Dillards -- fronted by brothers Douglas and Rodney Dillard -- had moved to Los Angeles from Missouri in the early '60s looking to broaden their audience. Rodney Dillard recently told The Times that they chose Los Angeles over Nashville because “we felt people were more open-minded, creative-wise. Nashville was formula cut-and-dried at the time.”

After signing with Elektra Records in 1962, they were hired to perform on “The Andy Griffith Show,” which was filmed in Hollywood.

“Andy Griffith became more than an icon,” Dillard said in a statement issued Tuesday. “He represented American family values and has given comfort and hope in these uncertain times. He gave The Dillards [The Darlings] an opportunity to be part of this. Andy was kind, generous and patient with an inexperienced group of pickers from the Ozark Mountains.”

Here’s a video of Griffith and actor Denver Pyle, who played the patriarch of the Darling clan, singing the gospel song “Leaning on the Everlasting Arms”:

“Because of 'The Andy Griffith Show' and the exposure that music brought, it gave an introduction to bluegrass to a lot of people who never, ever would have gotten to it," Rodney said. "They found others like Flatt & Scruggs and the Osborne Brothers, and found this whole world of the classic form of traditional music.”

Actress Maggie Peterson, who played Charlene Darling from 1963 to 1968, said in a statement issued Tuesday: “The Darling family was treated with such respect on the show. These could have been ridiculous characters without Andy’s respectful reaction to us. Everyone will truly miss him. Thank God we have those beautiful episodes to keep us company.”

Others guested on the show as well, including Roland and Clarence White as “The Country Boys,” with a performance of “Whoa Mule” for which Andy joined in when an Alan Lomax-like character showed up to record some backwoods music:


It was also Griffith’s persona as an unflappable source of common sense and gentle wisdom that prompted country singer Brad Paisley to seek him out when he made the music video for his 2008 single “Waitin’ on a Woman,” Griffith taking the role of Paisley’s mentor in the ways of male-female relationships. The song starts whimsically, examining a man’s frustration with his partner’s tardiness, then segues into a sweetly philosophical take on the subject.

Here’s the video for “Waitin’ on a Woman”:

“Few people in this world will ever have more influence on our lives than Andy Griffith,” Paisley said in a statement issued Tuesday. “An actor who never looked like he was acting, a moral compass who saved as many souls as most preachers, and an entertainer who put smiles on more faces than almost anyone; this was as successful a life as is pretty much possible. Andy Griffith made the world a better place, and I was so proud to call him a friend.”