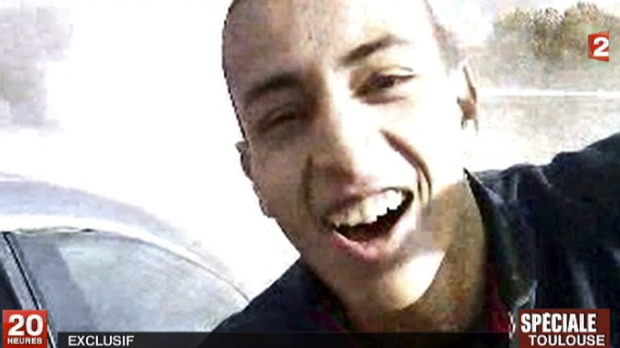 This undated and unlocated frame grab provided Wednesday, March 21, 2012, by French TV station France 2 shows the suspect in the killing of 3 paratroopers, 3 children and a rabbi in recent days, Mohamed Merah. French police were preparing to storm an apartment building in Toulouse on Wednesday to arrest a holed-up gunman who is suspected in seven killings and claiming allegiance to al-Qaeda, a top police official said.

French police were warned nearly two years ago that Mohammed Merah, the Islamic radical suspected of murdering Jewish children and French soldiers, was recruiting boys for jihad – or holy war – according to Le Télégramme, a French newspaper.

The mother of a 15-year-old boy lured by Mr. Merah to his apartment where he was shown videos of beheadings, given a Koran and al-Qaeda indoctrination materials said she twice filed complaints with the police.

In an interview published by Le Télégramme, the woman identified only by a pseudonym Aisha, who said she lived in the same neighbourhood as Mr. Merah, blamed the police for failing to take her warnings seriously.

“I am appalled. It took all these people [to be] killed for Mohammed Merah [to be] finally stopped,” she said. “The police knew all about the danger of this individual and his radicalism.”

She said her son was forced to watch “unspeakable” videos of women being executed with shots to the head as well as beheadings.

“In his apartment, there was a huge Koran in his living room and several large swords hanging on the wall,” Aisha said.

She said her son telephoned her and she went to Mr. Merah’s apartment to bring him home at midnight.

Mr. Merah was apparently aware that she filed a complaint. He threatened the family and tried to seize the son. His sister intervened and, according to Aisha, was beaten by Mr. Merah. He warned that the family would pay, like “all French atheists.”

“He threatened us with death. He made the sign of the slaughter,” she said. Her lawyer, who appeared at the interview, produced a copy of the police complaint dated June 25, 2010, to substantiate her claims.

The mother filed a complaint with the police, which according to her, caused Mr. Merah to become upset. “He came to the front of our home, threatened me and hit me. He said that I was an atheist and that I must pay like all the rest of France’s citizens,” she said.