How does the new material fit in with the classics? 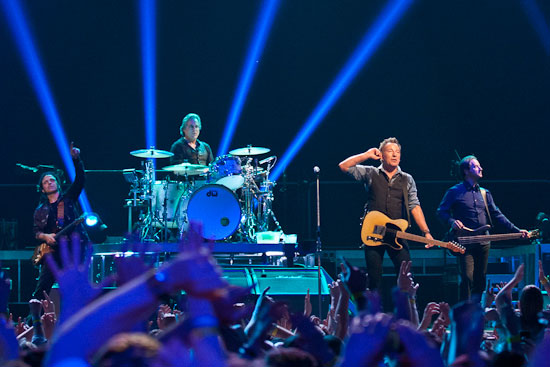 
Let me start off by saying I’ve never seen Bruce Springsteen give a bad show in the close to 40 times that I have seen him over a 30-year period. There are merely gradations from good to great to breathtaking to transcendent. I should also admit that I consider being inside an arena at a Springsteen show, surrounded by my Springsteen community, to be one of my happiest places on earth.

This would mean I’m hardly objective when it comes to reviewing a Springsteen show and I judge it on a different level than the casual fan. Even with that caveat, last night’s show at the Greensboro (N.C.) Coliseum displayed a level of polish that was astonishing considering it was only the official second night of the “Wrecking Ball” tour (he played warm-up gigs at the Apollo Theater and SXSW). While never reaching transcendence (and, really, how realistic an expectation is that every time?), the show was far better than the second night should be, especially given the number of Springsteen newbies on stage.

Longtime fans are now familiar with the drill: the first leg of a Springsteen tour immediately following the release of a new album is intensely focused on the new material and this outing is no exception: he played nine of the 11 songs from “Wrecking Ball.”

But, of course, the mandate is as it has been for 40 years. As he told a worshipful Greensboro crowd, even though there are some new members, along with the remaining old members, “The E Street Band’s mission remains the same. To take the glorious power of music and shoot it straight into your heart tonight.” By the end, Springsteen vowed that if he and the band did their job right, they’d leave us with “your feet hurting, your hands hurting, your voice hurting and your sexual organs stimulated.” He may have cleaned up that last part since his daughter, who goes to college in the area, was in the audience.

Much of the new material fits beautifully into the Springsteen musical spectrum to create magical juxtapositions in concert: “Jack of All Trades,” the searing, sorrowful tale from “Wrecking Ball” of a man who is desperately trying to find a way to feed his family for one more day segued into a ferocious, full-throttled version of “Seeds,” a song that first appeared on “Live 1975-1985” about a man also trying to feed his family as they are reduced to sleeping in their car. In “Jack,” he cries “If I had me a gun, I’d find the bastards and shoot them on sight” (a line that got a rousing audience response); in “Seeds, he declares “Well, I swear if I could spare the spit/I’d lay one on your shiny chrome.” Separated by more than 25 years, the protagonists are kindred spirits, victims of the corporate jackals that keep their boots on the necks of the downtrodden.

Similarly, “The Rising” into “Wrecking Ball’s” “We Are Alive,” perhaps the most life-affirming song ever told from a dead man’s perspective, provided an uplifting, spiritual wallop on top of a show that already had plenty such moments.

Much of the audience seemed very familiar with the new material, even though “Wrecking Ball,” which sits at No. 1 on the Billboard charts (read our review here), has been out for only two weeks. But Springsteen wasn’t taking any chances. He sold the new material hard, bringing verve, brio, sheer craftsmanship, and determination to each of the new tunes, as if he was willing us to like them. But that has always been one of his most admirable traits: he plays every show as if it could be his last and, despite his iconic status, he has to earn our respect and love all over again each time.

At 62, Springsteen is in better shape than ever. He’s a chiseled bundle of energy who still effortlessly drops to his knees and then pops back up into a backbend during the intro to “Tenth Avenue Freeze-Out” (and this is after playing for close to three hours) But the last few years have showed him, and all of us, how fragile we all are and that fragility gave the concert an added aura of poignancy. None of us are guaranteed that next show.

The spirits of departed E Street saxophonist Clarence Clemons and keyboardist Danny Federici felt as if they were never far away, especially when Springsteen decreed, “if you’re here, and we’re here, they’re here.” It was jarring to see Soozie Tyrell now positioned stage left, down from Nils Logfren, in Clemons’ old spot. But when Clemons’ nephew, Jake Clemons, stepped up for the first time— to play the solo in “Badlands,” the third song in the set—the crowd roared as if they felt the direct bloodline between the two and were rooting for the excellent Clemons, but also saluting his uncle. It was also a gut-punching, heartbreaking reminder that The Big Man is really gone.

Jake Clemons is part of a newly extended E Street Family. Now, along with the E Street Band, there’s the E Street Horns and the E Street Singers; some of whom have played on previous tours and many of whom have not. They all add up to 17 musicians/singers on stage and, perhaps, represent the next era of E Street. While the usual, fun interplay between Springsteen and sidekick Steve Van Zandt was scant, and Lofgren only got in one incandescent, jaw-dropping solo (on “Because The Night”), it felt right. Heaven knows, it does take a whole horn section, complete with tuba, to replace the Big Man, and the expanded vocals give Springsteen flexibility to try new things, such as a flawless group a capella version of The Temptations’ “The Way You Do The Things You Do” into “634-5789” that ended with Springsteen crowd surfing in the pit.

Speaking of vocals, much of “Wrecking Ball” is challenging stuff that requires Springsteen to sing full out, as if he’s conjuring up old field hollers, and he proved well worthy of the task. Although some of the instruments sounded muddied in Greensboro (or maybe there's just too much going on with that many musicians on stage), his vocals were way up in the mix above the fray and his voice was amazingly strong and resonant-- especially given that it was only the second night of the tour.

Relying so heavily on “Wrecking Ball” material did provide some pacing challenges. There were times that the arc of the show felt like a screamer, such as “Adam Raised A Cain” was needed to keep up the energy, but instead, Springsteen would delve into another tune from the new album. Some of that will be fixed as fans become more familiar with the nascent material and some of it will also be solved as Springsteen travels further down the “Wrecking Ball” tour road.

As hardcore followers know, when/if Springsteen swings back around after the European summer dates, the show and set list will loosen up considerably. For example, on Monday night only two songs differed from the night before in Atlanta. After he’s done promoting “Wrecking Ball” so arduously, the number of “WB” songs will drop down to around four or so and the number of songs that vary from night to night will increase dramatically. Even though the tour will still be under the “Wrecking Ball” moniker, the tone will be completely different. Part of the fun of being an ardent fan is seeing how the show evolves over the life of a tour.

Springsteen closed the show with a four-pack of “Born To Run,” “Dancing in the Dark,” “Rosalita” and “Tenth Avenue Freeze Out.” If there’s any more joyous way to end an evening than with that quartet of overabundant happiness, mere mortals have yet to discover it. As usual, Springsteen’s last words were “We’ll be seeing you.” And in these troubled times, they feel like so much more than a promise. For true believers like me, they feel like salvation.