The never-ending obsession with Kay Summersby affects even Jean Edward Smith's new biography of Eisenhower.
By Mark Tooley on 3.20.12 @ 6:07AM
The American Spectator
http://spectator.org
Jean Edward Smith's new Eisenhower In War and Peace has been widely praised, including by columnist George Will. Likely this latest biography about Ike as general and President has many virtues. But its inordinate attention to Ike's war-time chauffeur and fulsome portrayal of her as mistress based on almost no credibly presented evidence undermines the book's credibility. 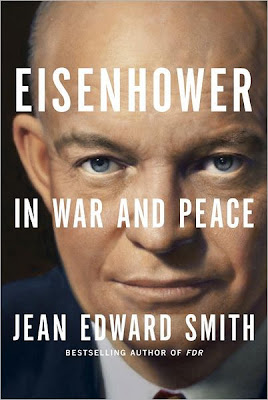 Kay Summersby was an attractive British army officer who chauffeured Eisenhower for much of three years through London, in North Africa, and later in Europe, while also serving as a secretary. Her looks and constant proximity to Ike during the war raised some eyebrows but not sufficiently to inhibit his later political successes. He had virtually no contact with her after he returned to America at war's end. Her initial memoir about her work for Ike never claimed romance. But her ostensible second memoir published posthumously claimed physical intimacies with her war-time boss.

The index of Eisenhower in War and Peace allots more page mentions to Summersby than to five-star General Omar Bradley, Ike's close subordinate and a friend across 50 years starting at West Point. She also eclipses British Field Marshal Bernard Montgomery, Ike's most important military ally and frequent nemesis. She's mentioned more often than Richard Nixon, Ike's vice president and political mentee. Likewise, Summersby gets more mentions than Eisenhower's only child and son, who graduated from West Point in time to serve in Europe, spending time with his commander and father, and who also worked for his father after the President's retirement to Gettysburg. Secretary of State John Foster Dulles, arguably Ike's most influential cabinet member across seven years and whom he admired tremendously, similarly is overshadowed by Summersby, at least in page mentions.

General George Patton, Ike's flashiest subordinate, just barely gets more page mentions than Summersby. So does General Douglas MacArthur, for whom Ike worked before World War II. The few others who merit more attention than the chauffeur are Ike's wife of over 50 years who served as First Lady, President Franklin Roosevelt and General George Marshall, who together elevated Ike to greatness, and British Prime Minister Winston Churchill, Ike's chief partner in the liberation of North Africa and Europe. Seemingly only these global figures are more important than Summersby in the life of Eisenhower.

No doubt Eisenhower appreciated Summersby's company across three tumultuous years, during which Ike chain-smoked and tersely plotted the destruction of the Third Reich. Possibly a tense and lonely Ike betrayed his wife and succumbed to her charms. But other biographers like Stephen Ambrose and Carlo D'Este have doubted it. So too have surviving members of Eisenhower's closest staff, who emphasize that he was almost never alone throughout the war, constantly surrounded by staff, fellow generals, and supplicants for his attention. Ike's war-time orderly recalled physically putting his commander to bed every night and getting him out of bed every morning, with no sign of Summersby. Eisenhower's son also rejected the claims of adultery, believing his father would never have embarrassed his only son by asking him to escort Summersby during his U.S. visit if she had been a mistress.

Smith liberally quotes from Summersby's purported 1975 memoir, Past Forgetting: My Love Affair with Dwight D. Eisenhower, without fully mentioning it was ghost-authored by a professional novelist and published after Summersby's death. The book admits the chauffeur was rarely alone with her boss but recalls quickly stolen intimacies in an affair that was never successfully consummated. Smith also quotes from Merle Miller'sPlain Speaking, a popular but ultimately discredited 1973 remembrance of interviewing former President Harry Truman more than a decade earlier for a television series that never aired. Miller claimed Truman told him of personally destroying or returning correspondence in which Ike supposedly told General Marshall he wanted to divorce his wife and marry Summersby, to which Marshall responded by threatening to kibosh Ike's career. The tapes of these interviews survive but there's no such conversation. Miller safely published his book right after Truman's death. But when he earlier sought permission from Truman to publish excerpts, Truman alleged "misstatements" and threatened litigation. Smith mentions no reasons for skepticism about Miller, himself a novelist.

In a more tortured fashion, Smith relates that an elderly professor told him of a since deceased colleague who, as a young naval intelligence officer, had supposedly perused Marshall's rebuke to Ike. Would the famously discrete and disciplined Marshall have put such a rebuke on paper and had it transmitted through channels for censorship review by a low ranking serviceman? And would Marshall have left such incendiary correspondence in Pentagon files, as Miller claimed, knowing they could be exploited by countless political hacks? No trace of such letters has ever surfaced in the Truman, Eisenhower, or Marshall archives. Smith also bases his assumption of an affair by Ike and Summersby with his longtime-acquaintance with General Lucius Clay, about whom he also wrote a biography. But he provides no supporting quotes from Clay, who died over 30 years ago, instead only noting that Clay "blushed" when asked about Summersby and changed the topic.

Smith even oddly cites Fawn Brodie's ridiculous 1974 psycho-babble "intimate biography" of Thomas Jefferson, which conjectured an affair between Jefferson and his slave Sally Hemings. Smith asserts Brodie's fictional speculations carry the "ring of reality," similar to the lore about Ike and Summersby. Somberly, Smith recounts Ike's "cold-blooded and ruthless" good-bye letter to Summersby at war's end. By comparison, he declares that FDR would have been "incapable" of writing such a thoughtless farewell. Although Smith has written a lengthy biography about Roosevelt, he seems to forget that the famously ruthless FDR, whose wife once wondered if he truly cared about anyone, coolly neglected his own secretary and sometimes alleged mistress of over 20 years after her stroke. She was devastated by his neglect. (In fairness to FDR, he was an ailing paraplegic leading a great war against two enemy empires with limited personal time and emotional energy.) Ike's letter to Summersby is only "cold" if she was in fact a mistress. If she was instead a trusted and close subordinate, the letter is in fact rather gracious, especially by Ike's detached standards.

Eisenhower in War and Peace mostly lauds Ike's leadership and accomplishments. As to the details of Ike's relations with Summersby, Eisenhower's son once likened it to the platonic, teasing and fatherly association between Ed Asner's Lou Grant and Mary Tyler Moore's character in Moore's popular 1970s sitcom. This comparison probably better and more succinctly captures the essence than Smith's nearly one column of index page mentions that mostly cite idle speculations.

- Mark Tooley is president of the Institute on Religion and Democracy in Washington, D.C. and author of Methodism and Politics in the Twentieth Century.
Posted by jtf at 9:51 AM