First the Ahmadi, Then Everybody Else 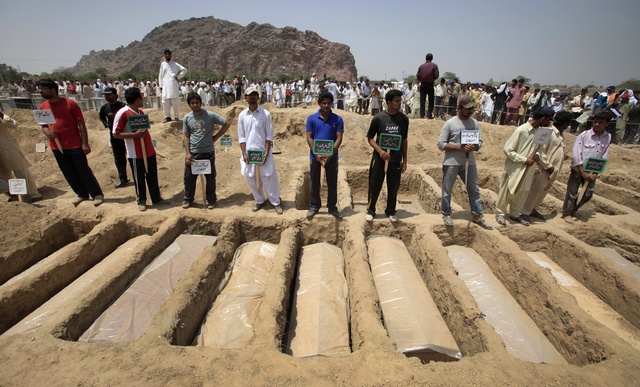 Members of the Ahmadi Muslim community hold the names of victims as they stand over their graves in Chenab Nagar, in Punjab's Chiniot District (Pakistan), on May 29, 2010.
© 2010 Reuters
Their crime? These Muslims have the temerity to suggest that Mirza Ghulam Ahmad, an Indian who died in 1908, was the promised Mahdi — the redeemer of Islam — and not one of the false prophets about whom Mohammed had warned. They compound their offense with condemnations of violent jihad, maintaining that man’s inhumanity to man is ultimately conquered by love and kindness. So, of course, the Ahmadi Muslims have to die.

They are killed in Muslim Pakistan. They are killed in Muslim Bangladesh. They are killed in Indonesia, the world’s most populous Islamic country and, putatively, its most moderate. It was there, in a village in West Java last year, that hundreds of Muslims wielding machetes, sharpened sticks, and stones set upon on an Ahmadi home, brutally murdering three men and maiming several others. True to form, Islamic clerics raced to the fore to rationalize the savagery as being provoked by Ahmadi heresy. The ringleaders were sentenced to less than six months’ imprisonment, with the country’s minister of religious affairs callously explaining that religious freedom was certainly not freedom to “modify” Islamic beliefs — and equating Ahmadi preaching, which is banned, with flag-burning.
The barbaric treatment of religious minorities in Islamic countries, and its roots in Islamic law, is undeniable . . . unless we choose not to see it. So, true to form, we are choosing not to see it.

Ayaan Hirsi Ali, the intrepid humanitarian and former Muslim, struggles to pull the world’s head from the sand, demanding that we finally bear witness to what she aptly describes as the “rising genocide” Muslim-majority countries are waging against Christians. How tragic that, right at this moment of clarity, American law enforcement has opted to blind itself in craven submission to the Muslim Brotherhood.

Under a barrage of protest by the Council on American-Islamic Relations (CAIR) and its media stooges, the New York City Police Department has now apologized for showing hundreds of recruits The Third Jihad, a 72-minute video about radical Islam. Concurrently, after badgering by the likes of CAIR, the Islamic Society of North America (ISNA), and the Muslim Public Affairs Council (MPAC), the FBI has just agreed to purge its training materials of information that elucidates the obvious — the direct nexus between mainstream Islamic doctrine, supremacist Muslim attitudes, and jihadist terror.

The Third Jihad ought to be required viewing. Don’t take my word for it. You can watch it yourself, on this website. In addition to the video, the site sheds light on the campaign against the counterterrorism strategy that has kept New Yorkers safe for the last decade despite their city’s continuing status as the jihad’s bull’s-eye in the West.

If you only read the New York Times and listened to its media echo chamber, you would think the video is a hate-dripping smear. It is anything but: Narrated by M. Zuhdi Jasser, a devout Muslim and indefatigable foe of Brotherhood ideology, and featuring interviews with Ms. Hirsi Ali, Bernard Lewis (the West’s most renowned scholar of Islam), former New York City mayor Rudy Giuliani, former Homeland Security secretary Tom Ridge, former CIA director Jim Woolsey, the inimitable commentators Mark Steyn (author of Lights Out: Islam, Free Speech and the Twilight of the West) and Melanie Phillips (author of Londonistan), and NYPD commissioner Ray Kelly — who, for some reason (no doubt related to the city’s sniffling mayor) has donned sackcloth and ashes over the great crime of admitting on camera that the city is worried about jihadists with nukes.

The demagogues have to slander the film because the only real objection to The Third Jihad is its minimization of the threat. It opens with a disclaimer: “This is not a film about Islam. It is about the threat of radical Islam. Only a small percentage of the world’s 1.3 billion Muslims are radical.” The last sentence may be true, but only because the real “radicals” in the ummah are sects like the Ahmadi . . . and we see what happens to them.

It is simply a fact that what the video is so careful to call “radical Islam” is entirely mainstream. It is not al-Qaeda that’s killing the Ahmadi in Indonesia — it is Indonesian Muslims. It is not al-Qaeda that’s mass-murdering Coptic Christians in a transparent effort to drive them out of Egypt, just as Jewish inhabitants have been driven out of Egypt — the culprits are Egyptian Muslims. The cashiering of Mubarak gave them the opportunity for self-governance, and the first things they did were to elect Islamic supremacists and intensify the rule of sharia, guaranteeing the persecution of religious minorities.

Nor is that an Egyptian phenomenon. In 2003, the United States liberated Iraqis from the tyranny of Saddam Hussein, began a campaign that ultimately routed al-Qaeda, and helped draft an Iraqi constitution that elevated sharia as fundamental law. Since then, as Ms. Hirsi Ali recounts, 900 Christians have been slain in Baghdad alone, 70 churches have been torched, and more than 500,000 Christians have fled the country, reducing the number remaining in Iraq to less than half of the Saddam-era population.

To the contrary, though The Third Jihad is forthright about the tenets and practices of “radical” ideology, it shrinks from acknowledging how widely this ideology is endorsed by influential Muslim clerics and accepted by compliant Muslim masses. We learn of the cruel death sentences meted out for apostasy and homosexuality; the legally codified abuse of women and honor killings against those who shame their families by flouting sharia strictures; the inculcation of hatred for Western society through Muslim education systems; the veneration of Hamas, Hezbollah, and the culture of jihadist martyrdom. What goes unmentioned is how readily foreseeable these consequences are as a society becomes more Islamic.

It is obvious enough why CAIR hates the video. The Third Jihad does not merely lay bare Brotherhood ideology, including the internal organizational memoranda that discuss its master plan to destroy the West from within by sabotage, as I recount in The Grand Jihad. The film also exposes CAIR’s Brotherhood roots and its deceptive Brotherhood practices — such as purporting to condemn “acts of terror” but refusing to condemn Hamas and Hezbollah. (Allow me to let you in on the code: In Brotherhood ideology, “terrorism” is the unjustified killing of Muslims, while Hamas — the Brotherhood’s Palestinian branch — and Hezbollah are deemed heroic resisters against terrorism.)

What is not so obvious is why the NYPD has decided to surrender, and why the FBI is allowing itself to become a marionette whose strings are pulled by such groups as ISNA (like CAIR, cited as an unindicted co-conspirator in the Justice Department’s prosecution of the Holy Land Foundation for financing Hamas) and MPAC (an organization with a history of praising the Brotherhood and Hezbollah — and of suggesting that Israel was behind the 9/11 attacks).

Spoken truth is an increasingly rare commodity. But truth is plain to see. Radical Islam is not very radical — it is Islamic doctrine strictly applied. Where Muslims are a tiny minority, and where countervailing cultural forces are robust enough and unapologetic enough to hem in Islam’s supremacist ambitions, Islam can be moderate and its adherents solid citizens. Where sharia is permitted to spread its wings, liberty is strangled. And where Muslims are a majority turned loose to enforce sharia, it is, as The Third Jihad puts it, a “human-rights disaster.”

You can call that Islamophobia, if you’re suffering from factophobia.

– Andrew C. McCarthy, a senior fellow at the National Review Institute, is the author, most recently, of The Grand Jihad: How Islam and the Left Sabotage America.
Posted by jtf at 8:02 AM