Hurrah for Philip! Wind power is the most ruinous folly of our age 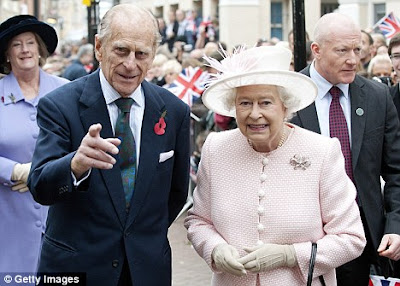 Once again, Prince Philip has performed an invaluable national service by tilting at windmills — or to be more precise in this case, wind turbines.

In private remarks that found their way into the Press, he apparently said wind turbines were ‘absolutely useless’, completely reliant on subsidies and that those who claimed they were one of the most cost-effective forms of renewable energy believed in ‘fairytales’.

The Prince’s outburst may have been impolitic but many will be cheering his words. Indeed, he understated his case. For the Government’s promotion of wind-farms is simply off-the-wall crazy from every conceivable point of view.

Not only are these turbines hugely expensive to build and operate but also — surprise, surprise — they produce zero energy if the wind is not blowing.

Conversely, when the wind blows too hard they have to be shut down. So wind power has to be supplemented by gas-fired power stations — which push into the atmosphere yet more of the dreaded carbon dioxide that the turbines are meant to help diminish.

This supposedly green development is actually environmentally unfriendly. For the turbines are not just an eyesore, but on many wind-farms they have had to be turned off after locals complained that the noise they made left them unable to sleep and even needing to wear ear-defenders in their gardens.

For these and other miseries, the population is having to pay through the nose. Public subsidies make wind power three times more expensive than normal-tariff electricity. And since such subsidies drain investment away from new conventional power plants, the risk of power cuts grows greater.

Meanwhile, a government adviser has calculated that even if 10 per cent of the country were to be covered with wind turbines, they would still generate only one-sixth of the nation’s energy needs.

Does one laugh or weep at such a farce masquerading as government policy?

More ludicrous still, it is becoming clearer by the day that the premise upon which these wind-farms are based, that increasing levels of carbon dioxide in the atmosphere are producing a catastrophic warming of the planet, has been shot to pieces. 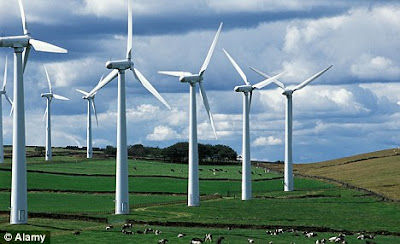 Eyesore: Supposedly-green wind turbines are, in many ways, environmentally unfriendly

For years, the scientific and political establishment has claimed that there is a ‘consensus’ that ‘the science is settled’ and that man-made global warming is beyond challenge.

But now the organisation at the very heart of this claim has sidled out a tacit admission that this is untrue — while trying to conceal that this is not in fact the mother and father of U-turns.

The Intergovernmental Panel on Climate Change, or IPCC as it is known, is the body which has driven man-made global warming theory for more than 20 years.

Despite the fact that hundreds of eminent scientists have challenged this theory, with some who have worked for the IPCC even attesting to the errors, manipulation and downright fraud at the heart of its purported ‘research’, it has never deviated from its alarmist predictions.

Until now. Suddenly, according to leaks from a new report, it is saying that it is not possible to predict changes in the Earth’s weather systems for at least the next three decades because of ‘natural climate variability’.

In other words, it might get warmer — or it might get colder. The IPCC doesn’t know which because there are too many unknowns in nature.
Well might you scratch your head. For these are the same people who have told the world that the climate will without a shadow of a doubt get so hot that the planet will fry, drown, succumb to terrible diseases, hurricanes, extinction of species and a general environmental apocalypse.

So is there something special about the next three decades which has suddenly served to halt the apocalypse in its tracks?

Of course not. The unknowns about the climate have always been there, just as the sceptics have always said — and the warmists’ terrifying predictions were always no more than a load of hot air.

What’s changed is that they know the game is now up. For even though carbon dioxide levels have been increasing, there has been no increase in global temperature for the past decade or so.

And that destroys the entire theory of man-made global warming, which is that carbon emissions inevitably and inexorably drive up temperature.

So the people who have demonised climate-change sceptics as ‘climate change deniers’ or ‘flat-earthers’ are now telling us, in a coy and roundabout kind of way, that actually no one has a clue how the climate will turn out.

If man-made global warming were merely a nonsensical idea which had taken hold of the scientific establishment entailing fraud, deception and the wholesale bullying and intimidation of all who dared speak the truth — which is indeed what has taken place over the past two decades — that would be bad enough.

But this is far, far worse even than that. For the theory which this world scientific body is now quietly trying to slide away from has driven the politics and economies of the West off the axis of reason altogether.

In its core aim to reduce carbon emissions, it has done untold damage to western prosperity. And it is Britain that has taken a leading role in exporting this madness.

By the Government’s own estimate, it would cost £404 billion to implement its Climate Change Act — £760 per household every year for four decades.

The Act included a voluntary commitment to reduce Britain’s carbon dioxide emissions by 80 per cent of their 1990 level by 2050 — a target generally acknowledged to be achievable only by shutting down most of the economy — in an effort to demonstrate ‘global leadership’.

This green zealotry has made the already grave economic crisis very much worse.

Not only are energy bills set to soar by some 60 per cent as a result, deepening fuel poverty for ordinary people, but green taxes are hampering the industrial progress on which Britain crucially depends for its economic recovery.

It has been estimated that Britain’s policy of setting a minimum price for carbon credits instead of allowing the market to decide will cost British industry at least £1 billion and drive manufacturers offshore as firms that cannot pass on their costs move abroad.

Indeed, only a few days ago, the mining giant Rio Tinto announced that new environmental taxes and red tape were partly to blame for the closure of its Lynemouth aluminium smelter in Northumberland, risking the loss of 600 jobs.

And for similar reasons, chemical multinationals are now looking to move their production to places such as South Africa, India and China.

Now Chancellor George Osborne has said he will reduce Britain’s carbon reduction target to the EU level of a mere 20 per cent cut in emissions. But in view of the lunacy of the whole policy, this is hardly an appropriate response.

For the climate change obsession of which the wind-farms are such an egregious example has been a weapon with which to sabotage the economy, vandalise the environment and drive politics to what would once have been considered the extreme of the anti-capitalist Left.

Don Quixote comically mistook the windmills at which he tilted for giant enemies. But as Prince Philip has helped us perceive, it is the wind turbines and the sham climate theory they represent which have tilted Britain and the Western world into a farce of truly lethal dimensions.