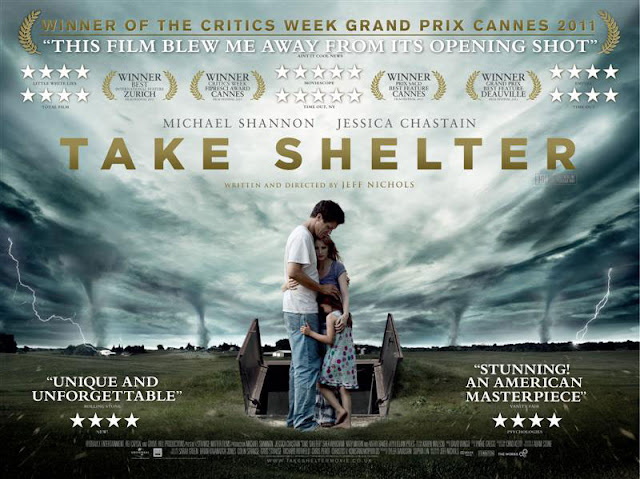 Here is a frightening thriller based not on special effects gimmicks but on a dread that seems quietly spreading in the land: that the good days are ending, and climate changes or other sinister forces will sweep away our safety. "Take Shelter" unfolds in a quiet Ohio countryside with big skies and flat horizons, and involves a happy family whose life seems contented.

It is the gift of actor Michael Shannon as Curtis LaForche that while appearing to be a stable husband and father with a good job in construction, he also can evoke by his eyes and manner a deep unease. Curtis has what he needs to be happy. He fears he will lose it. His dreams begin to be visited by unusually vivid nightmares: The family dog attacks him, for example, or storms destroy his home.

To the puzzlement of his wife, Samantha (Jessica Chastain), and their hearing-impaired daughter, Hannah (Tova Stewart), he builds a pen in the backyard for the dog, which had been living peacefully indoors. The storm dreams are not so easily managed. Ominous black clouds gather, their heavy raindrops brown and oily, and so subtle is the direction of Jeff Nichols that some of this poisoned rain seems to be real, not imaginary. They live on the outskirts of town, in an area which is swept from time to time with tornadoes.

His behavior begins to concern his best friend and workmate, Dewart (Shea Whigham), who helps him as much as he can. Their friendship dramatizes the thin ice beneath so many people these days, when employment is threatened by uncontrolled forces, and if you lose a job, there may not be another one. Stories about Curtis begin to spread in the community, and Curtis is not paranoid when he thinks people are talking about him. His explosion at a community benefit dinner is terrifying in its energy.

This is the second collaboration by writer-director and star, whose powerful "Shotgun Stories" (2007), established Nichols as a gifted new filmmaker and further cemented Shannon's growing reputation as an actor of uncommon force: the young Christopher Walken, my wife says, and he does embody the same shifting air of disquiet. As his wife, Jessica Chastain is effective in her seventh major role this year; since "The Tree of Life," has any young actress ever put together such a series of roles?

A few jolting shots early in the film establish the possibility that bad things could happen. But Nichols builds his suspense carefully. Curtis is tormented but intelligent; fearing the family's history of mental illness, he visits his schizophrenic mother (Kathy Baker) in a care facility to ask if she had ever been troubled by bad dreams. He checks books out of the library. He turns to the area's obviously inadequate public health facilities.

But he also acts as if his warnings should be taken seriously, He is driven to guard the family he loves. He borrows money from the bank and equipment from work to greatly expand an old storm shelter in his backyard. His wife grows frightened by his behavior. His job and health insurance are threatened.

And then a storm comes. Its nature need not be discussed here. It leads to a scene of searing power, in which Samantha tells Curtis that it is safe once again to return to the surface — that it is a step he must take personally. The story seems somewhat resolved. Then the film concludes not with a "surprise ending" but with a series of shots that brilliantly summarize all that has gone before. This is masterful filmmaking.

In films like "Shotgun Stories," William Friedkin's "Bug," Sam Mendes' "Revolutionary Road" and Werner Herzog's "My Son, My Son, What Have Ye Done," Shannon has attracted the best directors with his uncanny power. His performance in the play "Mistakes Were Made," was one of the most amazing performances I've ever seen. Thinking again over what he does in "Take Shelter," I think an Oscar nomination for best actor would be well-deserved. 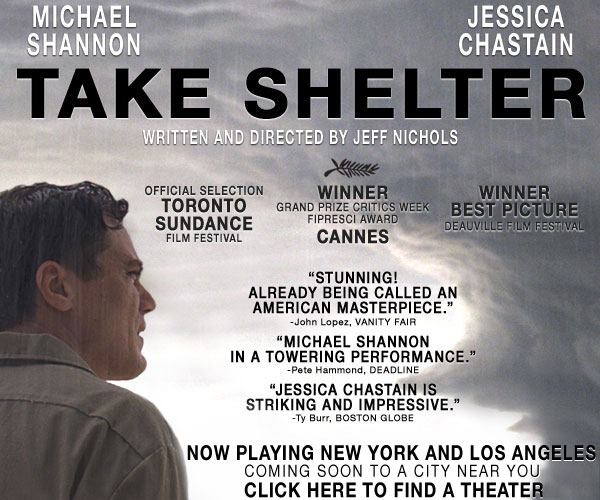 In “Take Shelter,’’ Michael Shannon plays Curtis LaForche, an Ohio husband and father who wakes up one day and smells evil on the wind. He senses it even before he wakes, in recurrent nightmares that render him mute with dread. Writer-director Jeff Nichols stages these dreams as time-lapse premonitions of apocalypse: a family dog turning on its master, flocks of birds massing in mysterious patterns, thick rain falling like oil, and shadowy figures that lunge through car windows at Curtis’s loved ones.

Because he’s a Midwesterner and a family man - because he’s responsible - Curtis initially keeps his visions to himself. The drama of this slow, inexorable stunner - Kafka in the heartland - is in watching a blessedly normal guy give in to paranoia, first in baby steps and then with something like relief. At first, Curtis just suspects. By the final scenes, he knows, and in knowing he assumes a wrath of nearly biblical proportions. He’s a modern-day Noah looking desperately for a boat.

It’s Ohio, though, and the oceans are far away. Curtis’s backyard looks out on an endless expanse of grass and clouds and, off in the distance, other people’s houses. It’s the promise of the frontier fulfilled. So instead of an ark, he starts building himself a fallout shelter, “borrowing’’ the equipment from the sand-mining company for which he works and outfitting the shelter for the long haul. Each of Curtis’s acts takes him further from the dull slipstream of Middle American life, and people start to notice: his wife, Samantha (Jessica Chastain), his best friend and work-crew companion, Dewart (Shea Whigham), and then out into the concentric rings of their small community.

What does Curtis see? The chilling genius of “Take Shelter’’ isn’t that the threat is never specified but that it doesn’t need to be. There’s a broken economy behind those roiling clouds, and terrorism, and a planet spinning toward meltdown. There’s a faceless bureaucracy that takes forever to schedule cochlear-implant surgery for the couple’s hearing-impaired daughter (Tova Stewart) and that hangs Curtis out to dry when he seeks medical help. There’s the time-bomb in our genes: He worries that he has inherited the schizophrenia that has turned his mother (Kathy Baker) into a husk. There are mortgages and bills, the looming sense that an angry God or an unheeding universe could snuff us out like fleas. What isn’t there in this world to unman us at any moment?

Michael Shannon is one of our best working actors, but he keeps getting typecast as a squirrelly outsider, like the outpatient in “Revolutionary Road’’ or the gonzo record producer in “The Runaways.’’ (He even makes his Prohibition agent in HBO’s “Boardwalk Empire’’ a figure of demented righteousness.) He has a much greater range, of course, and “Take Shelter’’ allows him to traverse almost all of it. Curtis is a good man with a good life, as Dewart is careful to remind him, and Shannon roots the character in a plainspoken decency that feels American and true. You can smell the sweat on this man’s work shirt and you know he comes by it honestly.

As the demons press in, though, Shannon lets Curtis’s terror build in increments, the open face hardening and the eyes staring at things the rest of us can’t see. He’s working toward detonation, and when it comes, it’s with a rage that’s almost beautiful in its purity. Because this is Michael Shannon, you know the hero has to flip out sooner or later, but the scene itself is indelible, iconic - a great movie moment - and much of its power lies in the image of small, scared humans shrinking from the prophet revealed in their midst.

This is also very much Chastain’s film. The actress has had quite a year, with roles in no less than six films including “The Tree of Life,’’ “The Debt,’’ and “The Help,’’ but this is the performance that makes good on her promise. Samantha is similar to but much more particularized than the mother in “Tree of Life’’ - she’s nobody’s metaphor. There’s sinew beneath the character’s weary grace, and when Sam finally realizes she has to take charge of her fraying family, her determination coexists with her gentleness in ways that break your heart.

“Take Shelter’’ plays Curtis’s unraveling at daring length. The film will be too slow and dark for some, and it’s definitely overlong. Its biggest flaw is the final scene, in which Nichols decides he has to resolve the matter. Is Curtis crazy or is he right? The tension of not knowing - the gnawing uncertainty both we and the hero feel - is the spring that keeps this movie running, and when the filmmaker chooses one answer over the other (it almost doesn’t matter which), “Take Shelter’’ suddenly becomes a lesser thing.

It’s still a remarkable work and one that addresses anxieties rarely acknowledged in our culture. “Take Shelter’’ speaks elliptically but directly to the fears most men have (and keep fiercely to themselves) that they don’t have what it takes - that when disaster comes, as it must, they will be pitifully helpless to protect those in their care. I’m not even sure you can feel the full impact of Nichols’s vision if you don’t have a family of your own to provide for.

Watching the film, I was reminded of one of the most moving works of art I know, Egon Schiele’s 1918 painting “The Family,’’ in which a nameless man, woman, and child huddle against the darkness, gazing out past the frame with expressions stuck between uneasiness and hope. If you have children, you know that look in the father’s eyes. So, clearly, does Curtis. “Take Shelter’’ is a horror movie for grown men, and it hits many of us exactly where we live.