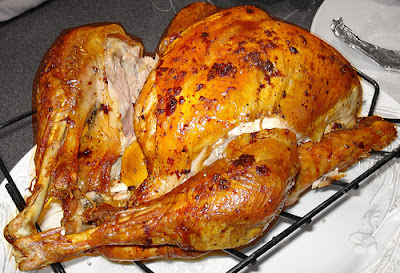 Did you know that the turkey you're going to enjoy on Thanksgiving Day this Thursday is probably halal? If it's a Butterball turkey, then it certainly is -- whether you like it or not.

In my book Stop the Islamization of America: A Practical Guide to the Resistance, I report at length on the meat industry's halal scandal: its established practice of not separating halal meat from non-halal meat, and not labeling halal meat as such. And back in October 2010, I reported more little-noted but explosive new revelations: that much of the meat in Europe and the United States is being processed as halal without the knowledge of the non-Muslim consumers who buy it.

I discovered that only two plants in the U.S. that perform halal slaughter keep the halal meat separated from the non-halal meat, and they only do so because plant managers thought it was right to do so. At other meat-packing plants, animals are slaughtered following halal requirements, but then only a small bit of the meat is actually labeled halal.

Now here is yet more poisonous fruit of that scandal.

A citizen activist and reader of my website www.AtlasShrugs.com wrote to Butterball, one of the most popular producers of Thanksgiving turkeys in the United States, asking them if their turkeys were halal. Wendy Howze, a Butterball Consumer Response Representative, responded: "Our whole turkeys are certified halal."

In a little-known strike against freedom, yet again, we are being forced into consuming meat slaughtered by means of a torturous method: Islamic slaughter.

Halal slaughter involves cutting the trachea, the esophagus, and the jugular vein, and letting the blood drain out while saying "Bismillah allahu akbar" -- in the name of Allah the greatest. Many people refuse to eat it on religious grounds. Many Christians, Hindus or Sikhs and Jews find it offensive to eat meat slaughtered according to Islamic ritual (although observant Jews are less likely to be exposed to such meat, because they eat kosher).

Others object because of the cruelty to animals that halal slaughter necessitates. Where are the PETA clowns and the ridiculous celebs who pose naked on giant billboards for PETA and "animal rights"? They would rather see people die of cancer or AIDS than see animals used in drug testing, but torturous and painful Islamic slaughter is OK.

Still others refuse to do so on principle: why should we be forced to conform to Islamic norms? It's Islamic supremacism on the march, yet again.

Non-Muslims in America and Europe don't deserve to have halal turkey forced upon them in this way, without their knowledge or consent. So this Thanksgiving, fight for your freedom. Find a non-halal, non-Butterball turkey to celebrate Thanksgiving this Thursday. And write to Butterball and request, politely but firmly, that they stop selling only halal turkeys, and make non-halal turkeys available to Americans who still value our freedoms.

Stephanie Styons at Butterball Corporate sstyons@merrellgroup.com is the contact for those who want to let the company know their feelings about stealth halal turkeys. Also here is the Butterball website for plant locations, which lists whole turkeys as being produced at their North Carolina and Arkansas plants.

Across this great country, on Thanksgiving tables nationwide, infidel Americans are unwittingly going to be serving halal turkeys to their families this Thursday. Turkeys that are halal certified -- who wants that, especially on a day on which we are giving thanks to G-d for our freedom? I wouldn't knowingly buy a halal turkey -- would you? Halal turkey, slaughtered according to the rules of Islamic law, is just the opposite of what Thanksgiving represents: freedom and inclusiveness, neither of which are allowed for under that same Islamic law.

The same Islamic law that mandates that animals be cruelly slaughtered according to halal requirements also teaches hatred of and warfare against unbelievers, the oppression of women, the extinguishing of free speech, and much more that is inimical to our freedom. Don't support it on this celebration of freedom. Join our Facebook group, 'Boycott Butterball'.

Pamela Geller is the publisher of AtlasShrugs.com and the author of the WND Books title Stop the Islamization of America: A Practical Guide to the Resistance.
Posted by jtf at 9:53 AM