Three Policies That Gave Us the Jobs Economy

Sometimes two separate news events turn out to be related. That's the case with the Wall Street protesters and the extraordinary mourning at the death of Steve Jobs.

Some protesters have praised Jobs as the billionaire who was different—unlike the callous Wall Streeters, he was "beneficial to society." There's a second connection. More than anything else, the Wall Street protesters feel powerless, mere individuals against great banks. Maybe the mourning over the Apple founder is so intense precisely because Jobs gave individuals power. It's hard to think of a gift more empowering than your own personal computer.

Also fueling the grief is a more general suspicion that another Jobs won't come along soon. He was a creature of his times, the late 1970s, the 1980s and 1990s. There wasn't merely Jobs; there was also that economy in which he and other venture-capital recipients operated. Americans fear that the opportunities Jobs enjoyed won't come again.

It's worthwhile therefore to go back and look at what happened in those years, and then to look at how policy changes may have affected innovating firms that received venture capital.

In 1977, public underwritings of firms with a net worth of less than $5 million amounted to a meager $75 million. By 1980 that figure was $822 million, as Michael K. Evans, founder of Chase Econometrics, points out. The venture-capital boom continued down the decades, serving computing, technology, biotech and many other areas. 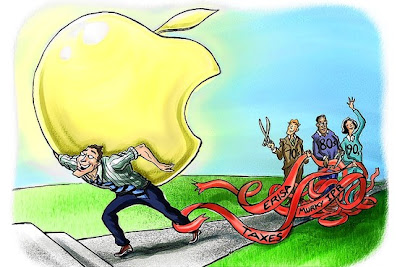 Over time, what we might call the Jobs Economy led to a jobs economy. In the past quarter-century, Apple and innovative companies like it yielded employment for a whole region, Silicon Valley; an improvement in America's standard of living with the creation of personal computing; and productivity gains throughout the economy.

But what caused this boom? Three policy changes. The first was a tax cut for which this newspaper campaigned.

In the late 1960s, Congress had raised the tax rate on capital gains dramatically, to 49%. The received wisdom behind the increase was that mainly wealthy people realized capital gains, and that, a la Warren Buffett, the wealthy ought to pay a larger share of social programs for lower earners. But venture capital dried up so much that by 1977-78 even the Carter administration nursed doubts about high rates.

Voices advocating a rate cut soon grew louder. The idea found a champion in 40-year-old Rep. William Steiger, whom Time magazine profiled as "a baby-faced Wisconsin Republican who has the gung-ho style of a JayCee president." Time worriedly reminded readers that in Steiger's capital gains tax-cut plan "the benefits go to people with incomes of $100,000 or more"—back then, the rich.

Steiger nonetheless found dozens of co-sponsors. He succeeded in getting Congress to pass the Steiger Amendment, which halved the capital gains rate, to an effective 25%.

Many wealthy people did indeed make more money as a result, including some of those less-lovable billionaires on Wall Street. But they then invested in companies like Apple. The revenues from the rich-man's rate cut were stronger than expected, so the federal government got more money to spend—more money than expected for those social programs.

A second policy change came in pension law. In 1974, the Employee Retirement Income Security Act, known as Erisa, codified the common law prudent-man principle by warning pension investors that they might be neglecting their fiduciary responsibilities if they invested in risky projects like Apple. The pension funds and portfolio investors duly stayed away. That changed when the definitions were relaxed later in the 1970s, as Josh Lerner and Paul Alan Gompers have noted in "The Money of Invention." Pension funds could again tell themselves and their clients that they were acting responsibly when they invested in start-ups. The funds began to put more cash into venture capital.

A third factor, and one that ensured the boom would continue, was a law passed in 1980. Sponsored by Sens. Birch Bayh of Indiana and Bob Dole of Kansas, the measure clarified murky intellectual property rights so that universities and professors, especially, knew they owned their own ideas and could sell them. That knowledge gave professors and lab teams an enormous incentive to put to commercial use plans and ideas for inventions that they had long ago shelved in their minds and offices.

To these three advantages one might add a fourth. The advantage of a disadvantage: the poor performance and reduced expectations of the 1970s. New technology (telephones that showed the face of the person you were calling, linked networks of computers) had been around for years, but they languished in those university offices or in museum displays.

The demand for this new technology, frustrated as it was, built and built. It meant that when someone like Jobs finally did deliver a gizmo, his market was a whole impatient generation of would-be gadget handlers, people who were delighted to have new technology and delighted to find new applications for it.

"Personal Computers are Becoming More Useful to Many Investors," wrote Journal editors in wonderment in 1980. It's not inconceivable that similar changes in policy today might yield a similar boom. When it comes to taxes, the 1970s takeaway is that taxes on capital should always be lowered, and dramatically. Cutting a rich man's tax can serve the lowliest citizens.

The second takeaway is that an administration's choices matter when editing, interpreting or enforcing statutes and regulation. The Erisas of today are Dodd-Frank and Sarbanes-Oxley; subtle clarifications in their rules can affect the overall gross domestic product. A third is that property rights matter; today's Bayh-Dole should be patent reform.

But last of all there's the silver lining to our current cloud. It is that the economic mediocrity of the recent years constitutes someone's advantage. And that someone is young innovators. All this time, demand has once again been building. As soon as the economy feels reliable, people will go out and make the 2015 equivalent of the early PC.

Miss Shlaes, author of the forthcoming "Coolidge" (HarperCollins), joined the George W. Bush Institute this week as director of its economic growth project.
Posted by jtf at 5:46 AM