It continues as the CLASS Act collides with accounting reality. 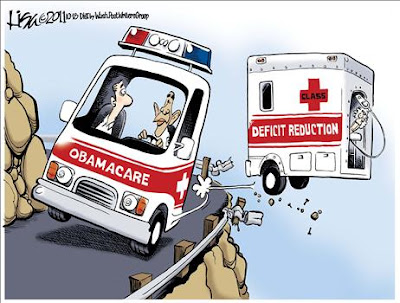 If only blinkered denial were a sound guide to policy. Then, Obamacare might be vindicating all the promises made on its behalf during the fevered push for its passage.

Alas, there’s no such place as the Big Rock Candy Mountain, where, as the hobo anthem has it, “the hens lay soft-boiled eggs” and “the handouts grow on bushes.”

One of the law’s more blatant gimmicks just died after the administration ran smack into the adamantine rules of basic accounting, and one of the law’s central provisions might be overturned by the Supreme Court. The Obama administration’s signature legislative accomplishment is a standing testament to the foolishness of saying and doing anything to pass a bill as complex and sensitive as one remaking the American health-care system.

The expiring budgetary gimmick is the Community Living Assistance Services and Supports, or CLASS, Act. This new entitlement for long-term care was going to collect premiums for five years before paying out benefits. In the highly theoretical bookkeeping of the Congressional Budget Office, this made it a deficit-reduction measure; the program would collect $70 billion over the first ten years of Obamacare, the window for CBO estimates. Thereafter, it would pay out benefits at an unsustainable clip.

Only in Washington could lighting a fuse on an exploding entitlement be considered an act of fiscal rectitude, but the CLASS Act accounted for almost half of the official deficit reduction of Obamacare. Everyone knew it was shameless legerdemain. In 2009, the Democratic chairman of the Senate Budget Committee pronounced the CLASS Act a “Ponzi scheme of the first order.” The actuary for Medicare warned during the drafting of the program, “Thirty-six years of actuarial experience lead me to believe that this program would collapse in short order and require significant federal subsidies to continue.”

The Obama administration persisted anyway. The long-term-care program had been a cherished priority of the late Ted Kennedy, and besides, it helped with the numbers. Obama’s Department of Health and Human Services wrestled to make the program workable before giving up last week. An HHS official with a gift for understatement explained that putting the program on a sound actuarial footing during the next 75 years and implementing it as written were goals in “some tension.”

To work, the CLASS Act needed a mandate. Otherwise, young and healthy people wouldn’t sign up for it, and the cost of premiums would spiral out of control. This is why, more broadly, the individual mandate is so important to Obamacare. Without it, the health-insurance system will experience the same “death spiral” that prospectively doomed the CLASS Act.

The promised wonders of the law are faring poorly. Premiums are up, and the CBO says Obamacare will not control costs over the long run. White House deputy chief of staff Nancy-Ann DeParle insists the president’s assurance that families will see their premiums reduced by $2,500 annually will indeed materialize — around 2019, three years after the end of an Obama second term.

Studies are showing that more employers than anticipated may stop offering their employees insurance, thus increasing costs to the federal government. In this connection, DeParle has added a caveat to the president’s oft-repeated assurance that people can keep the coverage they have. What he really meant, she says, is that people won’t be affirmatively forced out of their plans by government, which has a less reassuring ring.

Malcolm Muggeridge once said, “People do not believe lies because they have to, but because they want to.” It was in this spirit that Democrats wanted to believe in Obamacare. The CLASS Act is the first, but surely not the last, rude collision between their wishfulness and reality.

— Rich Lowry is the editor of National Review. He can be reached via e-mail: comments.lowry@nationalreview.com.
Posted by jtf at 5:28 AM