Biden Sticks to the Playbook

The vice president is an ugly reflection of his boss. 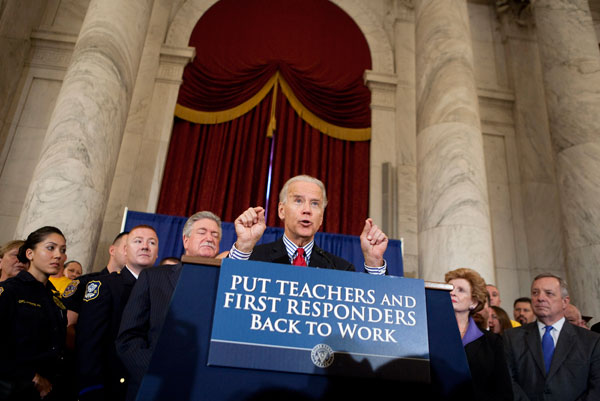 
‘I wish [critics of the administration’s jobs bill] had some notion of what it was like to be on the other side of a gun, or [to have] a 200-pound man standing over you, telling you to submit [to rape].” — Vice President Joe Biden, October 18, University of Pennsylvania

“ . . . at a time when our discourse has become so sharply polarized, at a time when we are far too eager to lay the blame for all that ails the world at the feet of those who think differently than we do, it’s important for us to pause for a moment and make sure that we are talking with each other in a way that heals, not a way that wounds.” — Barack Obama, Jan. 12, 2011, Tucson, Ariz.

Joe Biden is not a big effing deal, as he might say.

In fairness, few vice presidents matter, and Biden suffers by comparison to his immediate predecessor, who mattered more than most.

As you know, the current vice president says dumb things, funny things, weird things. He talks like the sort of guy who sits right next to you on the bus even though there are plenty of empty seats — just so he can explain how squirrels aren’t mammals.

Indeed, in many respects, he’s as close as American politics gets to a wacky sitcom character who’s a couple fries short of a Happy Meal.

Remember when he told us how President Roosevelt went on TV to reassure America after the 1929 stock market crash? It wasn’t until later that someone reminded him that no one had TVs in 1929, and that FDR wasn’t president. Remember when he insisted that in Delaware, “you cannot go to a 7-Eleven or a Dunkin’ Donuts unless you have a slight Indian accent. . . . I’m not joking”?

He wasn’t joking then, and he’s not joking now when he says that if you oppose the president’s jobs bill — which currently enjoys bipartisan opposition in the Senate — you’re okay with more rapes and murders.

No wonder he thinks many Republicans acted like “terrorists” during the budget negotiations last summer.

And speaking of terrorists, my complaint about Biden has always been that he gets to behave like the late PLO leader Yasser Arafat. By that I mean Arafat got a free pass from many in the West because he would only say horrible things in Arabic while he would talk peace in English.

Biden’s double standard allows him to enjoy a kind of political immunity that only encourages asinine impunity.

When he says outrageous, idiotic, and reprehensible things, the mainstream press and the Democratic party shrug, even smile, and say, “Oh, that’s just Joe.” And if he says something nobody can ignore, he’s always allowed to take it back because everyone knows he has as much control over his mouth as Pakistan does over its tribal regions.

Biden may not matter much, but his boss does. And that’s why it’s worth pointing out that Biden isn’t simply freelancing out there.

Like all vice presidents, part of his job is to carry water for his boss, and he carries more water than Gunga Din. “In my wildest dreams,” he proclaimed of the stimulus, “I never thought it would work this well.”

When his boss doesn’t want him to repeat his crazy talk, Biden dutifully zips his yapper. Not this time. Why? Because this is part of the White House’s overall strategy to demonize the opposition. It’s from the same playbook that has Obama insisting that Republicans are for “dirtier air, dirtier water,” and are woefully deficient in decency and honesty. It is also the same playbook that makes an absolute mockery of the new politics Obama routinely calls for.

Joe Biden is Barack Obama’s loyal pet, and like even the most loyal dog, he sometimes has an accident on the carpet. But he still does his master’s bidding when asked.

And that is the one way Biden matters. He is a reflection of his boss, and an accurate one at that.

— Jonah Goldberg is editor-at-large of National Review Online and a visiting fellow at the American Enterprise Institute. You can reach him by e-mail at JonahsColumn@aol.com, or via Twitter @JonahNRO. © 2011, Tribune Media Services, Inc.
Posted by jtf at 7:45 AM