Ted Williams’s .406 Is More Than a Number 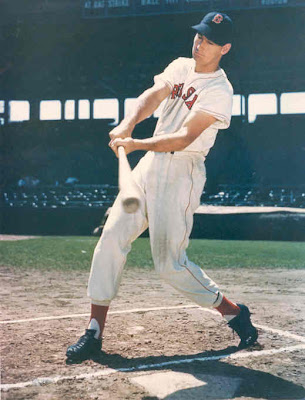 Inside his room at Philadelphia’s Ben Franklin Hotel on Saturday, Sept. 27, 1941, Ted Williams was jumpy and impatient. That might have been an apt description of the mercurial Williams at most times, but on this evening he had good cause for his unease.

His batting average stood at .39955 with a season-finale doubleheader to be played the next day at Shibe Park, home of Connie Mack’s Athletics. Since batting averages are rounded to the next decimal, Williams could have sat out the final two games and still officially crested baseball’s imposing .400 barrier.

But waiting it out in the hotel was asking too much. Recruiting the clubhouse man Johnny Orlando for companionship, Williams marched into the streets of Philadelphia. They walked for more than three hours, with Orlando stopping at bars for occasional sustenance as Williams, who rarely drank alcohol, sipped a soft drink outside.

“I kept thinking about the thousands of swings I had taken to prepare myself,” Williams said years later. “I had practiced and practiced. I kept saying to myself, ‘You are ready.’ I went to the ballpark the next day more eager to hit than I had ever been.”

As another regular season winds toward a close — with no batter above .350 — it may be time to more fully appreciate Williams’s profound, singular achievement. For 70 years, Williams’s .406 season has often been a baseball accomplishment positioned just to the edge of the brightest spotlight.

It was insufficiently acknowledged in 1941 largely because five players had hit better than 400 seven times in the previous 20 years. Only 10,268 fans attended the doubleheader in Philadelphia, and out-of-town newspapers like The New York Times published only brief wire-service accounts.

Acclaim for Williams’s feat increased each decade as no other hitter reached .400, but the attention rarely reached the awe and veneration attached to, say, Babe Ruth’s home run records. Williams’s season, and the number .406, may be known to all serious baseball fans, but does it carry the magic attraction of Joe DiMaggio’s 56-game hitting streak in 1941? That summer is cast in the animated light of DiMaggio’s dauntless pursuit, a beacon of stylish triumph for a dashing figure.

Overshadowed is Williams’s conquest, completed on an overcast, raw day — a last-day-of-the-season footnote. Even in Boston, where it made front-page news, the celebration was abridged. A day later, the sports headlines focused on the coming Yankees-Brooklyn Dodgers World Series. The front-page headlines involved war in Europe. In a short time, DiMaggio won the Most Valuable Player award with nearly twice the number of first-place votes as the runner-up Williams, who had led the league in home runs and missed the triple crown by five runs batted in.

Over time, Williams’s .406 season earned a different, almost backhanded distinction. It was used to illustrate the end of an era: before baseball was desegregated, before night games and before the advent of modern strategies like specialized relief pitchers. It was treated like a relic — amazing but artifact.

Seventy years, however, may finally be enough to view Williams’s season differently. It may be the most thorough reflection of a player often called baseball’s greatest hitter. Although Williams was just 23 at the end of the season, 1941 has become the calling card of his career, no small achievement considering he retired in 1960 standing third on the career home run list behind Ruth and Jimmie Foxx.

The 1941 season revealed in total the precision, the resolve and the potent mix of aptitude and ardor that exemplified Williams the hitter. It is a 20th-century baseball masterpiece unlike any other, carved not across one World Series, one month or even 56 games but from April 15 to Sept. 28. Every single at-bat figured in the outcome, unlike when a hitter chases home run records.

“It was something that required a kind of nonstop consistency,” Williams said on the 50th anniversary in 1991. “I never thought of it as going 2 for 5 every day, but that’s what it adds up to. I had to maintain my focus throughout. Although I never imagined that all these years later, no one else would do it again.

“If I had known hitting .400 was going to be such a big deal, I would have done it again.”

‘A Lesson to All’

The steadiness of Williams’s season is best, and most appropriately, borne out in numbers.

¶ After missing most of April with a broken bone in his right foot, Williams hit .436 in May.

¶ During his 56-game hitting streak, DiMaggio batted .408. During the same stretch of games, Williams hit .412.

¶ Williams hit .470 against the Yankees, who won the American League pennant by 17 games behind a pitching staff that yielded the fewest runs and hits.

¶ His slugging percentage was .735. Until Mark McGwire in 1998, only five players in either league had recorded a higher single-season mark.

¶ Sacrifice flies were counted as at-bats. Under today’s rules, Williams might have hit .411 to .419, based on accounts of games that season.

In an essay within the 1994 book “Ted Williams: A Portrait in Words and Pictures,” the Harvard paleontologist and popular science writer Stephen Jay Gould called Williams’s 1941 season “the greatest achievement in 20th-century hitting” and “a lesson to all who value the best in human possibility.”

Williams’s manager in 1941, the future Hall of Famer Joe Cronin, put it more succinctly: “Nobody could get him out.” 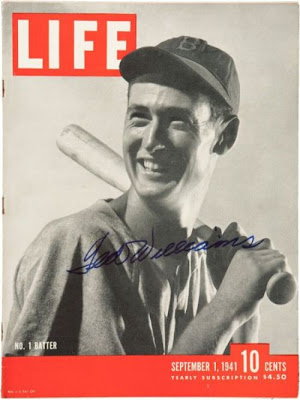 Williams spent the rest of his life — he died in 2002 — explaining that the .406 season was a result of his tireless dedication to what he labeled the science of hitting, and refining it consumed him. He did not, for instance, usually talk about fielding, base running or bunt strategy, but he would make strangers show him their batting swings. Then he would correct their flaws.

Williams did not consider 1941 his best season. He was just as likely to mention 1957, when at 39, he led the league with a .388 average (with 33 intentional walks). But Williams recognized several distinctive circumstances about the 1941 season.

After an unsteady acclimation to the East Coast in 1939 — Williams had been raised in San Diego — and after a rocky welcome in the veteran-filled Boston clubhouse, 1941 was the year Williams finally settled into a routine that suited his active mind.

According to “Ted Williams: The Biography of an American Hero” by Leigh Montville, Williams would rise at 6 a.m. and, with his teammate Charlie Wagner, drive 20 minutes west of Boston to Sunset Lake, where they fished undisturbed for a couple of hours. With the games starting at 3 p.m., Williams arrived before noon and started swinging a bat or a broomstick in the clubhouse. Waving an object to mimic his baseball swing, even if it was a hair brush in front of a mirror, took up hours of Williams’s days.

After many games, he took extra batting practice. A quick dinner followed — he was a famously fast eater — then he loved an evening watching a Western at the movies.

Adding to his comfort, he was familiar with most of the pitchers in the American League and had memorized their tendencies and pitching repertories. He mined the daily box scores for clues about each pitcher to update his mental databank. And because he was popular with umpires — he never argued balls and strikes — he could glean useful information about pitchers they had recently seen. Reaching base, Williams would converse with the nearest umpire, hoping to learn if someone had a new pitch or seemed overly reliant on his fastball. No insight was too small to Williams. (Such fraternization between umpires and players is now prohibited.)

Of all the advantages he might have had in 1941, the biggest was the spring training injury to his right ankle. It limited him to fewer than 20 at-bats in April, most of them as a pinch-hitter.

“That was big because I missed the cold weather, when most hitters can’t hit anyway,” said Williams, who could accurately recall details of his baseball career well into his 70s.

He reinjured his ankle just after the All-Star Game, which forced him out of the starting lineup for another 12 days. His average had dipped to .396. When he returned, he immediately went 12 for 22 and raised his average to .408 and never dropped below .400 again, at least by baseball’s official mathematics.

Rod Carew, one of the few to make a serious run at .400 since Williams, has studied the .406 season and contends that Williams’s absences were a blessing.

John Olerud was hitting .400 on Aug. 2, 1993, the second latest that anyone has carried a .400 average in a season since Williams. (Brett was hitting .400 on Sept. 19, 1980.) Olerud raved about Williams’s eye for the strike zone and his plate coverage but wondered whether he had benefited from playing when starters usually pitched complete games.

“If you’re seeing a pitcher for the fourth time, it is easier,” Olerud said.

“Even back when I played, more pitchers went nine innings,” he wrote, “and I was more likely to get a hit when I faced a pitcher for the third or fourth time than I would be facing a fresh Lee Smith or Mariano Rivera in the eighth or ninth inning.”

On this issue, Williams always conceded that some changes, like a bullpen full of specialists, might have made hitting harder since the 1940s, but that other changes might have made it easier, like the major league expansion to 30 teams from 16, which probably diluted the overall pitching talent.

Williams was convinced that another .400 hitter would come along. When Nomar Garciaparra was hitting .403 for Boston in late July 2000, he had frequent conversations with Williams.

Williams did enjoy his .406 season, right down to the final hit on Sept. 28, 1941 — a rocket that crashed into a bulky loudspeaker atop a fence in right-center field. A piece of the loudspeaker broke off as the ball bounced back into the outfield for a double.

The second game of the doubleheader ended after eight innings because of darkness. Otherwise, Williams might have gotten another at-bat. And a chance to hit .407.

Afterward, teammates congratulated Williams with a gusto that would have been unfathomable two years earlier, when he was perceived as a cocky rookie. Williams kissed his bat for a photographer.

Then he went back into the streets of Philadelphia. How did Williams celebrate?

He walked from the ballpark until he found a shop that served chocolate milkshakes. That was Williams’s best recollection. The baseball parts he knew for sure. The other stuff?

“I think it was chocolate,” he said many years later. “I really can’t remember.”