Those of us from Chicago know exactly what the Solyndra scandal smells like. And It doesn't smell fresh and green. 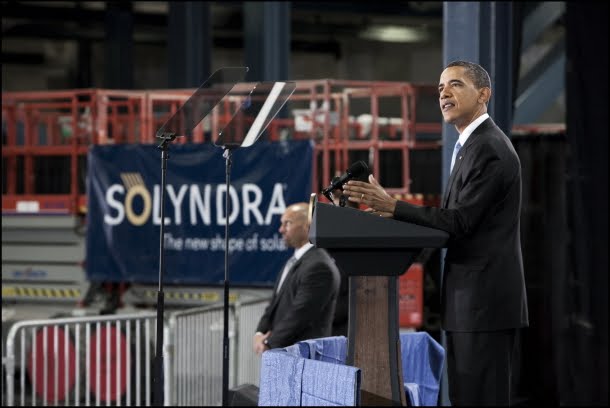 The Solyndra scandal cost at least a half-billion public dollars. It is plaguing President Barack Obama. And it's being billed as a Washington story.

But back in Obama's political hometown, those of us familiar with the Chicago Way can see something else in Solyndra — something that the Washington crowd calls "optics." In fact, it's not just a Washington saga — it has all the elements of a Chicago City Hall story, except with more zeros.

The FBI is investigating what happened with Solyndra, a solar panel company that got a $535 million government-backed loan with the help of the Obama White House over the objections of federal budget analysts.

Obama and Vice President Joe Biden got a nice photo op. They got to make speeches about being "green." But then Solyndra went bankrupt. Americans lost jobs. Taxpayers got stuck with the bill. And members of Congress are now in high dudgeon and making speeches.

Federal investigators want to know what role political fundraising played in the guarantee of the questionable loan. Washington bureaucrats warned the deal was lousy. And White House spokesmen flail desperately, like weakened victims in a cheesy vampire movie.

So forget optics. What about smell? It smells bad, and it's going to smell worse.

Or, did you really believe it when the White House mouthpieces — who are also Chicago City Hall mouthpieces — promised they were bringing a new kind of politics to Washington?

This is not a new kind of politics. It's the old kind. The Chicago kind.

And now the Tribune Washington Bureau has reported that the U.S. Department of Energy employee who helped monitor the Solyndra loan guarantee was one of Obama's top fundraisers.

Steve Spinner was the Obama administration official in charge of handing out billions and billions of tax dollars to "green" energy deals. According to the Tribune story, Spinner the other day invited Obama's national political finance committee to a meeting in Chicago.

The name of the Obama fundraising initiative?

The idea of the Obama fundraisers getting together, talking "green," and perhaps offering taxpayer loan guarantees to insider businesses in the interest of helping the environment — it all seems rather fresh.

Until you realize it's the same old politics, the same kind practiced in Washington and Chicago and anywhere else where appetites are satisfied by politicians. When the government picks winners and losers, who's the loser? Just look in the mirror, hold that thought, and tell me later.

Republicans are hoping to hang this around Obama's political neck, and they're doing a good job of it now because his approval ratings are low and the jobless numbers are abysmal and the Democrats are in full killer-rabbit panic. But there have been Republican national scandals, too, and they're always ridiculously and depressingly similar.

At least in Illinois our scandals are quite ecumenical, with Republicans eager to help Democrats steal whatever they can grab.

In Solyndra, like any proper City Hall political scandal, there are similar archetypes.

There are the guys who count. The guys who bring the cash. They count because they do the counting. They have leverage. They're always there at the fundraisers. And so they're the ones who are allowed to gorge at the public trough.

The bureaucrats are the fulcrum so the guys with the leverage can lift great weight without too much effort. And while they might whine privately among themselves, they don't hold news conferences to blow the whistle.

They keep their mouths shut until the deal is done. If anyone gets caught and the problem becomes public, at least they've got email to cover their behinds. And they're doing a good job covering.

But there's one group that doesn't get their behinds covered.

Instead, their behinds are right out there, suspended foolishly, and waiting to get kicked.

We're the taxpayers — in Illinois we call ourselves chumbolones because we're the ones who stupidly end up covering all the losses. As in the Solyndra mess.

It's the Chicago Way, but instead of a paving or trucking contract, it's a "green" solar panel contract. The company received a $535 million loan.

"The optics of a Solyndra default will be bad," according to a Jan. 31 email from an Office of Management and Budget staffer printed in the Washington Post. "If Solyndra defaults down the road, the optics will arguably be worse later than they would be today. … In addition, the timing will likely coincide with the 2012 campaign season heating up."

I love the use of "optics." It's one of those bloodless words finding favor these days.

So this is not about Washington optics after all. The Solyndra scandal is about the Washington smell of things.

Those of us from Chicago know exactly what it smells like. And It doesn't smell fresh and green.

jskass@tribune.com
Posted by jtf at 7:38 AM