Return of the real Obama 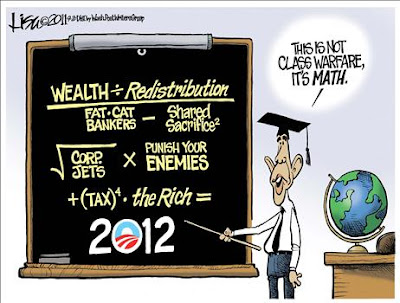 In a 2008 debate, Charlie Gibson asked Barack Obama about his support for raising capital gains taxes, given the historical record of government losing net revenue as a result. Obama persevered: “Well, Charlie, what I’ve said is that I would look at raising the capital gains tax for purposes of fairness.”

A most revealing window into our president’s political core: To impose a tax that actually impoverishes our communal bank account (the U.S. Treasury) is ridiculous. It is nothing but punitive. It benefits no one — not the rich, not the poor, not the government. For Obama, however, it brings fairness, which is priceless.

He also insists again upon raising marginal rates on “millionaire” couples making $250,000 or more. But roughly half the income of small businesses (i.e., those filing individual returns) would be hit by this tax increase. Therefore, if we are to believe Obama’s own logic that his proposed business tax credits would increase hiring, then surely this tax hike will reduce small-business hiring.

Obama himself has said that “you don’t raise taxes in a recession.” Why then would he risk economic damage when facing reelection? Because these proposals have no chance of being enacted, many of them having been rejected by the Democratic-controlled Congress of Obama’s first two years in office.

Moreover, this is not an economic, or jobs, or debt-reduction plan in the first place. This is a campaign manifesto. This is anti-millionaire populism as premise for his reelection. And as such, it is already working.

Obama’s Democratic base is electrified. On the left, the new message is playing to rave reviews. It has rekindled the enthusiasm of his core constituency — the MoveOn, Hollywood liberal, Upper West Side precincts best described years ago by John Updike: “Like most of the neighborhood, she was a fighting liberal, fighting to have her money taken from her.”

Added Updike: “For all her exertions, it never was.” But now with Obama — it will be! Turns out, Obama really was the one they had been waiting for.

That is: the new Obama, today’s soak-the-rich, veto-threatening, self-proclaimed class warrior. Except that the new Obama is really the old Obama — the one who, upon entering office in the middle of a deep economic crisis, and determined not to allow “a serious crisis to go to waste” (to quote his then-chief of staff), exploited the (presumed) malleability of a demoralized and therefore passive citizenry to enact the largest Keynesian stimulus in recorded history, followed by the quasi-nationalization of one-sixth of the economy that is health care.

Considering the political cost — a massive electoral rebuke by an infuriated 2010 electorate — these are the works of a conviction politician, one deeply committed to his own social-democratic vision.

That politician now returns. Obama’s new populism surely is a calculation that his halfhearted feints to the center after the midterm “shellacking” were not only unconvincing but would do him no good anyway with a stagnant economy, 9 percent unemployment and a staggering $4 trillion of new debt.

But this is more than a political calculation. It is more than just a pander to his base. It is a pander to himself: Obama is a member of his base. He believes this stuff. It is an easy and comfortable political shift for him, because it’s a shift from a phony centrism back to his social-democratic core, from positioning to authenticity.

The authentic Obama is a leveler, a committed social democrat, a staunch believer in the redistributionist state, a tribune, above all, of “fairness” — understood as government-imposed and government-enforced equality.

That’s why “soak the rich” is not just a campaign slogan to rally the base. It’s a mission, a vocation. It’s why, for all its gratuitous cynicism and demagoguery, Obama’s populist Rose Garden lecture on Monday was delivered with such obvious — and unusual — conviction.

He’s returned to the authenticity of his radical April 2009 “New Foundation” address (at Georgetown University) that openly proclaimed his intent to fundamentally transform America.

Good. There’s something to be said for authenticity. A choice, not an echo, said Barry Goldwater. The country will soon choose, although not soon enough.