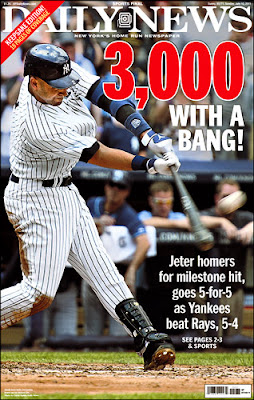 This was the Derek Jeter of the Mr. November home run swing in the Series Saturday. This was the Jeter of the flip to Jorge Posada that night against the A's in Oakland, the one who went headfirst into the stands to make that catch against the Red Sox one time. This was the Jeter who went over to Shea Stadium in the World Series and led off the game with a home run. You thought No. 3,000 would be a single for him, or a double, because he got here a single and double at a time. Only it wasn't a single or a double. It was a 3-2 pitch over the left field wall and into the hands of a kid named Christian Lopez.

The moment of Jeter's 3,000th was always going to be a great moment, especially if it came at the Stadium. And then Derek Jeter decided to knock the moment right out of the park, and then go 5-for-5 and knock in the winning run in the eighth inning on a day when the Yankees won, 5-4. And making a Saturday in July feel like October at Yankee Stadium. No. 3,000 went over the wall. No. 3,003 won the game.

Once more on this day Jeter, No. 2 of the Yankees, was the Yankee they all wanted to be. This was the flair for the dramatic that once seemed routine for him. This was part of the charmed baseball life he has led in pinstripes since he ran out to shortstop for good in 1996, the year when the Yankees became the Yankees again.

He is not Ruth or Gehrig or DiMaggio or the young Mickey Mantle, or Yogi or Mo Rivera. Just the Yankee of this time who will be remembered best. This was the kind of magic we always expected from him when he was young.

"What does 3,000 mean to me?" Reggie Jackson said Saturday near the Yankee dugout, a couple of hours before Jeter hit that pitch from David Price all the way to Christian Lopez. "It doesn't just mean you have talent. It means you have character, here or anywhere else."

Across the field, old Don Zimmer was talking about what it was like in the spring of 1996, when he and Joe Torre got their first good look at the kid from Kalamazoo, Mich.

"It was about two weeks into the spring and Joe looked out at Derek on the field one day and then looked at me and said, 'I think we found our shortstop,'" Zimmer said. "A couple of days later, though, Clyde King, who was the owner's right-hand man, said he didn't think the kid was ready. And Joe looked at Clyde and said, 'No, he goes to shortstop.'"

Saturday, Jeter went deeper into Yankee history because he went deep against Price to get to 3,000. He had just two home runs for the season. Hadn't hit a home run at the new Yankee Stadium, which sometimes seems as homer-friendly as the park where they play the Little League World Series in Williamsport, since last year. Was hitting .257 at the time. Unless you live under rocks, you know how hard people have been trying to get him out of the leadoff spot at Yankee Stadium, as if everybody has forgotten who and what he is.

But then with one swing of the bat, the Mr. November swing, the Subway Series swing from old Shea, he reminded the place Saturday of just who it was they were watching. It really wasn't supposed to be a home run. Really was supposed to be the kind of inside-out swing he used for his hit to right when he got to 4-for-4. Then Jeter showed you that he had one more swing in him like that, in this amazing Yankee life of his. He had one more moment.

"He's the professional," Johnny Damon of the Rays said outside the Tampa Bay clubhouse Saturday. Once Damon took championships away from Jeter, before joining with him to win one in 2009. "He has the respect of everybody who ever played with him, or against him. How many guys can you say that about?"

Jeter started the day at .257 and left it at .270. Five-for-five and two runs scored and two knocked in and a stolen base. Jeter was young Saturday. Nobody told him he was too old. They just came up the steps at Babe Ruth Plaza in the morning, all these No. 2 T-shirts and jerseys, white, blue and gray, to tell him what he had always meant to them and the Yankees. Maybe in a week, or two, or three, when he is struggling to get to 3,010, or 3,020, they will look to drop him in the order again.

No, he hasn't been Ruth or Gehrig or DiMaggio. But in this time in New York, and with the Yankees, Jeter has been been something more: The Yankee brand. He has been class they sell with both hands, from the moment he did run out to shortstop for good in 1996, because Joe Torre knew in the spring he had found his shortstop, told Zimmy so. No athlete has ever had this kind of class run for this long in the big city.

And in the season when he has been doubted the most, when people talk about moving him out of the leadoff spot and away from shortstop someday, in the season when he turns 37, he turns back the clock this way at Yankee Stadium. He hits that home run and then runs around the bases and into a bear hug from Posada. Mo Rivera gets him next.

Then he won't stop hitting after that. A double. Another single. Finally the single up the middle in the bottom of the eighth that knocks in Eduardo Nuñez with the winning run. Sometimes you wonder who the biggest star is in baseball these days. Saturday it was Derek Jeter. One more day like this for No. 2 at the Stadium.
Posted by jtf at 6:42 AM