No bargaining with Barack Obluffer 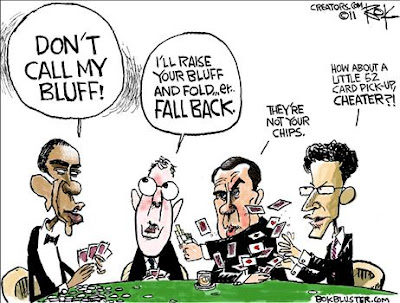 There is something surreal and unnerving about the so-called "debt ceiling" negotiations staggering on in Washington. In the real world, negotiations on an increase in one's debt limit are conducted between the borrower and the lender. Only in Washington is a debt increase negotiated between two groups of borrowers.

On the other side are the Republicans, who are the closest anybody gets to representing, albeit somewhat tentatively and less than fullthroatedly, the actual borrowers – that's to say, you and your children and grandchildren. But in essence the spenders are negotiating among themselves how much debt they're going to burden you with. It's like you and your missus announcing you've set your new credit limit at $1.3 million, and then telling the bank to send demands for repayment to Mr. and Mrs. Smith's kindergartner next door.

Nothing good is going to come from these ludicrously protracted negotiations over laughably meaningless accounting sleights-of-hand scheduled to kick in circa 2020. All the charade does is confirm to prudent analysts around the world that the depraved ruling class of the United States cannot self-correct, and, indeed, has no desire to.

When the 44th president took office, he made a decision that it was time for the already unsustainable levels of government spending finally to break the bounds of reality and frolic and gambol in the magical fairy kingdom of Spendaholica: This year, the federal government borrows 43 cents of every dollar it spends, a ratio that is unprecedented. Barack Obama would like this to be, as they say, "the new normal" – at least until that 43 cents creeps up a nickel or so, and the United States Government is spending twice as much it takes in, year in, year out, now and forever. If the Republicans refuse to go along with that, well, then the negotiations will collapse and, as he told Scott Pelley on CBS the other night, Gran'ma gets it. That monthly Social Security check? Fuhgeddabouddit. "I cannot guarantee that those checks go out on August 3rd if we haven't resolved this issue," declared the president. "Because there may simply not be the money in the coffers to do it."

But hang on. I thought the Social Security checks came out of the famous "Social Security trust fund," whose "trustees" assure us there's currently $2.6 trillion in there. Which should be enough for the Aug. 3 check run, shouldn't it? Golly, to listen to the president, you'd almost get the impression that, by the time you saw the padlock off the old Social Security lockbox, there's nothing in there but a yellowing IOU and a couple of moths. Indeed, to listen to Obama, one might easily conclude that the whole rotten stinking edifice of federal government is an accounting trick. And that can't possibly be so, can it?

For the Most Gifted Orator in Human History, the president these days speaks largely in clichés, most of which he doesn't seem to be quite on top of. "Eric, don't call my bluff," he sternly reprimanded the GOP's Eric Cantor. Usually, if you're bluffing, the trick is not to announce it upfront. But, in fact, in his threat to have Granny eating dog food by Labor Day, Obama was calling his own bluff. The giant bluff against the future that is government spending.

How many of "the wealthy" do you require to cover a one-and-a-half trillion-dollar shortfall every single year? When you need this big a fix, there aren't enough people to stick it to. "We are not broke," insists Van Jones, Obama's former "green jobs" czar and bespoke communist. "We were robbed, we were robbed. And somebody has our money!"

The somebody who has our money is the government. They waste it on self-aggrandizing ideologue nitwits like Van Jones and his "green jobs" racket. How's the "green jobs" scene in your town? Going gangbusters, is it? Every day these guys burn through so much that they can never bridge the gap. By that, I don't mean that an American government that raises two trillion but spends four trillion has outspent America, but that it's outspent the planet. In my soon-to-be-imminently-forthcoming book, I discuss a study published last year by John Kitchen of the U.S. Treasury and Menzie Chinn of the University of Wisconsin. Its very title is testament to where we're headed:

"Financing U.S. Debt: Is There Enough Money In The World – And At What Cost?"

The authors' answer is yes, technically, there is enough money in the world – in the sense that, on current projections, by 2020 all it will take to finance the Government of the United States is for the rest of the planet to be willing to sink 19 percent of its GDP into U.S. Treasury debt. Which Kitchen and Chinn say is technically doable. Yeah. In the same sense that me dating Scarlett Johannson is technically doable.

Unfortunately, neither Scarlett nor the rest of the planet is willing to do it. It's not 2020, and we're not yet asking the rest of the planet for a fifth of its GDP. But already the world is imposing its own debt ceiling. Most of the debt issued by the Treasury so far this year has been borrowed from the Federal Reserve. That adds another absurd wrinkle to the D.C. charade: Washington is negotiating with itself over how much money to lend itself.

Meanwhile, the World's Greatest Orator bemoans the "intransigence" of Republicans. OK, what's your plan? Give us one actual program you're willing to cut, right now. Oh, don't worry, says Barack Obluffer. To demonstrate how serious he is, he's offered to put on the table for fiscal year 2012 spending cuts of (stand well back now) $2 billion. That would be a lot in, say, Iceland or even Australia. Once upon a time it would have been a lot even in Washington. But today $2 billion is what the Brokest Nation in History borrows every 10 hours. In other words, in less time than he spends sitting across the table negotiating his $2 billion cut, he's already borrowed it all back. A negotiation with Obama is literally not worth the time.

In order to fund Obamacare and the other opiates of Big Government dependency, the feds need to take 25 percent of GDP, now and forever: The "new normal." It can't be done. Look around you. The new normal's already here: flat-line jobs market, negative equity, the dead parrot economy. What comes next will be profoundly abnormal. His name was Obamandias, King of Kings. Look upon his works, ye mighty, and despair. Round the decay of that colossal wreck, boundless and bare, the lone and level sands stretch far away.

Do they still teach Shelley in high school? Or just the "diversity manual" about "social justice" the Omaha Public Schools paid for with $130,000 of "stimulus" funding?