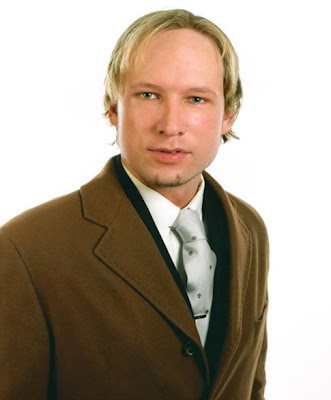 The online version of the Times, likewise, asserted (on Saturday), "Christian Extremist Is Charged in Norway."

The Times has since changed its online headline to read: "Right-Wing Extremist Is Charged in Norway." That's better, but still not quite right.
The problem is this: There is no "Christian extremist" movement in the way that there is an Islamist or "Islamic extremist" movement.
There are bad Christians, to be sure; but they have no modern-day intellectual and political movement that supports and sustains them -- modern-day Islamists, or Islamic extremists, do.
Osama bin Laden, after all, founded al-Qaeda for the express purpose of waging war against the West -- and not only the West: As we learned in Iraq, al-Qaeda militants also target and kill other Muslims who dare to dissent from its extreme and intolerant views.

Hamas and Hezbollah perform a similar role in Gaza and Lebanon, respectively. And a deep-seated hostility toward Christians and Jews is inculcated in many Islamic Madrasahs worldwide.

There is today no Christian counterpart to al-Qaeda, Hamas and Hezbollah. Despite whatever historical failings you might attribute to Christianity, there is no active "Christian extremist" movement that preaches violence against non-Christians.

In fact, quite the opposite: Christians worldwide are taught to love their (non-Christian) neighbors and to hate the sin, but love the sinner.

For example, in his 1965 "Declaration on the Relation of the Church to Non-Christian Religions"(Nostra Aetate), Pope Paul VI declared:


The Catholic Church rejects nothing that is true and holy in these [other] religions. She regards with sincere reverence those ways of conduct and of life, those precepts and teachings which, though differing in many aspects from the ones she holds and sets forth, nonetheless often reflect a ray of that Truth which enlightens all men.

Indeed, she proclaims, and ever must proclaim, Christ "the way, the truth, and the life" (John 14:6), in whom men may find the fullness of religious life, in whom God has reconciled all things to Himself.

The Church, therefore, exhorts her sons, that through dialogue and collaboration with the followers of other religions, carried out with prudence and love and in witness to the Christian faith and life, they recognize, preserve and promote the good things, spiritual and moral, as well as the socio-cultural values found among these men.

Moreover, there is no reason to think that Breivik, acted out of religious conviction or deep theological belief. What church did he belong to? Insofar as I can tell, we don't even know if he belonged to a church, let alone that he attended church. "AFacebook page and Twitter account," reports theTimes,


were set up under his name days before the rampage, suggesting a conscious effort to construct a public persona and leave a legacy for others. The Facebook page cites philosophers like Machiavelli, Kant and John Stuart Mill .

His lone Twitter post, while not calling for violence, paraphrased Mill and suggested what he saw as his will to act: "One person with a belief is equal to the force of 100,000 who have only interests."

Given the apparent influence of Mill, the Times could just as easily have written -- and with far more justification, it seems to me, since Breivik specifically referenced Mill -- "Classical Liberal Extremist is Charged in Norway."

But of course that would be ludicrous and nonsensical. Breivik's murder spree did not result from classical liberal influences any more than it resulted from Christian influences: It resulted from his own evil and twisted mind.

In fact, it would be wrong, I think, to impugnany religion and any political ideology because of Breivik's crimes. The Times now calls Breivik a "right-wing extremist," because he is politically minded and harbors extreme, "right-wing" views.

Breivik is an anti-Islam extremist. His 1,500-page manifesto, which he published online to coincide with his murder spree, calls for an "ongoing Western European cultural war" to stop "the ongoing Islamisation of Europe."

In any case, although Breivik describes himself as the "Justiciar Knight Commander for [the] Knights Templar Europe," he has no apparent ties to the "Stop Islamisation of Europe (SIOE)" movement. "He has never been in contact with us and he has never given us any advice," SIOE founder Andes Graverstold Reuters.


an SIOE member in the Faroe Islands had checked Breivik's Facebook "friends" on the social media site when he tried to join and discovered one who used a picture of Danish neo-Nazi leader Jonni Hansen as his profile picture.

"He advised us not to allow this guy to join or be able to post on the Facebook wall (message page)," said SIOE co-founder Stephen Gash.

Breivik, in fact, references numerous nationalist, anti-immigration parties as potential allies in his struggle to "defeat Islamisation [and] halt/reverse the Islamic colonization of Western Europe." But all of these parties seem to him to be insufficiently bold and courageous They seem unwilling (or unable as of now) to take the radical measures that Breivik thinks are necessary to "save Europe from Islamification."

So while Breivik clearly believes himself to be at the vanguard of a worldwide Christian (and Jewish) movement to stop Islamic "demographic warfare (indirect genocide)," he is, in truth, a politically isolated sociopath. There is no religious, intellectual and political movement that supports and sustains him.

The same thing cannot be said, unfortunately, of modern-day Islamists, who, in clear contradistinction to "Christian" and "right-wing" extremists, do have an extensive network of radical Imans, Madrasahs and extremist teachings to guide and inspire them.

So no, Breivik is not a "Christian extremist," because such an animal really doesn't exist today. Nor is he a "right-wing extremist," properly understood.

Yes, Breivik harbors extreme anti-Islam political views; but none of his apparent political and philosophical influences -- and certainly not Machiavelli, Kant and John Stuart Mill (!) -- provide him with a justification or rationalization to commit mass murder.

Breivik is an evil and vicious criminal responsible for a horrific massacre that killed more than 90 innocent men, women and children. He acted out of political motives, yes; and he is an anti-Islam extremist. But he is also a loner with no discernible political, religious and intellectual allies.

If only we could say the same about al Qaeda and other Islamists: The world, then, would be a much better, safer and far more peaceful place.

John R. Guardiano blogs at www.ResoluteCon.Com, and you can follow him on Twitter:@JohnRGuardiano.
Posted by jtf at 5:50 AM