‘Life on this planet' about to change 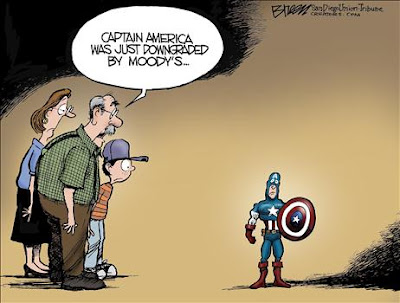 That thoughtful observer of the passing parade, Nancy Pelosi, weighed in on the "debt ceiling" negotiations the other day: "What we're trying to do is save the world from the Republican budget. We're trying to save life on this planet as we know it today."

It's always good to have things explained in terms we simpletons can understand. After a while, all the stuff about debt-to-GDP ratio and CBO alternative baseline scenarios starts to give you a bit of a headache, so we should be grateful to the House Minority Leader for putting it in layman's terms: What's at stake is "life on this planet as we know it today." So, if right now you're living anywhere in the general vicinity of this planet, it's good to know Nancy's in there pitching for you.

What about life on this planet tomorrow? How's that look if Nancy gets her way? The Democrat model of governance is to spend four trillion dollars while only collecting two trillion, borrowing the rest from tomorrow. Instead of "printing money," we're printing credit cards and preapproving our unborn grandchildren. To facilitate this proposition, Washington created its own form of fantasy accounting: "baseline budgeting," under which growth-in-government is factored in to federal bookkeeping as a permanent feature of life. As Arthur Herman of the American Enterprise Institute pointed out this week, under present rules, if the government were to announce a spending freeze – that's to say, no increases, no cuts, everything just stays exactly the same – the Congressional Budget Office would score it as a $9 trillion savings. In real-world terms, there are no "savings," and there's certainly no $9 trillion. In fact, there isn't one thin dime. But nevertheless that's how it would be measured at the CBO.

Around the world, most folks have to work harder than that to save $9 trillion. That's roughly the combined GDPs of Japan and Germany. But in America it's an accounting device. This is something to bear in mind when you're listening to the amount of "savings" touted by whatever triumphant bipartisan deal is announced at the eleventh hour in Washington.

So I find myself less interested in "life on this planet as we know it today" than in life on this planet as we're likely to know it tomorrow if Nancy Pelosi and her chums decline to re-acquaint themselves with reality. If you kinda dig life on this planet as you know it, ask yourself this: What's holding the joint up? As the old gag goes, if you owe the bank a thousand dollars, you have a problem; if you owe the bank a million dollars, the bank has a problem. If you owe the banks 15,000,000,000,000 dollars, the planet has a problem. Whatever comparisons one might make with Europe's soi-disant "PIIGS" re debt per capita or deficit-to-GDP ratio, the sheer hard numbers involved represent a threat to the planet that Portugal or Ireland does not. It also represents a threat to Americans. Three years ago, the first developed nation to hit the skids was Iceland. But, unless you're Icelandic, who cares? And, if you are Icelandic, you hunker down, readjust to straitened circumstances, and a few years down the line Iceland will still be Iceland and, if that's your bag, relatively pleasant.

That's not an option for the U.S. We are chugging a highly toxic cocktail: 21st century spendaholic government with mid-20th century assumptions about American power. After the Battle of Saratoga, Adam Smith replied to a pal despondent that the revolting colonials were going to be the ruin of Britain: "There is a great deal of ruin in a nation," said a sanguine Smith.

That's generally true. Americans of a certain bent looking at post-war France or Germany might reasonably conclude what's the big deal about genteel decline. The difference, of course, is that Europe's decline was cushioned by America. Who's around to cushion America's decline?

If the IMF is correct (a big if), China will be the planet's No. 1 economy by 2016. That means whoever's elected in November next year will be the last president of the United States to preside over the world's dominant economic power. As I point out in my rollicking new book, which will be hitting what's left of the post-Borders bookstore business any day now, this will mark the end of two centuries of Anglophone dominance – first by London, then its greatest if prodigal son. The world's economic superpower not only will be a communist dictatorship with a largely peasant population and legal, political and cultural traditions as alien to its predecessors as possible, but, even more civilizationally startling, it will be, unlike the U.S., Britain and the Dutch and Italians before them, a country that doesn't even use the Roman alphabet.

Remember the Libyan war? Oh, come on. It was in all the papers for a couple of days. And then, oddly enough, the media lost interest in Obama's war.

But it's still going on, out there on the fringes of the map. "We are generally in a stalemate," Admiral Mike Mullen, chairman of the Joint Chiefs of Staff, announced to a roomful of chirping crickets the other day. At the start of NATO's desultory bombing campaign, the French and the British were demanding that Gadhafi be removed from power, leave Libya and be put on trial at the Hague. Last week, they subtly modified their position: He can remain in Libya, but he definitely has to step down from power. Expect further modifications in their next ultimatum: He can remain in the presidential palace, but he has to move to the poky guest bedroom under the eaves.

Meanwhile, the Lockerbie bomber has been appearing at delirious pro-Gadhafi rallies. Remember the Lockerbie bomber? He was returned to Libya because he was terminally ill and only had three months to live. That was two years ago. It's amazing what getting out of the care of the Scottish National Health Service can do for your life expectancy. Likewise, back in the spring, NATO declared that Gadhafi's presidency only had three weeks to live. Like his compatriot, he seems disinclined to follow the diagnosis.

The Libyan war never caught the imagination of the American public, even though you're paying for most of it. But in Tehran and Moscow and Beijing they're following it. And they regard it as a useful preview of the post-American world. Absent American will, even a tin-pot desert drag queen can stand up to the great powers and survive. The lesson of Obama's half-hearted little war isn't lost in the chancelleries of America's enemies.

For dominant powers in decline, it starts with the money, for Washington as for London and Rome before it. But it never stops there. The horizons shrivel. Two-bit provocateurs across the map pick off remnants of the old order with ever greater ease.

America has had two roles in a so-called "globalized" world: America's government was the guarantor of global order; America's economy was the engine of global prosperity. Right now, both roles are up for grabs. And there are no takers for the former. Pace Nancy Pelosi, "life on this planet as we know it today" is going to change, and very fast.