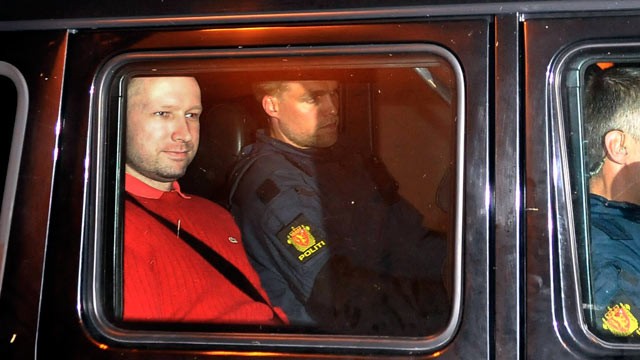 The New York Times wasted no time in jumping to conclusions about Anders Behring Breivik, the Norwegian who staged two deadly attacks in Oslo last weekend, claiming in the first two paragraphs of one story that he was a "gun-loving," "right-wing," "fundamentalist Christian," opposed to "multiculturalism."

It may as well have thrown in "Fox News-watching" and "global warming skeptic."

This was a big departure from the Times' conclusion-resisting coverage of the Fort Hood shooting suspect, Maj. Nidal Malik Hasan. Despite reports that Hasan shouted "Allahu Akbar!" as he gunned down his fellow soldiers at a military medical facility in 2009, only one of seven Times articles on Hasan so much as mentioned that he was a Muslim.

Of course, that story ran one year after Hasan's arrest, so by then, I suppose, the cat was out of the bag.

True, in one lone entry on Breivik's gaseous 1,500-page manifesto, "2083: A European Declaration of Independence," he calls himself "Christian." But unfortunately he also uses a great number of other words to describe himself, and these other words make clear that he does not mean "Christian" as most Americans understand the term. (Incidentally, he also cites The New York Times more than a half-dozen times.)

Had anyone at the Times actually read Breivik's manifesto, they would have seen that he uses the word "Christian" as a handy moniker to mean "European, non-Islamic" -- not a religious Christian or even a vague monotheist. In fact, at several points in his manifesto, Breivik stresses that he has a beef with Christians for their soft-heartedness. (I suppose that's why the Times is never worried about a "Christian backlash.")

A casual perusal of Breivik's manifesto clearly shows that he uses the word "Christian" similarly to the way some Jewish New Yorkers use it to mean "non-Jewish." In this usage, Christopher Hitchens and Madalyn Murray O'Hair are "Christians."

I told a Jewish gal trying to set me up with one of her friends once that he had to be Christian, and she exclaimed that she had the perfect guy: a secular Muslim atheist. (This was the least-popular option on the '60s board game Dream Date, by the way).

Breivik is very clear that you don't even have to believe in God to join his movement, saying in a self-interview:

Q: Do I have to believe in God or Jesus in order to become a Justiciar Knight?

A: As this is a cultural war, our definition of being a Christian does not necessarily constitute that you are required to have a personal relationship with God or Jesus.

He goes on to say that a "Christian fundamentalist theocracy" is "everything we DO NOT want," and a "secular European society" is "what we DO want."

"It is enough," Breivik says, "that you are a Christian-agnostic or a Christian-atheist." That statement doesn't even make sense in America.

At the one and only meeting of Breivik's "Knights Templar" in London in 2002, there were nine attendees, three of whom he describes as "Christian atheists" and one as a "Christian agnostic." (Another dozen people mistook it for a Renaissance Faire and were turned away.)

Breivik clearly explains that his "Knights Templar" is "not a religious organization but rather a Christian 'culturalist' military order." He even calls on the "European Jewish, Buddhist and Hindu community" to join his fight against "the Islamization of Europe."

He doesn't believe in Christianity or want anyone else to, but apparently supports celebrating Christmas simply to annoy Muslims.

Breivik says he is "not an excessively religious man," brags that he is "first and foremost a man of logic," calls himself "economically liberal" and reveres Darwinism.

But Times reporters had their "Eureka!" moment as soon as they heard Breivik used the word "Christian" someplace to identify himself. No one at the Times bothered to read Breivik's manifesto to see that he doesn't use the term the way the rest of us do. That might have interfered with the paper's obsessive Christian-bashing.

Other famous killers dubbed conservative Christians by the Times include Timothy McVeigh and Jared Loughner.

McVeigh was a pot-smoking atheist who said, "Science is my religion."

Similarly, Breivik says in his manifesto that "it is essential that science take an undisputed precedence over biblical teachings" –- a statement that would be incomprehensible to all the real scientists, such as Copernicus, Kepler, Galileo, Descartes, Bacon, Newton, Mendel, Pasteur, Planck, Einstein and Pauli, all of whom believed the whole purpose of science was to understand God.

The Tucson shooter, Jared Loughner, was lyingly described by the Times as a pro-life fanatic. Not only did more honest news outlets, such as ABC News, report exactly the opposite -- for example, how Loughner alarmed his classmates by laughing about an aborted baby in class -- but Loughner's friends described him as "left wing," "a political radical," "quite liberal" and "a pothead." Another said Loughner's mother was Jewish.

The only reason Timothy McVeigh has gone down in history as a right-wing Christian and Jared Loughner has not -- despite herculean efforts by much of the mainstream media to convince us otherwise -- is that by January 2011 when Loughner went on his murder spree, conservatives had enough media outlets to reveal the truth.

It's too bad Breivik wasn't a Muslim extremist open about his Jihadist views, because I hear the Army is looking for a new psychiatrist down at Fort Hood.