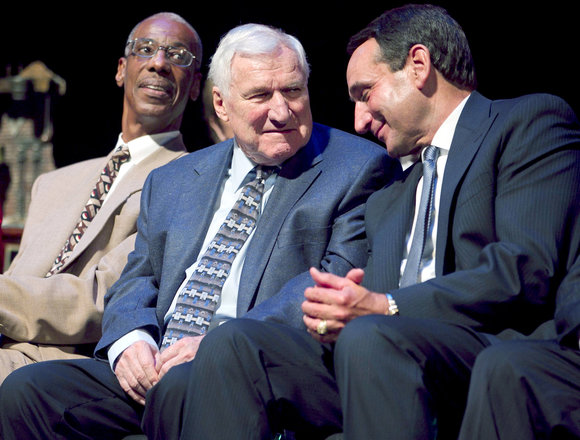 Duke coach Mike Krzyzewski, right, and former UNC coach Dean Smith share a smile. At left is Charlie Scott, who became UNC's first African-American scholarship athlete in 1966, who told the crowd that Smith made his largest impact as a teacher and person.


RALEIGH – Charles Scott woke up around sunrise Wednesday in Atlanta, his eagerness already percolating and his sense of responsibility dialed in. Just like always.

It was Scott’s honor to present Dean Smith at Wednesday night’s Naismith Good Sportsmanship Award ceremony at the Progress Energy Center’s Memorial Auditorium in downtown Raleigh. Which meant Scott wanted to be prepared and punctual.

Only when 6:45 arrived and he settled into the driver’s seat, his wife was nowhere to be found, still inside getting ready.

The former North Carolina All-American was practically crawling out of his skin, gnashing his teeth and wanting to pound the steering wheel. But, he says, many years of marriage plus an enlightening career at UNC taught him valuable lessons about patience and respect and tone.

So when his wife finally got into the car 25 minutes behind their scheduled departure time, Scott turned and delivered the sternest reprimand he could think of.

“You will never play for Coach Smith,” he said.

It’s been 41 years since Scott last played college basketball, 41 years since he was last under the direct command of Smith. But to hear him speak Wednesday, Smith’s influence still resonates daily, providing a benchmark with which to evaluate his life.

Forty-one years later and Scott still cherishes the opportunity he had to play for Smith and still finds himself not wanting to let his old coach down.

“Coach Smith was not our coach, he was our mentor,” Scott said. “He set the standard by which every day I get up I ask myself, ‘How would Coach Smith feel about what I��m doing today? Am I a good human being? Am I a good father? Am I a good neighbor? Am I compassionate?”

A TRIBUTE TO HEROES

Three Tobacco Road legends – Smith along with Duke coach Mike Krzyzewski and former N.C. State women’s coach Kay Yow – were honored Wednesday for their contributions to basketball, for succeeding at a high level and always doing it the right way. And if the 70-pound Naismith Good Sportsmanship trophy each honoree was given seemed impressive, then I don’t know how you’d even begin to describe the sincere praise heaped upon all three coaches on a goose bump-filled night.

By far, the most special moment came when Smith was officially honored, first with the presentation by Scott, and then with an emotional speech from his protégé, Roy Williams.

At 80 years old and still in a fierce battle with a cruel neurocognitive disorder, Smith attended Wednesday’s ceremony. But he was on stage for less than 10 minutes, a reminder to everyone to soak up these moments while they last.

Yet it was no surprise that even in that short amount of time on stage, Smith received a pair of standing ovations plus warm hugs from Scott and Williams and an extended ovation from Krzyzewski.

And, as you probably guessed, the stirring applause triggered that old palms-down reflex in Smith with the legendary coach gesturing for everyone in the audience to sit down and to stop brightening the spotlight.

Williams noted that while Smith is rightfully praised as an innovator, he himself has spent his entire coaching career as “a copier,” trying desperately to emulate everything Smith ever did.

“The dogs may bark but the caravan rolls on.”

“Life can be understood backwards but it must be lived forwards,” Williams said.

With a crack in his voice, he explained why those maxims resonated.

Krzyzewski, too, felt a profound appreciation for Wednesday night’s event and valued the opportunity to spend time with Smith, against whom he battled for 17 years in the ACC. Before the night’s ceremony began, Krzyzewski visited briefly with Smith in the green room.

Later, on stage, Coach K looked around at an array of Smith’s former UNC players – from Phil Ford to Eric Montross, Rusty Clark to Al Wood, Dave Hanners to Dennis Wuycik – and let the admiration they have for Smith wash over him.

“Dean set the standard for basketball – and not just college basketball – that everyone is still trying to reach,” Krzyzewski said. “He demanded that his teams play as one. And what he got in return from all these guys who played for him was the intense loyalty that they feel toward him. And that’s something I’ve admired since I started coaching. It’s really one of the great things in all of sport: that intense loyalty the Tar Heel players have for Coach Smith.”

Smith has never needed nor wanted the commendation. But you can be certain he’ll forever be proud of that loyalty and what it has meant in building and elevating the North Carolina basketball program.

Yet for Smith, this was always about more than basketball. He wanted to impart wisdom and teach life lessons to his players. And you can bet that Charles Scott wasn’t the only one who woke up Wednesday measuring himself by the values Smith instilled.

Staff writer Dan Wiederer can be reached at wiedererd@fayobserver.com or 486-3536.