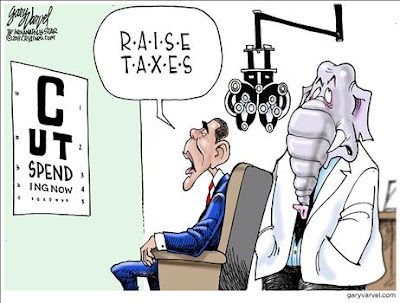 President Obama’s core message in his Wednesday press conference, his first since March, could be found in his advice to Republicans. “You go talk to your constituents and ask them, ‘Are you willing to compromise your kids’ safety so some corporate-jet owner can get a tax break?’”

This was just one of six shots the president took at corporate-jet owners. A novice might be forgiven for thinking that the president really doesn’t like corporate jets or that the Republicans cared so much about the darn things that they had proposed crossing out “arms” in the Second Amendment and replacing it with “corporate jets.” Where’s Charlton Heston to proclaim, “From my cold dead hands you can have my Learjet 85 . . . ”?

A novice might also think that tax status of corporate jets is of disproportionate significance in how to move this country toward a balanced budget.

But the novice would be wrong. For starters, Obama’s most recent budget calls for adding $9.5 trillion in new debt over the next decade. If you got rid of the “accelerated depreciation” of corporate jets, Reuters economics columnist James Pethokoukis calculates, it would save a whopping .03 percent of that total.

Sadly, the room was full of journalists who do not consider themselves novices but who nonetheless let Obama get away with this demagogic dishonesty. No one asked the president why he suddenly cares so much about getting rid of a tax break he himself was for before he was against it. Indeed, no one asked why, if it is such an affront to the liberal conscience, it was part of Obama’s stimulus bill, which was passed without any Republican votes in the House and only three in the Senate (which means Nancy Pelosi voted for special tax breaks for corporate jets and the GOP didn’t).

More broadly, no one threw a flag on his claim that “every single observer who’s not an elected official, who’s not a politician,” agrees with him on the burning need to raise taxes as part of any budget deal. This is a good example of Obama’s most grating tic, his need to claim that all reasonable and serious people agree with him and anyone who disagrees must be doing so for base or ideological motives.

No one queried why he talks about the need to raise taxes on “millionaires and billionaires” but the fine print of his proposals defines millionaires and billionaires as people who make $200,000 a year as individuals or $250,000 as joint-filing couples. Jay Duckson at Central Business Jets tells the Wall Street Journal that the starting price for a private jet is $10 million dollars. Annual upkeep and fuel is about $500,000. You do the math.

This points to what is most offensive about Obama’s focus-grouped class-warfare rhetoric: the total incoherence of the underlying policies.

The day before his press conference, Obama was in Bettendorf, Iowa, at the Alcoa Davenport Works plant to highlight his economic vision for manufacturing. “Alcoa is showing us the future we can build here in eastern Iowa and across the country,” he proclaimed.

“The idea is to create jobs now, and to make sure America stays on the cutting edge of manufacturing for years to come,” Obama declared.

The factory Obama visited, however, isn’t a generic aluminum plant. It is, according to Alcoa, the “premier aerospace supply plant and is today the hub of Alcoa’s $3 billion aerospace business.”

That includes the general aviation industry, which is centered in Wichita, Kan., where they make private jets “right here in America” as Obama likes to say. The upshot: Obama says that Alcoa must lose business among American customers to repeal a tax break Obama and the Democrats supported because Republicans want to balance the budget.

To be fair, Alcoa’s biggest customers aren’t manufacturers of private jets but the big manufacturers of commercial jets — you know, like Boeing. Well, that company is being told by Obama’s union-hack-packed National Labor Relations Board that it cannot open a new manufacturing plant in South Carolina, because to do so would offend Obama’s beloved unions in Washington State.

The point isn’t that there’s no merit to any of Obama’s positions (personally, I’m all for clearing the junk out of the tax code). The point is that at this point merit simply has nothing to do with the positions Obama takes.

— Jonah Goldberg is editor-at-large of National Review Online and a visiting fellow at the American Enterprise Institute. You can write to him by e-mail at JonahsColumn@aol.com, or via Twitter @JonahNRO. © 2011 Tribune Media Services, Inc.
Posted by jtf at 6:41 AM