Egypt Rushes Toward Sharia and War 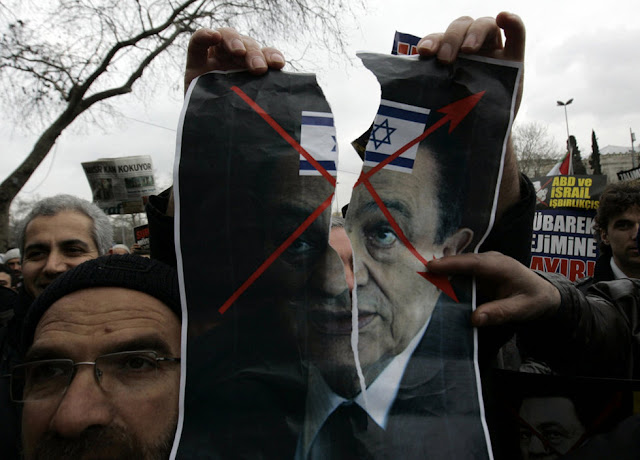 A man tears up a poster of Egyptian President Hosni Mubarak as several hundred pro-Islamic demonstrators hold a protest in show of solidarity with protestors in Egypt, after Friday prayers outside the Beyazit Mosque in Istanbul, Turkey, Friday, Feb. 4, 2011.(AP Photo/Ibrahim Usta)

How hopelessly at odds with America’s best interests is Barack Obama? Less than two weeks ago he declared his support for “political and economic reform in the Middle East,” warmly endorsing the “Arab Spring” uprisings there. Then Sunday, Muslim Brotherhood Sheikh Hazem Abu Ismail announced his candidacy for the presidency of Egypt, promising to transform Egypt into an Islamic state and go to war with Israel. Reform that would indeed be, but not the kind any American president should be applauding.

Maybe Obama is still listening to his ruinously incompetent Director of National Intelligence, James Clapper, who at the height of the Egyptian uprising characterized the Muslim Brotherhood as “largely secular.” Secular they’re not, but they’re certainly influential, and Obama knows it: he specifically requested that Muslim Brotherhood representatives attend his speech in Cairo in June 2009. Speaking in a mosque on Saturday, Abu Ismail said that he was confident of victory -- precisely because, unlike the other candidates, he presented a clear call to institute Islamic law in Egypt. “Mohamed ElBaradei, Amr Moussa, and Hamdeen Sabahi, the liberal candidates, will be unable to present a clear vision.”

Abu Ismail was sure all Egyptians would love his pro-Sharia platform: “If I could apply sharia in Egypt, all people, including non-Muslims, would applaud me four years later.” He dismissed all who opposed him as perverts and libertines: “We seek to apply Islamic law, but those who don’t want it prefer cabarets, alcohol, dancers and prostitution, as the implementation of Islamic law will prohibit women to appear naked in movies and on beaches.”

He also promised to go to war with Israel: “The Camp David peace treaty is insulting to the Egyptian people, so it must be canceled, and I will do my best to convince people to cancel it.” Abu Ismail made this pledge as Egypt reopened the Rafah crossing -- the only official point of entry into Gaza other than from inside Israel. Egypt had closed it in 2007 after Hamas took power in Gaza, as part of its uneasy observance of the Camp David Accords, since the Rafah crossing had been an easy route into Israel for jihadis and their weapons suppliers.

But now it appears that peace with Israel is no longer such a high priority. And it is no wonder that Abu Ismail thinks ripping up the Camp David accords is a winning issue. Last week the Tunisian Muslim Brotherhood leader Rachid Ghannouchi predicted that the “Arab Spring” would lead to the destruction of Israel. Clearly he knows the direction of events in Egypt: man-on-the-street interviews conducted during the Egyptian uprisings found ordinary Egyptians explaining that they hated Mubarak was that he maintained peace with Israel. “He is supporting Israel. Israel is our enemy,” protestors explained. “If people are free in Egypt...they gonna destroy Israel.” Many demonstrators carried posters of Mubarak with a Star of David drawn on his forehead.

In January, Mohamed Ghanem, another Muslim Brotherhood leader, said in an interview on Iran’s Al-Alam television station that Egypt should prepare to go to war with Israel. That same month, Iran’s Press TV interviewed an Egyptian international lawyer Marwan al-Ashaal, who explained the popular discontent with Mubarak as a direct consequence of his keeping the peace with Israel: “The American-Egyptian relationships were based on Israeli security and I think Mubarak has been very dedicated to Israeli security more even than to his own people's security or the national interests.” Al-Ashaal claimed that “we see the deals with Israel that provoked people and took them to the edge.” He declared that Egypt is “never going to be a friend of Israel.”

Whether or not Abu Ismail is elected President of Egypt, the opening of the Rafah crossing indicates that Egypt has decided to adopt a belligerent stance toward Israel, and more is certain to come as Egypt marches toward Sharia. Obama in his recent Mideast policy speech proclaimed his ardent support for “free speech, the freedom of peaceful assembly, the freedom of religion, equality for men and women under the rule of law.” There is, however, no indication that the revolutions in the Middle East will lead to regimes that will have any interest in protecting any of those rights.

Hazem Abu Ismail’s presidential campaign in Egypt is just the latest indication that when it comes to analyzing the “Arab Spring,” the Obama Administration is engaged yet again in fantasy-based policymaking.

Mr. Spencer is director of Jihad Watch and author of The Politically Incorrect Guide to Islam (and the Crusades), The Truth About Muhammad, Stealth Jihad and The Complete Infidel's Guide to the Koran (all from Regnery-a HUMAN EVENTS sister company).
Posted by jtf at 8:04 AM

This is an absurd title change, the MB already has people who are running, Abu stands for Sharia law, and has stated as such, and as he says, he stands for something..... "change".....