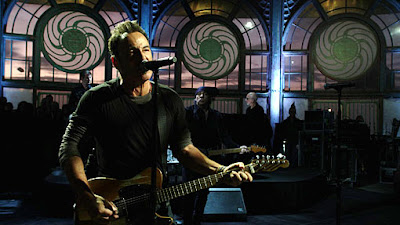 When New Jersey's Republican governor, Chris Christie, was sworn into office, he chose to celebrate at his inauguration by joining a Bruce Springsteen cover band in singing the Boss' signature anthem, 'Born to Run'. Governor Christie hails from Bruce's home state of New Jersey, and his zealous Springsteen fandom is perhaps unusually dedicated for a politician. But it also symbolizes a paradox: while Springsteen has long been open about his left-wing political views and has hit the campaign trail for the last two Democratic presidential candidates, he remains enduringly popular with a broad segment of conservatives and Republicans. In part, that's for the obvious reason: Bruce is a rock legend with a ton of fans, so we should be unsurprised that he would have fans of every political persuasion. It's also partly demographic; Bruce's fans tend to be disproportionately white and, increasingly, older, and those are more conservative groups than the population at large. But my own anecdotal sense is that Bruce's fanbase is - if anything - more conservative-leaning than you would explain by those factors alone, and certainly not markedly more liberal. Speaking as a conservative and a longtime Springsteen diehard, let me offer some theories as to why that is. This is not an essay dedicated to claiming Springsteen for the Right, or arguing that he's unwittingly some sort of crypto-conservative, although I do note at a few points conservative themes in his writing and his life. Rather, my argument is that the things that appeal to fans of Bruce Springsteen and his music are, quite logically, most appealing to conservatives.

Generally, we conservatives have pretty low expectations, politically, for our pop-culture icons. We understand that most of them don't agree with us on politics or policy. So, what we look for are artists who have some tolerance and respect for us, some themes in common with our worldview, and sometimes being one of the good guys on something. Bruce delivers on all counts.

One of the principal complaints of conservatives about the culture is that it's a sewer of indecency: too much sex, too much bad language, too much immorality of various kinds...in general, too much bombardment of the young and the unwilling with messages and imagery that subvert any effort to bring kids to maturity gradually, with the perspective of time.

Bruce may be a liberal, but on this count, he's been one of the good guys for a very long time. People bring their kids to Springsteen concerts and play his albums in the car without worry; out of his vast catalog, I can count on one hand the number of Springsteen songs I have to censor from my kids, and none of them are his major hits (on Live in Dublin, you can hear an audible crowd reaction to the line in 'Long Time Coming' where Bruce uses the F word). Bruce deals in adult themes without forcing his listeners into adulthood. Contrast this to a self-identified Republican like Britney Spears, who launched her career as an icon of underage sexuality, sings about threesomes and has presented an ongoing reality-show-style trainwreck of a life offstage.

In his personal life, Bruce is no perfect role model, but by and large he's avoided the public spectacle of a life of rock n' roll dissolution; he's raised a family (his first marriage collapsed quickly, but the second one has endured two decades), stayed out of trouble with the law, kept any tales of excess and vice out of the press. Clarence Clemons, in his book Big Man - which I highly recommend - recounts that Bruce had a "no drugs" policy for his band, more out of professionalism than anything else; while Clarence admits to violating this policy rather regularly, he nonetheless respected the fact that Bruce sought to hold himself and his band to some standards, if for no other reason than to keep the band from unraveling. (TIME's famous 1975 profile of Bruce noted his avoidance of drugs, an unusual stance in the 70s, a decade before Nancy Reagan's "Just Say No" campaign).

Read the entire article by clicking on the link below: