BCS title game crowns a champion of a fraudulent system 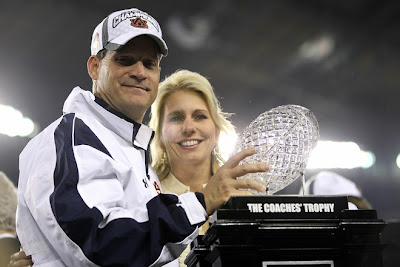 GLENDALE, AZ - JANUARY 10: Head coach Gene Chizik of the Auburn Tigers celebrates the Tigers 22-19 victory as he holds up the Coaches Trophy after defeating the Oregon Ducks during the Tostitos BCS National Championship Game at University of Phoenix Stadium on January 10, 2011 in Glendale, Arizona. (Photo by Ronald Martinez/Getty Images)


What a dubious honor for Oregon and Auburn to meet in that game that ought to be known as the BS Bowl. The Tigers are champions of what, exactly? Of an illegitimate system in which nearly the half the top-level college football teams in the country were excluded before the first kickoff ever went up.

Since 2004, nine undefeated teams have been denied chances to play for the college football national championship, thanks to the current Bowl Championship Series scheme, because they don't play in the right conferences. Yeah, it's a regular meritocracy, all right.

It's a system in which fraternal preference trumps excellence, and a half-dozen elites control the market, the profits, and the access, via a double-super-secret poll formula that no one can understand without a special decoder ring. It's a through-the-looking-glass world in which U-Conn., an 8-4 patsy that got stomped by four unranked teams this season, can get a berth in the Fiesta Bowl. Meantime Boise State, a team that lost just once, to a ranked team on a field goal in overtime, gets left out of the major bowls altogether. It's a system that says to undefeated Texas Christian and all the other teams like it, which don't belong to the privileged club: "No matter what you did all season, it was never going to matter in the competitive sense. Your fate was outside of your hands."

The BCS has taken the essential principle of competition - that those who perform best should be acknowledged and rewarded - and replaced it with a caste system. We would find this detestable in any other aspect of society, yet it's somehow tolerated in college football, because we think it's too trivial for governmental action, and because the cartel called the BCS sells us speciously on the "tradition" of the bowl system. In fact, it's just old-fashioned plantation economics: The Boise States and TCUs are three-fifths citizens in the sport they play.

This past week the Department of Justice received a 28-page analysis of the BCS from the Washington law firm Arent Fox, which is representing Boise State and the Mountain West Conference in their quest for reform of the postseason system. Written by attorney Alan Fishel, it's entitled "22 Tall Tales of the BCS." The DOJ is conducting an ongoing review of the bowl scheme, with an eye toward whether it's in violation of antitrust laws. Fishel contends that it is, and more.

"It's illegal, indefensible, unconscionable, and completely at odds with the values that higher education seeks to promote," he says.

In his analysis, Fishel offers several facts that observers of college football may not know, thanks to BCS officials' talent for coverup and misinformation. For instance, the BCS likes to insist that bowl profits are distributed equitably.

Did you know: Under the BCS scheme, each year the six automatic-qualifier conferences will receive - at a minimum - $10 million more in revenue than the non-automatic-qualifier conferences, regardless of who performs better. This discrimination will occur no matter what the rankings, or the records. This year the Big East, which had not a single team ranked in the top 20, will receive at least $21 million. The Mountain West, which had two teams ranked in the top 20, including unbeaten No.3 TCU, will receive only half that.

A common BCS defense is, "Nobody wants to see the smaller schools like TCU and Boise State. There's not as much interest in them." Really? Was U-Conn. a better television draw?

Did you know: The regular season game between Boise State and Virginia Tech had the second-highest ratings of any game this year, including conference championships. And aside from the interest thing not being, you know, true, there's also this rebuttal: Would last year's NCAA basketball tournament final have been better without Butler?

The BCS's entire reason for being rests on its contention that it produces the best championship matchup every year. It argues that it puts the two most powerful and deserving teams in the title game.

But did you know: The so-called favorites hardly ever win the title, in most sports. The BCS system, which so badly skews the championship game toward the alleged power conferences, is actually anti-competitive. Since 1998, the national champions in NCAA baseball and basketball have come from the top two seeds in just four of 13 years, a third of the time.

There is no reason to believe football would be any different if the champion was legitimately decided on the field. Did you know: The old bowl system was far more equitable and outsiders had a better shot at a championship. In seven of the 10 years immediately preceding the creation of the BCS in 1998, the national title was claimed by teams outside of the power conferences. Including Miami, which was then an independent.

The BCS is getting it wrong most of the time.

The BCS also loves to argue that it's simply the result of a free-market system. Actually, it flies in the face of market forces.

So did the MWC and WAC receive more money for that performance? Not under the BCS. Instead they received about half of what the ACC and Big East got.

"How exactly has the market demanded this system?" Fishel asks.

And how is such discrimination necessary in shaping a national championship game? If the North Carolina Tar Heels were eliminated from winning an NCAA basketball title before the season began, would we tolerate it? If the Red Sox were eliminated from the pennant race before the season began, wouldn't we consider the Red Sox and their fans "harmed" by such a system?

We'll have a true national championship game on the day that the BCS invites unrestricted competition, instead of eliminating half the competition. Until then, no team can claim a real victory.
Posted by jtf at 5:04 PM