The Chicago Way rolls on at the White House

Chief of staff pick just another cog in the Daley machine 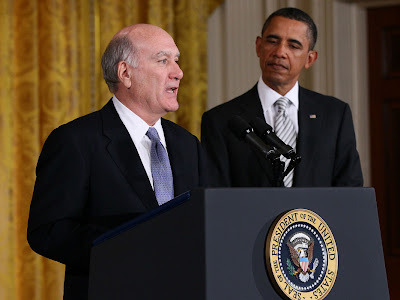 As President Barack Obama knighted Chicago's William Daley as his new chief of staff — and kept the Daley machine in control of the executive branch of our federal government — I couldn't help thinking of the good old days.

Back when I would fondly recount the legend of Obama of Chicago.

Not the political spin that Obama was some kind of reformer promising a different, cleaner kind of politics. But the true mythic history, Obama as a thin, silky creature of the Daleys, eagerly trotting behind them along the Chicago Way:

And lo, the Daley women found the infant Barack floating in a reed basket along the banks of the Chicago River. And they lifted the crying babe from the river, and nurtured and wrapped him in swaddling clothes. They watched him grow to manhood, where he performed great miracles.

Soon he was ready to transcend the broken politics of the past, just as long as it was in Washington, and not in Chicago, where the Daleys eat and play.

Watching Billy and Barack do their thing Thursday, I developed a strange urge to sit in a great leather wing chair, put my feet up on an ottoman, pour out a fistful of 18-year-old single-malt scotch, and light a big maduro cigar.

"He possesses a deep understanding of how jobs are created and how to grow our economy," said Obama. "And, needless to say, Bill also has a smidgen of awareness of how our system of government and politics works. You might say it is a genetic trait."

Pardon me, Mr. President, but it's not a trait, exactly. It's more like a reason for being.

Not everyone was amused. Bill's brother, Mayor Richard Daley, became upset when pesky reporters dared ask him whether Bill's ascendency smacked of "the Chicago Way."

They suggested to the mayor that "the Chicago Way" carried a negative connotation. He just hates that.

"What do you mean, negative?" the mayor sneered. "Go to New York. Go to Washington. Go to Texas. Go to California. What 'Way'?' This is all your writing."

Thanks for being a loyal reader, Mayor Daley.

Yet what is truly amusing about the Bill Daley story is the reaction of the Washington media.

They seem quite desperate to paint the Billy appointment as something it is not. They want it to be a symbolic move, one of Daley bringing Obama closer to the political center.

It's a neat construction, quite explainable and reasonable, the kind of thing spinners put together and feed feeble-minded reporters on background, so that a favorable consensus may be reached.

And once a consensus is reached, those who adopt it become zealots intent on hunting down the stray heretics. 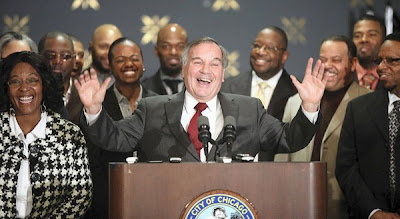 "Using Chicago's early history as bare-knuckled politics and back-room dealmaking is a favored tactic among those outside the region seeking to tarnish the reputations of local Illinois political leaders who rise to the national stage," admonished the Christian Science Monitor, offering up my column as evidence of such heresy.

Early history? You mean like Thursday, when the federal grand jury indicted the former business partner of the mayor's son over that city sewer contract deal?

The Daley boys are adept and skillful and ruthless in the pursuit of power and treasure. The family has controlled Chicago and Cook County for more than half a century. The Daleys are without doubt the best politicians on the planet.

Obama knows this. And because he wants to get re-elected in 2012, he'll keep the Daleys around him.

The mayor's mouthpiece, media merlin David Axelrod, once again will be shaping Obama's message and image for the campaign. And Billy and Rich are easing former Obama chief of staff Rahm Emanuel into the mayor's job.

Yet what's often left out of the official account of the Billy ascendency is his role as media manager. For decades now, Billy's been playing the role of background source to many establishment media types.

It's a role he might well continue to play even as Obama's major-domo.

A politician acting as a reliable source over years gets a break. And given the early coverage — and the beltway media's historic reluctance to let readers in on the political back story of those who move to Washington — it looks like Billy will be getting a break for quite some time.

Washington reporters hoping to maintain favor with the Chicago gatekeeper would be advised to stay away from the following topics while researching the glowing puff pieces to come.

Don't ask about Billy at Fannie Mae and his little buddy Rahm at Freddie Mac in the 1990s, or how that huge SBC deal went through in Illinois in 2003 when Billy was SBC president.

Don't ask about those meetings back in Chicago, in the early 1990s, when Billy and family adviser Tim Degnan and others helped create those City Hall patronage armies — which were later involved in illegal hiring — to keep Rich Daley in power and elect allies like Emanuel to Congress.

And for Pete's sake, never ask about the Chicago Way.

Just stick to the script as Obama begins the 2012 campaign with Billy and Dave and Rahm and Rich behind him.

jskass@tribune.com
Posted by jtf at 6:18 PM