Look for Terrorists, Not Weapons 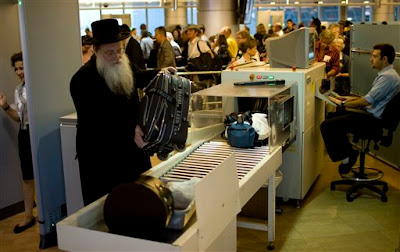 My reaction at the time was: You mean you weren’t already doing that? Apparently not. When underwear bomber Umar Farouk Abdulmutallab traveled from Nigeria to Detroit without baggage (it was reported at the time that he had purchased a one-way ticket, but that proved to be incorrect), he sailed through routine screening — despite a warning from his father to authorities that Umar had been radicalized.

After 9/11, we were all under the impression that the newly created TSA, and its counterparts in other Western countries, would be particularly alert for certain kinds of behavior. Purchasing a one-way ticket, paying cash, having little or no luggage, looking nervous, and traveling from certain unstable parts of the world were all presumed to be red flags that would trigger action. Instead, we seem to have settled into a kind of bovine, tedious hunt for weapons. We screen everyone for guns, knives, scissors, nail clippers, tweezers (yes, I lost a good pair in November 2001), and now also shoe bombs and liquids and gels. In short, we look for weapons, not terrorists.

Defenders of the system — Bush-era Homeland Security officials as well as the current crop — argue that these irritating procedures, and now the body scans and distasteful, intimate pat-downs, are the only way to keep us safe.

Critics from the right believe that if we would only drop our political correctness and aggressively profile Muslim-looking men between the ages of 18 and 40, we would solve the problem.

I’d be for profiling of that sort — despite the civil-liberties cost — if I thought it would work. But I’m not convinced.

Colleen Renee LaRose, a.k.a Jihad Jane, and Jamie Paulin-Ramirez were both blond, blue-eyed American converts to Islam who were arrested in October 2009 in Ireland and charged with plotting to kill a Swedish cartoonist who had drawn Muhammad’s head on the body of a dog.

In 1972, members of the Japanese Red Army opened fire in Tel Aviv’s airport, killing 24 people. In 1986, a pregnant Irish woman was attempting to fly from Heathrow to Tel Aviv. A check of her luggage revealed that her fiancé, a Palestinian, had planted Semtex explosives in her carry-on bag. If not discovered, they would have brought down the plane. In the early 1980s, a German national recently released from prison was befriended by Palestinians. His new friends bought him an airline ticket to Tel Aviv. He thought he was smuggling drugs. But in fact, his bags contained ten pounds of explosives.

Yes, most aspiring airline bombers are young Muslim men. But not all of them are from the 14 countries listed by the Obama administration. Richard Reid was British. Zacarias Moussaoui was French. One of the terrorists who hijacked an Air France jet in the 1970s on behalf of the Palestinians was a German woman. The suicide bombers who struck the Moscow subway in March were women. And women suicide bombers have struck at checkpoints in the West Bank.

Israeli security succeeds by questioning every passenger. What is the purpose of your trip? Who packed your bags? Where will you be staying? The security agents are all army veterans (well, nearly everyone in Israel is), have college degrees, and are fired immediately if they make a mistake. They learn psychological profiles of terrorists as well as how to detect things — like the Irish lady traveling to meet her fiancé’s family without him. That don’t smell right.

While it’s true that Israel has about 1/60th of the air traffic that we do, and it may not be feasible to undertake exactly that kind of examination in our country, we could at least attempt to apply the principle: looking for terrorists rather than weapons. How much longer would it take to ask each passenger a few questions than it does to put them all through the full-body scanner or subject them to a pat-down? Some travelers will be questioned more extensively, but on balance, it probably wouldn’t add any time to the average trip and might even speed it up. And the invasion of privacy would be much less offensive.

— Mona Charen is a nationally syndicated columnist. © 2010 Creators Syndicate, Inc.
Posted by jtf at 8:25 AM