The Irrelevance of START

It ignores the real nuclear danger.

It’s a lame-duck session. Time is running out. Unemployment is high, the economy is dangerously weak, and, with five weeks to go, no one knows what tax they’ll be paying on everything from income to dividends to death when the current rates expire Jan. 1. And what is the president demanding that Congress pass as “a top priority”? To what did he devote his latest weekly radio address? Ratification of his New START treaty.

Good grief. Even among national-security concerns, New START is way down at the bottom of the list. From the naval treaties of the 1920s to this day, arms control has oscillated between mere symbolism at its best to major harm at its worst, with general uselessness being the norm.

The reason is obvious. The problem is never the weapon; it is the nature of the regime controlling the weapon. That’s why no one stays up nights worrying about British nukes, while everyone worries about Iranian nukes. 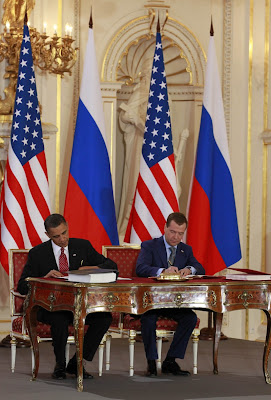 In Soviet days, arms control at least could be justified as giving us something to talk about when there was nothing else to talk about, symbolically relieving tensions between mortal enemies. It could be argued that it at least had a soporific and therapeutic effect in the age of “the balance of terror.”

But in post-Soviet days? The Russians are no longer an existential threat. A nuclear exchange between Washington and Moscow is inconceivable. What difference does it make how many nukes Russia builds? If they want to spend themselves into penury creating a bloated nuclear arsenal, be our guest.

President Obama insists that New START is important as a step toward his dream of a nuclear-free world. Where does one begin? A world without nukes would be the ultimate nightmare. We voluntarily disarm while the world’s rogues and psychopaths develop nukes in secret. Just last week we found out about a hidden, unknown, highly advanced North Korean uranium-enrichment facility. An ostensibly nuclear-free world would place these weapons in the hands of radical regimes that would not hesitate to use them — against a civilized world that would have given up its deterrent.

Moreover, Obama’s idea that the great powers must reduce their weapons to set a moral example for the rest of the world to disarm is simply childish. Does anyone seriously believe that the mullahs in Iran or the thugs in Pyongyang will in any way be deflected from their pursuit of nukes by a reduction in the U.S. arsenal?

Obama’s New START treaty, like the rest, is 90 percent useless and 10 percent problematic. One difficulty is that it restricts the number of delivery vehicles for nuclear weapons. But because some of these are dual-use, our ability to deliver long-range conventional weapons, a major U.S. strategic advantage, is constrained.

The second problem is the recurrence of language in the treaty preamble linking offensive to defensive nuclear weaponry. We have a huge lead over the rest of the world in anti-missile defenses. Ever since the Reagan days, the Russians have been determined to undo this advantage. The New START treaty affirms the “interrelationship” between offense and defense. And Russian president Dmitry Medvedev has insisted that “the unchangeability of circumstances” — translation: no major advances in U.S. anti-missile deployment — is a condition of the entire treaty.

The worst thing about this treaty, however, is that it is simply a distraction. It gives the illusion of doing something about nuclear danger by addressing a non-problem, Russia, while doing nothing about the real problem — Iran and North Korea. The utter irrelevance of New START to nuclear safety was dramatically underscored last week by the revelation of that North Korean uranium-enrichment plant, built with such sophistication that it left the former head of the Los Alamos National Laboratory “stunned.” It could become the ultimate proliferation factory. Pyongyang is already a serial proliferator. It has nothing else to sell. Iran, Syria, and al-Qaeda have the money to buy.

Iran’s Islamic Republic lives to bring down the Great Satan. North Korea, nuclear-armed and in a succession crisis, has just shelled South Korean territory for the first time since the Korean armistice. Obama peddling New START is the guy looking for his wallet under the lamppost because that’s where the light is good — even though he lost the wallet on the other side of town.