Following the embarrassment of having recommended Spain's failed "green" programs, Obama switched to using Denmark as a model. Best out of five?

President Obama was caught flatfooted by the embarrassing truth about Spain’s “green economy” after he instructed us — on eight separate occasions — to “think about what’s happening in countries like Spain” as a model for a U.S. future. Spain, of course, is suffering an economic meltdown from enormous public debt incurred through programs like a mandated “green economy.”

But Obama also just implored Spain to drastically scale back or risk becoming Greece. A flip he immediately flopped, by pushing hard to enact the Kerry-Lieberman “path to insolvency” bill based on … Spain. (Cue Benny Hill theme.)

So, embarrassed — or perhaps shameless — Obama changed his pitch:
“Think about what’s happening in countries like Denmark.”

Of course, the experience of Denmark — a country with a population half that of Manhattan’s, not exactly a useful energy model for our rather different economy and society — is no great shakes, either.

But it gets better.

In my new book — Power Grab: How Obama’s Green Policies Will Steal Your Freedom and Bankrupt America — I describe the absurdity of the “free ice cream” theories of the “green economy” our statist friends now embrace as their latest raison d’etre for a controlled society. My mother-in-law — visiting from Denmark — is reading my book with a particular interest in its exposé of what her heavily taxed labor pays for in that country. 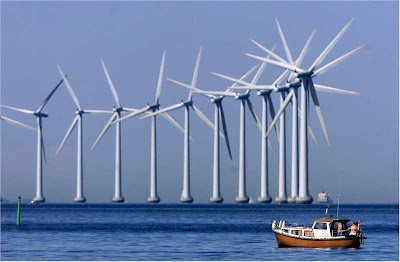 The book also prompted her to relay an amazing new anecdote to the case study referred to by the Danes as “the fairy tale of the windmills.”

In the northern region of Jutland called Thy, Denmark is forcing people off of their land (“Kelo” is apparently Danish for “Kelo”) and — wait for it — preparing to clear-cut fifteen square kilometers of forest, and eventually thirty, in order to put up more of the bird- and job-killing monstrosities.

These giant windmills are not even intended to fill an energy gap for the Danish economy. No, they are to be onshore experimental versions of massive new off-shore turbines — with the facility to be rented out to wind mavens like Siemens.

The argument they are forwarding for doing this is not just the typically risible claim that this is necessary for the environment. After all, “[the] deforestation will create an increase of 400,000 tons of CO2 emissions, the equivalent of the CO2 emissions of 100,000 people per year.”

They are also forwarding the argument that this must occur in order to create Danish jobs.

Of course, “creating jobs,” to the extent such mandates can do this (as they are typically net job killers), appears much more necessary after the state first made it difficult for the private sector to do such things. Denmark enforced what methods, and what quantity of those methods, are acceptable for producing electricity. It always turns out that the acceptable ways are inefficient, intermittent, and expensive. Which sort of explains the need for mandates.

Employers, who pass taxes and other costs along until they can’t, leave for less inane political and economic environments. Like Kentucky, for example, as I detail in Power Grab.

So, yes, President Obama, let’s think of what’s happening in these European countries.

For the moment, put aside the spectacular irony of what the “green” agenda necessitates well before reaching its logical conclusion. There is a more important lesson here, as our policy sages in Washington seek to cram through a replica of Europe’s social democracy here before November, when voters get to weigh in on this form of “change.”

The key lesson to be learned from Spain: these glorified make-work schemes, which saddle the economy with boondoggles of massive physical redundancies, inherently create “bubbles.” The bubbles exist solely because of wealth transfers from taxpayers — meaning from productive uses to intrinsically uneconomic ones (again, they have to be mandated and subsidized to exist).

The bubbles only avoid bursting with constant infusions of redistributed taxpayer wealth. But simply existing is not politically tolerable to the constituencies that politicians create with the subsidy and mandate schemes. There is a reason that GE’s Washington lobbying budget tops that of all of Big Oil … combined. Once a “market” is created by government fiat, recipients of the largess pour tremendous resources into keeping the gravy train rolling, and gaining steam.

This is just what happened in Spain, where the public deficit threatened an economic default.

And in Denmark, where the politicians look to clear every inch of land they can find — even if it happens to be occupied or forested — to put up more windmills in the name of “creating jobs.”

We have learned from Obama’s models in Spain and Denmark (and also Germany) that no net jobs are — or can be — created by these financial rat holes. Opportunity costs and direct jobs lost due to the economic pain caused by higher energy prices and other restrictions on individual liberty harm the economy as a whole. And what the economy gets in return are temporary jobs requiring more debt — which means taxes.

The schemes drain the public treasury, passing off your hard-earned money to entrenched interests. And, now, they lead to clear-cutting forests and “takings.”

In a way — a particular way known mostly to Washington, but apparently also everywhere else the “market socialists” rule — it just makes sense.

- Christopher Horner is a senior fellow at the Competitive Enterprise Institute, and author of the recently-published Power Grab: How Obama’s Green Policies Will Steal Your Freedom and Bankrupt America.
Posted by jtf at 9:35 AM

Yet another example of a caveman-intelligence. Go find yourself a life!