Character won him the nomination. Now a lack of it has him in hot water.

Rep. Joe Sestak, a retired three-star admiral and former Clinton White House aide, earned the Senate nod from Pennsylvania Democrats last week by playing up his integrity. He reckoned that if voters saw him as an independent, Kennedy-quoting “vision guy,” as their upright neighbor, then he’d be able to defeat Sen. Arlen Specter, the 80-year-old incumbent. The strategy worked: Sestak won 54 percent of the vote. 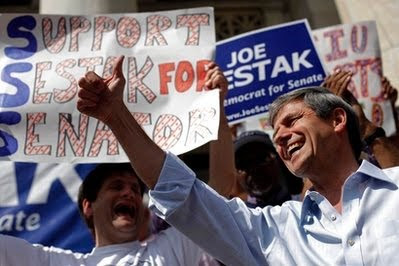 Sestak’s star has faded quickly. Following a couple of days of post-election glow, the Philadelphia-area congressman has become mired in a scandal. Sestak continues to be tight-lipped about what exactly the White House whispered last summer, when, according to him, a senior Obama aide dangled a top administrative post — some Chicago-style bait — in exchange for dropping his challenge to Specter. Though Sestak didn’t bite, the episode continues to haunt him.

Appearing on NBC’s Meet the Press on Sunday, Sestak clammed up when pressed for details. “It’s interesting,” he said, dodging David Gregory’s questions. “I was offered a job . . . anything that goes beyond that is for others to talk about . . . anybody else has to decide for themselves what to say upon their role, and that’s their responsibility.” But the White House has strangely gone silent, and beyond nervous confirmations of his previous statements, Sestak has, too.

Obama’s usually talkative, spinning West Wing crowd is doing its best to make this disappear. No Tweets. No in-house video. No Brian/Katie/Diane sit-downs. Just quiet. As Arthur Schlesinger might say, the presidency has gotten positively imperial. “Nothing inappropriate happened,” says White House press secretary Robert Gibbs. “I’m not going to get further into what the conversations were.” Obama consigliere David Axelrod promises that “it has been looked into.” Sestak’s spokesman tells us that “he has nothing more to add on this issue.”

While such stonewalling is common in Washington, if a United States attorney gets curious, Sestak and the White House could find themselves facing questions from a grand jury. “If someone in the White House asked Sestak to end his campaign in order to get him appointed to a federal office, then they were asking Sestak to commit a crime,” says Victoria Toensing, a former deputy assistant attorney general, criminal division, in the Reagan administration. “Politically, Sestak’s behavior is bizarre, because you either accuse someone or you don’t. You don’t just show a little ankle.”

Toensing points to U.S. Code title 18, sections 210 and 211, as areas of concern. “Section 210 states that whoever ‘offers or promises’ any ‘thing of value to any person’ — his Senate bid — ‘to procure any appointive office’ . . . ‘shall be fined under this title or imprisoned not more than one year, or both,’” she says. “If the White House put Sestak in a position to effectively offer his campaign’s end for a post, then they were treading in complicated waters.” At least two other sections of the same title, 595 and 600, are also potential problems.Rep. Darrell Issa (R., Calif.) calls the situation an “assault on our democracy” and “downright criminal.” He is asking the Justice Department to investigate. Some Democrats are also raising eyebrows. “I think what the White House should do is, to some degree, say, ‘Here are the facts,’” said Rep. Anthony Weiner (D., N.Y.) to MSNBC.

The Obama White House and Justice Department, however, are doing anything but. Justice has laughed off Issa’s request for a special prosecutor. “We assure you that the Department of Justice takes very seriously allegations of criminal conduct by public officials. All such matters are reviewed carefully by career prosecutors and law enforcement agents, and appropriate action, if warranted, is taken,” said assistant attorney general Ronald Weich, in a letter to Issa obtained by Politico. “The Department of Justice, however, has a long history of handling investigations of high-level officials professionally and independently, without the need to appoint a special counsel.” For his part, Sestak has promised to “absolutely” comply with any federal probe.

Meanwhile, the Obama administration’s hypocrisy in their non-response to tough questions from reporters — saying they hold themselves to a high ethical standard while ignoring repeated queries about ethics — “cuts against the Obama brand,” says Doug Sosnik, formerly President Clinton’s political director, to the New York Times. “The public tolerance for these deals is less than in the past.”

Regardless, Sestak, while probably in the clear legally, is hardly an innocent political lamb. Remember, when he was running against Specter, a party switcher, Sestak made the primary all about character. In his first television ad, a 60-second biographical spot, he highlighted his Navy career and values. Sestak’s ad man, Neil Oxman, told the Philadelphia Inquirer that it was that specific commercial that sealed the deal, by showing he was a “real” guy. “You rarely see that much movement from a positive spot,” he exulted.

Americans deserve to be told what Sestak knows. The line between transactional, horse-trading politics and abuse of power is very fine, and best evaluated by someone other than Axelrod and Gibbs. Besides, this Sestak flare-up is far from the first instance of unseemly deal-making under Obama’s watch. Last year, for example, the Denver Post reported that deputy White House chief of staff Jim Messina offered Andrew Romanoff, a Colorado Democrat, a job at USAID if he’d end his primary challenge to Sen. Michael Bennet. Like Sestak, he refused.

Why is Sestak afraid to say more? Three months ago he told The Ed Show on MSNBC that “to go further” than he has in explaining what happened “serves no purpose, because that’s about politics.” No, it’s about the law. Sestak should talk.

— Robert Costa is the William F. Buckley Jr. Fellow at the National Review Institute.
Posted by jtf at 7:08 AM