Jihad Jane in the Classroom

In the days after the 9/11 attacks, average Americans donated money and festooned American flags to vehicles in a show of unity and support. Educators, in contrast, took advantage for further anti-American indoctrination and plastered school walls with “Understanding Islam” posters. They did this at the University of Georgia where I was finishing up my Ph.D. program.

Since then, the Islamists have wormed their ways into our culture, reaching the most vulnerable: our children. 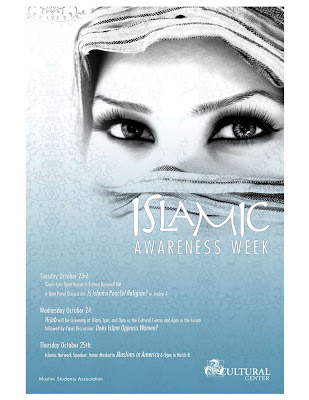 It is no surprise to me that blonde American women, like Jihad Jane and Jihad Jamie, would be converting to Islam and supporting jihad. The most depraved murderers on death row attract the support of soft-hearted and weak-minded women. They are aided by educators and the propagandists they invite into the classroom.

In fact, proselytizing occurs in high schools and colleges without a peep from principals or college presidents, who fret about such Christian symbols as Christmas trees on their campuses.

For example, for the second year, the Muslim Student Association is holding their Islamic Awareness Week at the Clarkston campus of Georgia Perimeter College in the Atlanta area. MSA Advisor Shyam K. Sriram, who teaches American Government and Political Science, in an email encourages faculty members to allow their students “to obtain extra credit for attending these myriad of events” and adds that he is “happy to sign off on any extra credit sheets.”

Not only is Sriram sending this to all instructors on campus through the e-mail list, but his Islamic Awareness Week provides the theme for the college’s home page and posters about the events plaster bulletin boards on campus. The student who wants to learn more about the event can click on a link and see the following list and the note, “Faculty are encouraged to give students extra credit for attending.”

These events for the week of March 16-19 include:

“The Sweetness of Faith” with Imam Ishmael ibn Paul Teasley.

“Sorry, Mama, But I Love Her: A Talk on Love, Patience and Relationships” with Imam Tariq Khan.

“Hijab for a Day” “Information Session for WOMEN only.”

The title “Sorry, Mama, But I Love Her” reminded me of a workshop I attended at the National Council for the Social Studies conference called “Muslim Perspectives Through [sic] Film and Dialogue: Understanding, Empathy, Civic Discourse.” There, Barbara Petzen (a blonde woman), an academic specializing in Middle East studies, and employed by the Middle East Policy Council, which has received multiple donations from Saudi Arabian royalty, offered sheep-like high school social studies teachers free films for use in the classroom.

One, which she showed, Allah Made Me Funny, about three young Muslim comedians—a Palestinian, an Indian, and an African-American convert–fits in with the lessons on “tolerance” teenagers receive from television and the classroom.

Its producer, Michael Wolfe, knows what will appeal to teenagers, for he himself is a convert and comes from what he calls a “mongrel” background of a mixed Jewish-Christian marriage. What was especially disturbing in the film was the black convert, who bragged about his loss of attraction to white women since his conversion. He had some tender-hearted bemusement for his poor, benighted old mother still stuck in the old Christian religion who was upset at his conversion. He could see into her plot to get him back to her church, for an “intervention” on him. (The camera panned to the wholesome Muslim audience of families in traditional and Western dress laughing good-naturedly.)

The talk by Imam Tariq Khan at Georgia Perimeter College (“Sorry, Mama, But I Love Her”) suggests a similar conflict between an adult child and parent. Converts are loving toward parents—although more enlightened. In this age of tolerance and following your own path Islam is presented as just another alternative—and a better, more tolerant, and more hip alternative at that.

One wonders what would happen were the script reversed. Would administrators allow a Methodist minister to put on a “Christian Awareness Week” at a community college? Would Muslims tolerate a film being shown to Muslim students at a public school, titled Jesus Made Me Funny, that poked fun at their parents’ Muslim religion, that joked about seeing through a parent’s attempt to intervene? Indeed, Muslim parents like those of Rifqa Bary, threaten and do kill children who convert to Christianity.

Of course, such facts never came up in the film or workshop. Petzen said to teachers, “What I love about these guys is that they’re normal.”

When an inconvenient fact comes up—like the violence that Muslims have displayed—those like Petzen offer defenses through moral equivalency. She gave lessons to social studies teachers to pass on to students about the rioting and murders after the publication of cartoons about Muhammad. Well, Christians would get upset too, she offered.

Yes, they have, when their tax dollars go to support artwork that immerses a crucifix in urine. But they don’t riot and murder over it.

Of course, educators are likely to present the Christians who opposed public funding of Andres Serrano’s “Piss Christ” artwork as close-minded and bigoted (as they have done in textbooks I’ve been required to use). They are likely to invoke the First Amendment.

Petzen objected to my characterization of her “defense” in the report I wrote about the conference. It was an “explanation,” she insisted.
Really? Her moral equivalency insults the intelligence of the civilized world. Everybody could understand being upset with the depictions in the cartoons. What they could not understand was the barbarism of the response. “Explanations” for violence, for behavior that defies every standard of Western civilization, makes every barbaric act more “normal.” And, indeed, “normalization” of Islam is the goal of Petzen and Sriram, and every other proselytizer in the classroom.

In 1983, “A Nation at Risk,” stated famously, “If an unfriendly foreign power had attempted to impose on America the mediocre educational performance that exists today, we might well have viewed it as an act of war.”

Some insist that “jihad” is misunderstood, that according to the Koran it involves moral cleansing and an intellectual effort. If so, we’ve got Jihad Janes in the classroom, proselytizing to already indoctrinated children and teenagers. This is indeed a “war” on the hearts and minds of students.

For my full report on the National Council for the Social Studies go here.
Posted by jtf at 5:48 AM

Email ThisBlogThis!Share to TwitterShare to FacebookShare to Pinterest
Labels: Education, Islam and The West