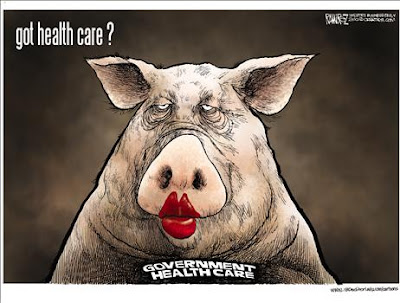 Well, it seems to be in the bag now. I try to be a sunny the-glass-is-one-sixteenth-full kinda guy, but it's hard to overestimate the magnitude of what the Democrats have accomplished. Whatever is in the bill is an intermediate stage: As the graph posted earlier shows, the governmentalization of health care will accelerate, private insurers will no longer be free to be "insurers" in any meaningful sense of that term (ie, evaluators of risk), and once that's clear we'll be on the fast track to Obama's desired destination of single payer as a fait accomplis.

If Barack Obama does nothing else in his term in office, this will make him one of the most consequential presidents in history. It's a huge transformative event in Americans' view of themselves and of the role of government. You can say, oh, well, the polls show most people opposed to it, but, if that mattered, the Dems wouldn't be doing what they're doing. Their bet is that it can't be undone, and that over time, as I've been saying for years now, governmentalized health care not only changes the relationship of the citizen to the state but the very character of the people. As I wrote in NR recently, there's plenty of evidence to support that from Britain, Canada, and elsewhere.

More prosaically, it's also unaffordable. That's why one of the first things that middle-rank powers abandon once they go down this road is a global military capability. If you take the view that the U.S. is an imperialist aggressor, congratulations: You can cease worrying. But, if you think that America has been the ultimate guarantor of the post-war global order, it's less cheery. Five years from now, just as in Canada and Europe two generations ago, we'll be getting used to announcements of defense cuts to prop up the unsustainable costs of big government at home. And, as the superpower retrenches, America's enemies will be quick to scent opportunity.

Longer wait times, fewer doctors, more bureaucracy, massive IRS expansion, explosive debt, the end of the Pax Americana, and global Armageddon. Must try to look on the bright side . . .
Posted by jtf at 4:11 PM