Green Jobs: The Road to Ruin

As a certain frog once observed, it ain’t easy being green. It’s not profitable either, but as environmentalists and their supporters in government retool their message they dearly want us to believe that a “green economy” will fill everyone’s pockets with greenbacks. Recent experience, not to mention common sense, shows that this is nonsense. Nonetheless, the Obama administration, environmental groups and many media mainstream media outlets are pushing “green jobs” and a “green economy” as ways to simultaneously solve America’s economic woes while avoiding any possible harm to the environment. 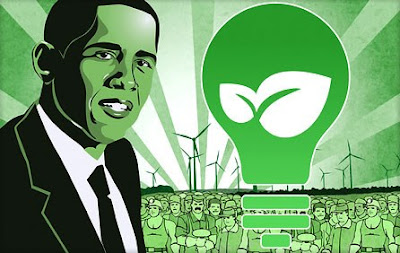 At a Chicago City Club luncheon a few weeks ago, an official with the Chicago Department of the Environment was introduced to the crowd. She waved happily and dutifully parroted the environmental movement’s latest slogan:

And we have this: Al Gore wants to “repower America!” Warming to the theme, the President of the United States would have America believe that green jobs and green power will not only put money in your pocket, they are the wave of the future. China’s doing it, the president says, do we want to be left behind?

Except that China’s not doing it. They’re paying lip service to “green power” as they happily build big coal-fired power plants at the rate of one per week, because it’s pretty obvious to the Chinese that cheap power is better for their economy than politically-correct power.

The purported nirvana of a green economy is the predictable response to “Climategate,” “Glaciergate,” “Amazongate” and all the rest of the revelations that have caused the public to doubt that our planet actually needs saving. If the science isn’t really settled and has in fact been manipulated for the sake of an agenda (climategate) is there really an environmental crisis to worry about? If glaciers aren’t going to melt in the next twenty five years (glaciergate) can the International Panel on Climate Change be trusted? If the rainforests are doing just fine, thank you (amazongate) is the situation as bad as global warming alarmists have led us to believe? It’s 2010 and panic just isn’t selling as well as it did five years ago. Accordingly, the global warming crowd is rebranding their product, saying in essence that even if you don’t believe in “climate change” it still makes sense to go green, because doing so will make everyone more wealthy along the way.

Arguably, no western nation has done more to go green than Spain. Indeed, President Obama has pointed toward Spain as the model of the sort of economy that the United States should aspire to create, one that relies heavily on renewable fuels for power. But, how has that worked out for Spain? In the midst of a worldwide recession, the Spanish economy stands out, because it is in worse shape than most, with unemployment hovering at around twenty per cent. According to a study conducted by Dr. Gabriel Calzada, an economics professor at Juan Carlos University in Madrid, the push to “go green” has been responsible for much of Spain’s recent economic woes. Calzada concluded that every green job created in Spain cost 2.2 traditional jobs. A green economy, it would seem, is hardly a formula for prosperity.

But one shouldn’t need the Spanish experience to realize that a green economy is inevitably a red ink economy. Common sense is all that is necessary. Wind power, the most popular form of renewable power, is fifty per cent to one hundred per cent more expensive than coal-fired power. Why? Because the people who develop wind farms have to pay off the banks notes for building all of those expensive windmills, shell out cash for operating and maintenance costs and fund the not inconsiderable costs of the infrastructure required to hook the windmills up to the grid. Add in the fact that you still have to back up wind farms with conventional forms of energy, like gas turbines, and wind power is inevitably more expensive than burning coal or natural gas. But for government subsidies and incentive programs, no one would be stupid enough to build a single windmill.

The same may be said of solar power, which is, by nature, horrendously expensive and inefficient, as well as biofuels, which often consume more energy than they produce, and a host of other green, renewable schemes to repower America in shades of green. There’s a reason that we need legislation to create a green economy: There is no free market, economic incentive to otherwise do so.

It’s worth noting that I myself have held what may be termed a “green job” for over twenty five years. Without environmental legislation, I would have had to pursue a career doing something that was actually productive. As it happened, I have spent my professional life poring over EPA regulations, pushing through the piles of paperwork that the regulatory system demands on behalf of my clients and carefully studying the latest environmental research. The only reason that a job like mine exists is that America has built a regulatory structure to protect the environment that is so enormously complex and impossible to understand that specialists are needed to figure out what the heck the average business person has to do in order to avoid the wrath of the EPA.

The worst part of this state of affairs is that, by and large, it’s not the big, bad corporations that require the services of people like me. Big power companies, oil refiners, etc. can afford their own specialists whom can lead those large corporations through the regulatory maze. Instead, it’s the small companies – those whom can least afford it – that are forced to look for outside help. They can’t afford their own dedicated environmental professionals, thus they are forced to fork over cash that they could have otherwise been using to improve their businesses and create jobs in order to retain expert consultants that can keep aggressive regulators at bay.

Leftists like Obama find nothing troubling in the green jobs paradigm, whether it means building expensive windmills or forcing small business to pay for specialists who keep the creeping hand of the bureaucracy at arm’s length. To liberals, the economy is a zero-sum game, so what could be wrong about redistributing billions of dollars? For those of us who believe that wealth is created, rather than something that exists in the abstract sense, the idea of a green economy is something far more sinister. If implemented, these green schemes won’t create wealth, they will instead sap America’s riches and we will all be the poorer for it.
Posted by jtf at 6:30 AM