Capitalism Fingered as Fiend of the Past Decade

Reducing “capitalism” to its alleged sins. 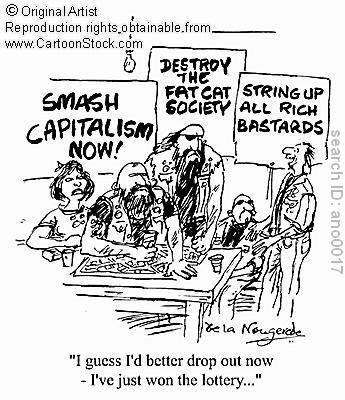 On the last day of 2009, that awful year, I was listening to a report on National Public Radio (yes, I’m a listener). Reporter Tamara Keith presented a by-now-familiar recap of the worst financial and corporate scandals of the decade, from Enron and Martha Stewart to Tyco and Bernie Madoff. It was a depressing slog of greed, venality, and theft. When the report was over, Morning Edition host Steve Inskeep summarized the report with a tart: “The decade in capitalism.”

I don’t want to single out Inskeep, since he was doing what pretty much the entire media establishment has done, particularly of late: reducing “capitalism” to its alleged sins.

And that’s the point. There are few areas of life where a thing responsible for so much good gets so little credit for it.

Imagine if I were to collect the most infamous deeds of African Americans over the last decade — say, Michael Vick’s dog-fighting scandal and O. J. Simpson’s most recent criminal exploit — and then put a bow on it with the phrase “the decade in black America.” What if I did the same thing with Jews? Bernie Madoff, the face of Jewish America! Do the scandals of Rod Blagojevich, Charlie Rangel, and John Edwards define the Democratic party from 2000 to 2010? Do Abu Ghraib and the balloon boy sum up America?

Consider NPR. As a brand, it claims to be standing athwart capitalism because it’s “public.” What that means exactly is a bit unclear, since it still allows corporations to fund its programming in exchange for audio endorsements none dare call commercials and relies on the kindness of listeners to keep it afloat — listeners who, one way or another, make their money from you-know-what.

Indeed, speaking of the decade in capitalism, National Public Radio failed to mention that Joan Kroc, widow of Ray Kroc, the founder of McDonald’s, left more than $200 million to NPR in 2003. Mrs. Kroc’s generosity of spirit was her own, but the wampum is all capitalism’s, baby.

In a similar vein, the decade of capitalism saw one of the world’s richest men, Warren Buffett, pledge more than $30 billion to a foundation created by another offspring of capitalism, Bill Gates, for the purpose of aiding the world’s poor. Surely capitalism should get some of the credit, since the book on philanthropy in non-capitalist systems is shorter than the guide to cities without Starbucks.

But forget philanthropy. Since 2000, hundreds of millions of people in China and India — home to a plurality of the world’s poor — have lifted themselves out of poverty and illiteracy thanks to capitalism.

China started to embrace markets as a last resort in the late 1970s. And by last resort, I mean last resort. First they tried murdering tens of millions of their own people through collectivism and oppression. When that didn’t work, they embraced markets, and the poverty rate dropped from 64 percent to around 8 percent today.

As it always does, capitalism drove innovation over the last decade. The BlackBerry was introduced in 1999, but the iPhone didn’t exist in 2000, nor did the iPod. YouTube was a fantasy, and no one could even imagine why you’d ever need something like Facebook or Twitter (in fairness, some people still ask that question). iTunes was launched in 2003, and five years later it was outselling Wal-Mart as the No. 1 music retailer. Government-funded basic research in medical science deserves some credit for breakthroughs, but it’s worth remembering that lots of countries invest in basic research. America, with its markets, stands alone as the leading, arguably sole, source of medical innovation. Breakthrough drugs are as American as apple pie.

Every good thing capitalism helps produce — from singing careers to cures for diseases to staggering charity — is credited to some other sphere of our lives. Every problem with capitalism, meanwhile, is laid at her feet. Except the problems with capitalism — greed, theft, etc. — aren’t capitalism’s fault, they’re humanity’s. Socialist countries have greedy thieves, too.

Free markets are in disrepute these days, particularly by the people running Washington. For them, government is the solution and capitalism is the problem. If they have their way over the next decade, they won’t cure what allegedly ails capitalism — people will still steal and lie — but they will impede everything that makes capitalism great. And that will be bad for everyone, even NPR.

— Jonah Goldberg is editor-at-large of National Review Online and the author of Liberal Fascism: The Secret History of the American Left from Mussolini to the Politics of Meaning. © 2010 Tribune Media Services, Inc.
Posted by jtf at 1:27 PM