Naturally, the hapless Janet Napolitano resorted to the now-standard pronouncement — before any meaningful investigation can be done — that there is no indication the terrorist who tried to bring down the flight is part of a larger terrorist plot. On this occasion, there was even less basis for this idiocy than usual: The Nigerian jihadist, Umar Farouk Abdul Mudallad, reportedly told the FBI he was trained by al Qaeda in Yemen. Even if he were ultimately proven to be lying about that, it is at least an indication of a larger plot — as is the similarity between this incident and Richard Reid's al Qaeda-backed attack in 2001. 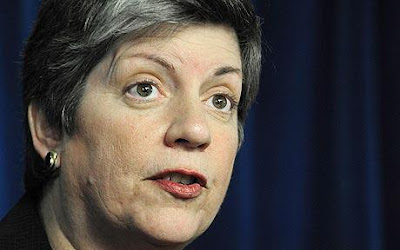 That is to say, indications of a larger plot abound. The prudent course is thus to say, "We are aggressively investigating all possibilities" and leave it at that. At this premature stage, no sensible person would be surprised to hear that; but saying it suggests we might be open to the possibility that there's a massive international Islamic terror conspiracy — can't have that.

In any event, ABC News is now reporting not only that al Qaeda has taken credit for the foiled attack (and is promising more of the same) but that former Gitmo detainees released in 2007 may be behind it. The ABC report is probably right in its conclusion, but it is flawed in some important details. For example, one of the former detainees it cites, Muhammad Attik al-Harbi, is probably not in Yemen right now — having recently surrendered to Saudi Arabia for re-immersion in its laughing-stock re-education program. But ABC fails to mention another Gitmo alum, Ibrahim Rubaish, who is a major al Qaeda player in Yemen, as is Said al-Shihri, who is mentioned in the ABC report — though they call him "Said Ali Shari." They may very well be complicit.

For a better sense of the potentially involved Yemeni players, check out this Tom Joscelyn post at the Standard's blog. Aside from the fact that Tom knows more than anyone in America about the Gitmo detainees (at least anyone who only has access to public information), the remarkable thing about his analysis is that it was done two days ago — when our Homeland Security Secretary was spouting her "no indication of a larger terrorist plot" nonsense while celebrating that "the system worked."